Your Word Against Mine – Dragonfly Games presents: Libretto 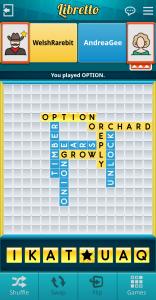 CALIFORNIA, UNITED STATES, June 8, 2022 /EINPresswire.com/ — While everyone has heard of word games, nobody has yet seen anything like Libretto. The passion project of Michael Wilk, this unique game melds the best features of traditional word games with those of strategy games for a one-of-a-kind experience that is both challenging and addicting.

According to Wilk, the game was inspired by a desire to create a word game that would appeal to Scrabble players but not simply be a clone like Words With Friends.

In Libretto, each player has their own color of playing tiles, and the goal is to make a path of words between the left and right sides of the board using only their tiles. Plays can be made offensively or defensively, and good players think several moves ahead to determine their best play. Many have called Libretto “chess with words.”

Libretto is perfect for anyone who loves a good Scrabble-esque game but is looking for something with more depth. Because words can be placed virtually anywhere on the board, players have far more playing options than in Scrabble, allowing the clever player to surprise their opponent with an unexpected play. Players can employ all sorts of strategies to win, and even Wilk says he’s still finding new methods after ten years of playing.

Wilk initially created a prototype for Libretto playable in web browsers. After the game proved itself in that format, he knew the next step was to bring it to mobile devices. After going from studio to studio searching for a team with the right skill set, he finally found mobile game programmer Will Burgers. Together, they transformed the Libretto prototype into a working product.

An updated version of Libretto was released in May of 2022 and is available for iOS and Android devices. It has been met with positive reviews, with players praising its originality and addictiveness.

But according to Wilk, this is just the beginning. While the current version of the game is full-featured and stable, and they’d like to start by just getting people to try it out, there are plans to add new features, such as a tournament mode.

When looking for a new and challenging strategy word game, look no further than Libretto. Scrabble champion Joe Edley calls Libretto “fascinating” and “an equal or better word game” than Scrabble. Download Libretto today to see if you agree!