WISEACRE’s Tiny Bomb is the best-selling Tennessee-made craft beer and the #5 Craft Pilsner in the country. 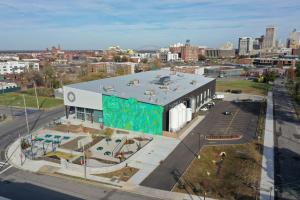 In 2020 WISEACRE built a state-of-the-art production facility in Downtown Memphis that nearly quintupled its brewing capacity. 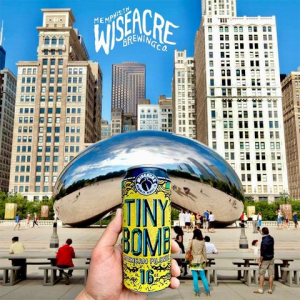 WISEACRE returns to Chicago after a two-year distribution pause due to COVID.

Memphis-based brewery’s Tiny Bomb Pilsner and other year-round beers return to the Windy City after a more than two-year COVID-induced hiatus.

After a two-year hiatus, we’re sure that Tiny Bomb, the best-selling Tennessee-made craft beer and the #5 Craft Pilsner in the U.S., is going to explode on its reentry into the Chicago market!”

MEMPHIS, TENNESSEE, USA, September 27, 2022 /EINPresswire.com/ — WISEACRE Brewing Company today announces its plans to re-launch distribution throughout the greater Chicagoland area this week, after a more than two-year hiatus due to the COVID-19 pandemic. Thanks to a distribution partnership with Lakeshore Beverage, three of WISEACRE’s beers – Gotta Get Up to Get Down Coffee Milk Stout (made with Chicago’s Metropolis Coffee) and the Great American Beer Festival Bronze Medal-winning Tiny Bomb Pilsner, as well as a rotating seasonal beer lineup (which will soon feature Strizzle IPA) – will be available throughout Chicago, including nearly 30 Binny’s locations.

“Shortly after COVID hit in March 2020, we stopped shipping beer up to Chicago. There was so much uncertainty at the time, and so much disruption to our industry since, that we are just now able to relaunch with real purpose. In 2020 we were finishing our new facility, so we had our hands full, as did our partner Lakeshore Beverage, so we hit PAUSE,” said Kellan Bartosch, co-founder of WISEACRE. “This pause gave us the time to rethink Chicago sales strategy so that we could really come back with a bang. And, speaking of bangs…we’re sure that our Tiny Bomb, which is the best-selling Tennessee-made craft beer and currently the #5 Craft Pilsner in the United States, is going to explode on its reentry into the Chicago market!”

“Chicago is one of the best beer cities in the country,”added Davin Bartosch, WISEACRE brewmaster and co-founder. “Consumers, stores, bars, and restaurants all have a great understanding of beer. Part of that means the craft beer scene isn’t solely focused on hoppy styles and bigger beers. There is a great understanding of the challenge of making lagers and appreciation that comes from it. Memphis’ soft water – which has been called “the sweetest water in the country” – is very similar to the water of Plzen, Czech Republic, where the original Pilsners were brewed in the 1800s. Tiny Bomb marries that perfect Memphis water with German pilsner malt and local wildflower honey for a crisp, clean finish.”

WISEACRE will kick off its Illinois relaunch with events around town at Black Sheep, Sheffield’s and The Beer Temple, where WISEACRE placed second in their “Search for the Perfect Pilsner” blind tasting competition in 2020. Details for those events are as follows:

“From my brother’s time in brewing school in Chicago to the start of his professional brewing career there, it has always been a special city to us for both beer and non-beer reasons. Because of his friendships from his time brewing here, we’ve had the opportunity to collaborate with some amazing Chicago breweries, like Off Color, Half Acre, Haymarket, Solemn Oath and others,” said Kellan. “Most of our team will be in Chicago to support the launch. We’re also excited to partner with CounterMeasures and their Chicago-based sales reps – because they are local, they really understand what both our distributors and our on- and off-premise accounts need. We didn’t anticipate that our COVID hiatus from Chicago would take as long as it did, but it ended up working out for the best because it gave us the time to put together a great plan.”

ABOUT WISEACRE
WISEACRE Brewing Company opened in Memphis, Tennessee in 2013 after brothers and Memphis natives Davin and Kellan Bartosch gained experience working in the brewing industry around the country and overseas, including Davin’s brewing studies at Doeman’s Academy in Germany. Since then, WISEACRE has grown to have two brewery and taproom locations, more than 60 employees and distribution in 17 states and the District of Columbia, and has made more 170 beers ranging from German lagers, to hoppy American styles, complex and boozy Belgian beers, and barrel aging beers.

Share
Facebook
Twitter
WhatsApp
Previous articleDiscover How to Reduce Stress, Anxiety and Mom Guilt, While Raising Happy, Healthy and Non-Entitled Kids
Next articleRespiratory Syncytial Virus (RSV) Market is Expected to Grow at a CAGR of 14.9% by 2027
RELATED ARTICLES
EIN Presswire