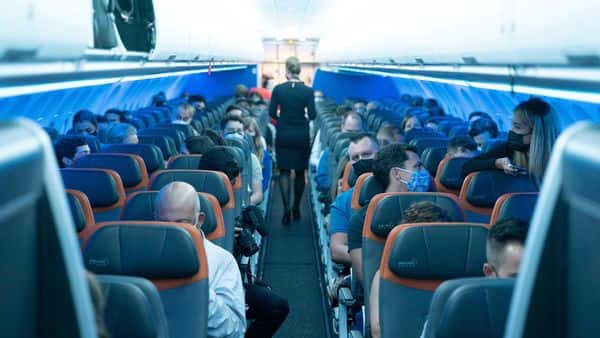 Scientists have found a sharp increase in possible spread during in-flight meal service when everyone has masks off. They’ve also learned more about the importance of precautions during boarding and deplaning.

The chances of viral spread aboard planes remain very low. But papers published in medical journals suggest they may not be as low as suggested earlier in the pandemic.

“It’s still, at this point, safe to travel if you take proper precautions,” says Mark Gendreau, chief medical officer at Beverly Hospital near Boston and an expert in aviation medicine. “I do think it could be safer.”

As international travel begins opening up more, with the U.S. set to relax restrictions for vaccinated travelers from 33 countries in November, more travelers will dig into in-flight meals. A recent medical study by a group at the University of Greenwich in London finds a 59% higher risk of viral transmission during a one-hour meal service on a 12-hour trip compared with staying fully masked for the whole flight.

The study, published in the Journal of Travel Medicine this spring, modeled aerosol dispersion in an aircraft cabin. It found that if all passengers wear masks throughout a 12-hour flight, the average infection probability can be reduced by 73% with high-efficiency masks and 32% for low-efficiency masks.

The problem comes if everyone removes their masks at the same time. The researchers’ suggested remedy to the food issue: Stagger meal delivery so only half of passengers eat at once and adjacent passengers remain masked.

That’s probably more than most hungry travelers will tolerate, and airlines say they’re sticking with standard meal-service patterns. Passengers can help protect themselves by avoiding eating while a seatmate eats, unless it’s someone they know.

Recently published research has also shown that boarding and deplaning present more transmission risk than when the plane is aloft.

That’s because people cluster and breathe on top of one another, especially pulling and pushing bags in overhead bins. When seated, aircraft ventilation systems, originally designed to quickly remove cigarette smoke from cabins, are very effective at moving air straight down, filtering it with hospital-grade equipment, and mixing it with 50% outside air before returning it to the cabin.

“We’ve studied the passenger cabin and the ventilation system fairly rigorously,” says Dr. Gendreau, who is frequently asked to peer review travel studies. He offers a warning that even research published this year was done with earlier variants of Covid-19 circulating, not the more contagious Delta variant.

Recent studies have found that masking does reduce the risk of infection and using the air gasper—the overhead air nozzle that can be adjusted on many airplanes—does work at quickly scattering viral particles. Even if it makes you cold, it’s worth opening it full blast and aiming it in front of your face.

And while evidence is conflicting, it appears from the medical research that business class and first class are areas of lower transmission risk because passengers sit farther apart.

Spreading Covid-19 by travel gets a lot of attention. Public-health experts say airplanes have spread the pandemic virus around the globe by transporting infected travelers. In addition, fliers worry about one passenger infecting many because of the cabin’s close confines.

But the risks do appear very small for onboard spread. A recent review of medical research published by the Journal of Travel Medicine on Sept. 3 found 18 studies world-wide on in-flight Covid-19 transmission that documented 273 “index cases”—passengers who brought the virus onboard—and 64 “secondary cases”—59 passengers and five crew members found to have been infected in-flight. Two other studies examining wastewater on airplane flights found evidence that infected passengers were likely onboard.

The review did include one big caveat: The quality of evidence from most published studies was low because of weak contact tracing.

“We know more, but it’s prompted more dilemmas and more challenges,” says Dr. Aisha Khatib, a travel-medicine expert at the University of Toronto who is one of the authors on a review of scientific studies of transmission risks on airplanes.

“On longer flights, it is not feasible to avoid eating and drinking,” IATA’s medical adviser, Dr. David Powell, said in a written response to questions. “It needs to be remembered that the in-flight phase is not likely to be one of the highest-risk phases of the journey.”

A spokeswoman for American Airlines says that on long domestic and international flights, meals in coach and premium cabins are served in a single service rather than multiple courses to reduce touchpoints between customers and crew and speed up unmasked meal time. American has also suspended serving alcohol until Jan. 18.

Because of deplaning congestion concerns, some airlines in Europe are telling customers to remain seated until their row is called to disembark. Some U.S. airlines tried that in the early days of the pandemic. Now the crew just gets out of the way of the thundering herd.

United Airlines says it has told pilots to keep airplane ventilation systems running during boarding and deplaning to maximize airflow. Not every airline does that.

Michael Schultz, an engineer at the University of Dresden’s Institute of Logistics and Aviation in Germany, has studied boarding and deplaning extensively. He says standard boarding creates a substantial number of possible transmissions if a contagious passenger is present.

Random boarding sequences, where passengers aren’t all piling into the same rows at the same time, would be better to reduce possible transmission, he says. Even more important would be restricting hand luggage so that one passenger isn’t struggling to push something into an overhead bin while breathing on top of a seated passenger. Reducing carry-ons can reduce transmission risk by about 75%.

Some precautions would never fly with airlines, like having more passengers board by walking across the tarmac outdoors rather than in poorly ventilated jet bridges.

One paper currently undergoing peer review is recent enough to take the more contagious Delta variant into account—and suggests more risk for travelers. Researchers in Hong Kong traced a cluster of 50 Covid-19 cases to a flight from New Delhi to Hong Kong with 146 passengers in April 2021. Only 20% were symptomatic; eight of the positive cases were detected in children under 2, who were exempt from masking requirements.