Handbells resting during a performance. 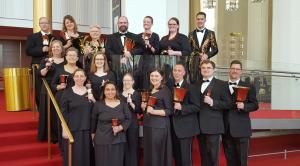 The Virginia Bronze handbell ensemble under the direction of Brian Seemann.

Concert on New Year’s Day will highlight the history and heritage of the United Kingdom through the lens of music performed on bells.

We’re thrilled to welcome back to the National Bell Festival the luscious resonance of Virginia Bronze with a concert that promises to be unforgettable!”

WASHINGTON, D.C., USA, November 26, 2022 /EINPresswire.com/ — Ring in the New Year with the scintillating harmonies of Virginia Bronze – returning favorites of the National Bell Festival and the Washington, D.C.-region’s premier handbell ensemble. Across hundreds of bronze bells, expect rich acoustics and soul-stirring melodies as the 16-member ensemble performs new and beloved pieces. Each performance by Virginia Bronze is characterized by thoughtful musical selections and fascinating insights into the world of handbells.

Hosted at the historical St. John’s Church, Lafayette Square, at 1525 H St. NW, Washington, D.C. 20005, the event will begin at 3:30pm on Jan. 1, 2023. The performance will last approximately 45 minutes. This event is free and open to the public. Advanced registration is encouraged.

“The British are coming!”

What music will you hear this New Year’s Day? The National Bell Festival has curated a wonderful program themed to the 2023 spotlight nation: the United Kingdom. You’ll be treated to familiar British favorites, as well as captivating new pieces selected especially for the occasion.

Suspended above it all is the 200-year-old bell within St. John’s steeple, cast by the son of one of America’s legendary founding fathers – Paul Revere – whose swift midnight ride gave advanced notice to patriots of the approaching British forces.

History and faith ring to life at St. John’s.

From its organization as a parish in 1815 until today, St. John’s Church has been a powerful symbol of faith in the heart of our nation’s capital. St. John’s was designed at a stately location directly in front of the White House by noted architect Benjamin Henry Latrobe. Perched above this ‘church of the presidents’ rings a bell of historical significance.

The bell in St. John’s steeple weighs nearly 1,000 lbs. It was cast by Paul Revere’s son, Joseph, at his Boston foundry in August 1822, and installed November 30, 1822. President James Monroe authorized a $100 contribution of public funds toward its purchase, as it also served as an alarm bell for the neighborhoods and public buildings in the vicinity of the church.

St. John’s bell is one of two Revere bells in Washington, both cast and installed in churches during 1822. However, of the two, St. John’s bell is the only one that has been in continuous service since its installation.

As a premier handbell ensemble just across the river from our nation’s capital, Virginia Bronze has performed with the Washington Chorus, the Cathedral Choral Society, Gay Men’s Chorus of Washington, D.C., and the Alexandria Symphony. The ringers have been presented at the Concert Hall of the John F. Kennedy Center for the Performing Arts and The Music Center at Strathmore, and are artists-in-residence at the George Washington Masonic National Memorial.

About the National Bell Festival:

The National Bell Festival is on a mission to celebrate and restore bells in America. Each year on New Year’s Day, the festival rings in the New Year with free community events across the U.S. and across the world. The organization also works throughout the year to restore historic bells and bell towers to their former thundering glory.

The National Bell Festival’s work supports the United Nations’ Global Goal No. 11 for Sustainable Development: Protecting the World’s Cultural and Natural Heritage, and is enabled, in part, by a Google for Nonprofits grant. Learn more about the National Bell Festival and the lineup of events and experiences on New Year’s Day by visiting: Bells.org