Iran’s nationwide uprising is marking its 65th day on Saturday as the country sees all gatherings quickly evolve into anti-regime protests. Funerals and memorial ceremonies were held in many cities on Friday for protesters killed by the security forces. 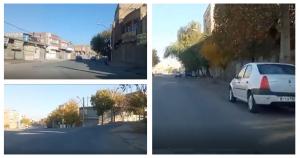 On Saturday merchants in many cities throughout Iran went on strike in solidarity with the country’s nationwide uprising against the mullahs’ regime. Activists in the cities of Zahedan and Iranshahr Tabriz, and Tehran provided footage of such strikes. 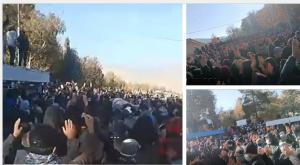 During the protest in Shiraz, the regime showed zero tolerance toward protests and opened fire on the peaceful rally. The protesters held their ground and resisted, despite this the regime, ordered the repressive forces to open fire on the crowd. 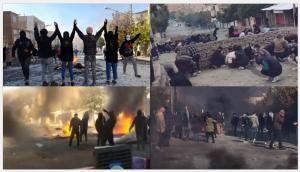 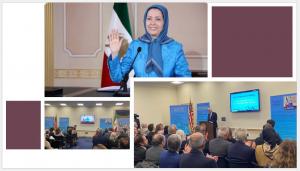 NCRI President-elect Maryam Rajavi held an online conference with members of the U.S. House of Rep. focusing on how the Iranian people are seeking regime change in Iran through their organized resistance, and what they expect from the international community.

In Sanandaj Situation is growing especially tense as security forces attacked students and opened fire on their protest. Also, students counted their protests.

In the restive city of Mahabad in West Azerbaijan of northwest Iran, a large crowd of locals participated in the funeral ceremony of Kamal Ahmadpour who was killed yesterday by the security forces.”

PARIS, FRANCE, November 21, 2022 /EINPresswire.com/ — Iran’s nationwide uprising is marking its 65th day on Saturday as the country sees all gatherings quickly evolve into anti-regime protests. Funerals and memorial ceremonies were held in many cities on Friday for protesters killed by the regime’s security forces during the ongoing uprising.

Protesters have also been constantly targeting the offices of Khamenei’s local representatives in cities and towns, so-called “seminaries” used by the regime to spread their ideology of hate, misogyny, and fundamentalism, local offices of members of the regime’s Majlis (parliament), sites of the Revolutionary Guards (IRGC) and the paramilitary Basij, and attacking security units and forcing them to flee while torching their vehicles and motorcycles.

Security buildings in many cities across the country, especially in Kurdish areas, have been stormed by protesters and fallen into the locals’ hands.

Protests in Iran have to this day expanded to at least 231 cities. Over 600 people have been killed and more than 30,000 are arrested by the regime’s forces, according to sources of the Iranian opposition People’s Mojahedin Organization of Iran (PMOI/MEK). The names of 466 killed protesters have been published by the PMOI/MEK.

On Saturday merchants in many cities throughout Iran once again went on strike in solidarity with the country’s nationwide uprising against the mullahs’ regime. Activists in the cities of Zahedan and Iranshahr in Sistan & Baluchestan Province, Sanandaj, Tabriz, Tehran, and Shahin Dej were among the first to report and provide footage of such strikes.

In the restive city of Mahabad in West Azerbaijan Province of northwest Iran, a large crowd of locals participated in the funeral ceremony of Kamal Ahmadpour who was killed yesterday by the regime’s security forces.

Anti-regime protests continue in this city and reports from the city of Divandarreh in Kurdistan Province indicate locals have set ablaze the office of Khamenei’s local representative.

In Piranshahr, locals held protest rallies and clashed with security forces dispatched to suppress them.

In Zahedan, local activists are reporting that protesters are establishing control of their streets with roadblocks and fires.

Students at Shiraz University gathered outside the Kharazmi Library protesting authorities’ decision to dispatch special anti-riot units to their campus. They were seen chanting “Freedom! Freedom! Freedom!” which has become a hallmark slogan of the ongoing Iranian revolution.

Protests and strikes continued throughout the day in several provinces and cities across Iran. Shop owners in Malekan, Chabahar, Marivan, Piranshahr, and Saqqez joined national strikes against the regime.

The situation in Sanandaj grew especially tense as security forces attacked students and opened fire on their protest rallies. In Qods City too, security forces cracked down on student rallies and violently arrested several youths.

Meanwhile, another intense round of protests took place in Shiraz, where a large crowd gathered for the funeral of Sajjad Ghaemi, another civilian murdered by security forces. Protesters chanted anti-regime slogans and called for regime change.

In other parts of the country, protesters continued to target regime buildings, institutions, and icons.

In Ilam, protesters responded to the regime’s brutal crackdown by setting fire to several buildings belonging to the IRGC and other regime institutions. In Anar, protesters set fire to a large poster of Qassem Soleimani, the former commander of the terrorist IRGC Quds Force that the regime tries to glorify as a hero.

Friday’s protests began with protests rallies at the funerals of civilians killed by security forces in recent days. In Izeh, a large crowd gathered at the funeral of Kian Peerfalak, a ten-year-old child shot and killed by security forces on Wednesday. The ceremony turned into a mass protest rally. Protesters were chanting, “Death to Khamenei!” calling for the overthrow of the mullahs’ regime.

In Mahabad, people gathered at the funeral of Azad Hosseinpour, another youth killed by security forces. The mourners held protest rallies, in which they reiterated the values that have been underlined by the people’s revolution, which are freedom and equality.

The protesters were chanting, “Kurds, Baluchis, Azeris; Freedom and equality!” sending a message of national solidarity and unity in contrast to the regime’s goal to divide the people across ethnic and religious lines.

In Tabriz, a large crowd gathered at the funeral of Aylar Haghi, another victim of the regime’s brutality. The ceremony turned into a massive protest rally, with protesters chanting, “This is the year Seyed Ali (Khamenei) is overthrown!”

The protesters also vowed to continue the path of Aylar and other protesters murdered by the regime’s repressive forces. “We are all Aylar and we’ll fight to the end!” the protesters were chanting.

In Semirom of Isfahan Province in central Iran, people gathered at the funeral of Morad Bahramian, also killed by security forces. As in other locations in Iran, the funeral turned into an anti-regime protest with demonstrators calling for the overthrow of the regime.

Meanwhile, protests continued in Mahabad, where locals continued to chant anti-regime slogans. The regime’s security forces tried to quell the protests by opening fire on the demonstrators.

Protesters resisted by setting roadblocks and throwing rocks at the anti-riot forces. In response to the regime’s repression, the protesters set fire to a Basij base the repressive forces were using.

At the same time, there were intense protests in Sistan and Baluchestan provinces, where people gathered for large rallies following the Friday prayers.

Large protest rallies were reported in the cities of Zahedan, Saravan, Iranshahr, Khash, Rask, and Chabahar. As in previous weeks, the regime’s security forces opened fire on the protesters but failed to quell the demonstrations.

One video from Iranshahr shows security forces directly firing at protesters with assault rifles. The protesters resisted with bare hands while chanting anti-regime slogans such as “Death to Khamenei!” “Death to the dictator!” and “I will kill those who killed my brother!”

Protest rallies also continued in Dehgolan, Kamyaran, Bijar, and Paveh. Protesters lit fire, chanted anti-regime slogans, and clashed with security forces that were dispatched to crack down on the demonstration.

Protests also took place in several cities across other parts of Iran, including Jiroft, Khoy, Ilam, and Khomeini. In Sari, northern Iran, protesters torched a building that belongs to the regime. In Tuyserkan, protesters set fire to a Basij base in response to the brutal crackdown on the protests.

In recent days, protesters have been increasing their attacks on the offices of Majlis members who recently called for the execution of all protesters arrested in the ongoing protests and uprising across the country.

This has sparked outrage among protesters and many people across the country are taking their anger against the Majlis members’ offices and sending messages that their Iranian opposition coalition the National Council of Resistance of Iran (NCRI) President-elect Maryam Rajavi held an online conference with members of the U.S. House of Representatives focusing on how the Iranian people are seeking regime change in Iran by the people of Iran and their organized resistance, and what they expect from the international community.

“I want to express the Iranian people’s shared desire in their continuous fight against the mullahs across the nation in the past two months. They ask the world to recognize their struggle to topple the regime and their fight against IRGC,” she said.

“The Iranian regime considers the MEK as its main existential threat. The defining benchmark for relations with foreign countries particularly in Europe and the US is their position on the MEK. Shouldn’t a regime that has killed at least 57 children in the last two months, executed 30,000 political prisoners during the 1988 massacre, and killed more than 1,500 protesters in November 2019, be overthrown? No state should hesitate to recognize the regime’s overthrow by the Iranian people,” the NCRI President-elect emphasized.

“Today, a revolution is underway in the making in Iran. Among the defining characteristics of the uprisings is their highly organized nature which is the result of the efforts and sacrifices of MEK Resistance Units and their organized network across Iran. They have effectively paved the path, encouraging youth to revolt against the regime,” Mrs. Rajavi explained.

The protests in Iran began following the death of Mahsa Amini. Mahsa (Zhina) Amini, a 22-year-old woman from the city of Saqqez in Kurdistan Province, western Iran, who traveled to Tehran with her family, was arrested on Tuesday, September 13, at the entry of Haqqani Highway by the regime’s so-called “Guidance Patrol” and transferred to the “Moral Security” agency.

She was brutally beaten by the morality police and died of her wounds in a Tehran hospital on September 16. The event triggered protests that quickly spread across Iran and rekindled the people’s desire to overthrow the regime.