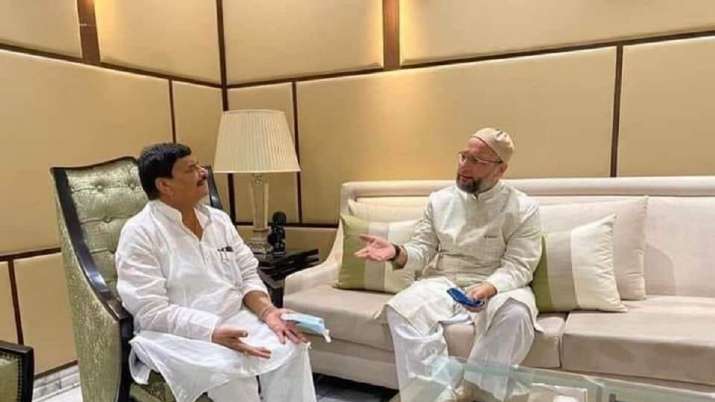 Asaduddin Owaisi, who had already announced that his party AIMIM will contest on 100 seats, is looking for a strong partner in the state, as he does not have a big face in UP.

It was an hour long meeting between Owaisi and Shivpal Yadav at his residence at Vikramaditya road. Owaisi termed Shivpal a big leader, however, the latter did not say anything on the development.

On Tuesday, Owaisi sought an appointment with Shivpal Yadav and reached his house around 7.30 pm.

Owaisi had fielded 38 candidates in the 2017 UP Assembly Elections, out of which 37 were forfeited.

Owaisi is now eyeing those 100 seats in Muslim majority regions.

The Muslim vote in Uttar Pradesh is about 19 per cent but in about 143 seats, they don’t really matter.

There is 40 to 45 percent Muslim votes in about 75 assembly seats and 20 to 30 percent in other 70 seats. However, Owaisi is somehow not sure that whether he will be able to consolidate all the Muslim votes, therefore, he is trying to meet Shivpal Yadav.

On the other side, Shivpal Yadav has clearly indicated that his first choice is the Samajwadi Party. Shivpal has said that he wants Akhilesh Yadav to become the chief minister. It is being said that Shivpal is waiting for the reply of Akhilesh Yadav and is also keeping his options open.

ALSO READ | Who will be next Mahant of Baghambari Muth in Allahabad? Narendra Giri reveals in suicide note