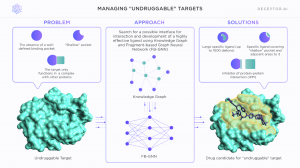 The overview of Receptor.AI’s approach to undruggable targets

The AI approaches for beating undruggability

LONDON, UNITED KINGDOM, August 14, 2022 /EINPresswire.com/ — The most frightening word in modern drug discovery is “undruggable”. This rather vague term means that it is notoriously hard or even impossible to find a drug which would act upon a particular molecular target (most often the protein).

According to recent estimates, up to 85% of all human proteins are considered undruggable. In reality, the whole modern pharmaceutical industry is working with a rather limited set of “good” target proteins which are known to interact well with drugs of a particular chemical nature. The vast majority of functionally important proteins known to be associated with diseases are never utilized as drug targets.

The reasons for undruggability are diverse and range from the “unfortunate” molecular structure of the protein to its “bad luck” in a completely unscientific, mystical sense:

1. The protein may lack a well-defined binding pocket on its surface, which could have been accessed by the drug molecule;

2. The binding pocket could be very shallow, forming only a few molecular interactions;

3. The protein may only function properly in supramolecular complex with other proteins;

4. The structure of the binding pocket could be shared by several different proteins, which leads to the lack of drug selectivity;

5. In order to bind effectively to the target protein, all drugs may share the same structural motif, which appears to be toxic or otherwise problematic in terms of the whole organism;

6. Sometimes, the drugs for a particular target don’t pass the clinical trials for many years, one after the other and nobody wants to invest in yet another failure;

7. Finally, sometimes the reasons for undruggability are just unknown.

Most drug discovery companies are trying to address undruggable targets using a huge variety of techniques. Receptor.AI doesn’t stay aside from this trend. Recently, we started working on our own platform for targeting previously undruggable proteins.

Our approach is pragmatic and based on our experience with “good” druggable targets.

– We don’t address all undruggable targets but concentrate on the most common cases of undruggability instead.

– We continue to work with the classical small molecules workflow (although the compounds could be not so small in this case).

– We prioritize the ease and low cost of synthesis of our drug candidates despite the “weird” nature of their targets.

The first class of undruggable targets which we intend to address are multimeric protein complexes, which form the functional binding interface between their subunits. The proteins, which work in isolation, are mostly enzymes. All the rest of our proteome is somehow involved in protein-protein interactions, but not all of these interactions are druggable. We focus on stable protein-protein complexes, which form well-defined inter-protein interfaces. Such interfaces could be targeted by small molecule drugs in a similar way as binding pockets of isolated proteins.

The first obstacle on the way to such multimeric targets is getting their 3D structure. We utilize X-ray crystallography, NMR or Cryo-EM structural data, homology modelling and de novo structure prediction using the famous and the most precise AlphaFold2 algorithm.

Once the structure of the protein assembly is determined, we optimize and equilibrate it using molecular dynamics simulations.

Finally, the crucial AI-based stage begins. Our proprietary ML model is able to recognize which chemical groups are going to bind favourably in different parts of the protein-protein interface. Another state-of-the-art deep learning model utilizes this information to perform sophisticated virtual screening coupled with on-the-fly molecular generation and assigns a binding score for each prospective compound. Such AI scoring is extremely fast, allowing for screening of enormous chemical spaces and probing large protein-protein interfaces.

The resulting compounds are guaranteed to be not only chemically correct but also easy to synthesize. Obtained compounds contain the chemical features which allow them to bind strongly and selectively to a specific protein-protein interface.

Proteins with shallow binding pockets are common and impose a strong challenge for drug discovery. The number of possible non-bonding interactions between the drug and the pocket is very limited, which makes the binding not only weak but also less selective.

To overcome this problem, we developed a technique which utilizes areas of protein surface around the pocket to increase the number of useful molecular interactions. We specifically prioritize larger compounds, which stretch outside the pocket and additionally anchor themselves around it. Despite the unspecific nature of binding outside the pocket, it assists in keeping the drug in place and allowing weak interactions inside the pocket to facilitate selectivity.

In many cases, the protein-protein interfaces do not form any cleft of pocket, which could be targeted directly. Instead, the coupling of the proteins in the assembly could be prevented from inhibiting their function. In such a case, the prospective drug should mimic one of the partner proteins and bind to the other partner to prevent the assembly.

However, the peptides are not always the most desirable drugs due to their poor stability against proteases, high toxicity, suboptimal bioavailability and problems with crossing the cell membranes. We utilize a slightly different approach. We plan to design rather large non-peptide compounds, which expose the same chemical groups as the partner protein does. We intend to achieve this by tailoring the compounds to the spatial set of pharmacophores deduced from the partner protein surface. The resulting compound is not a peptide, which makes it stable against proteases and other metabolic transformations.