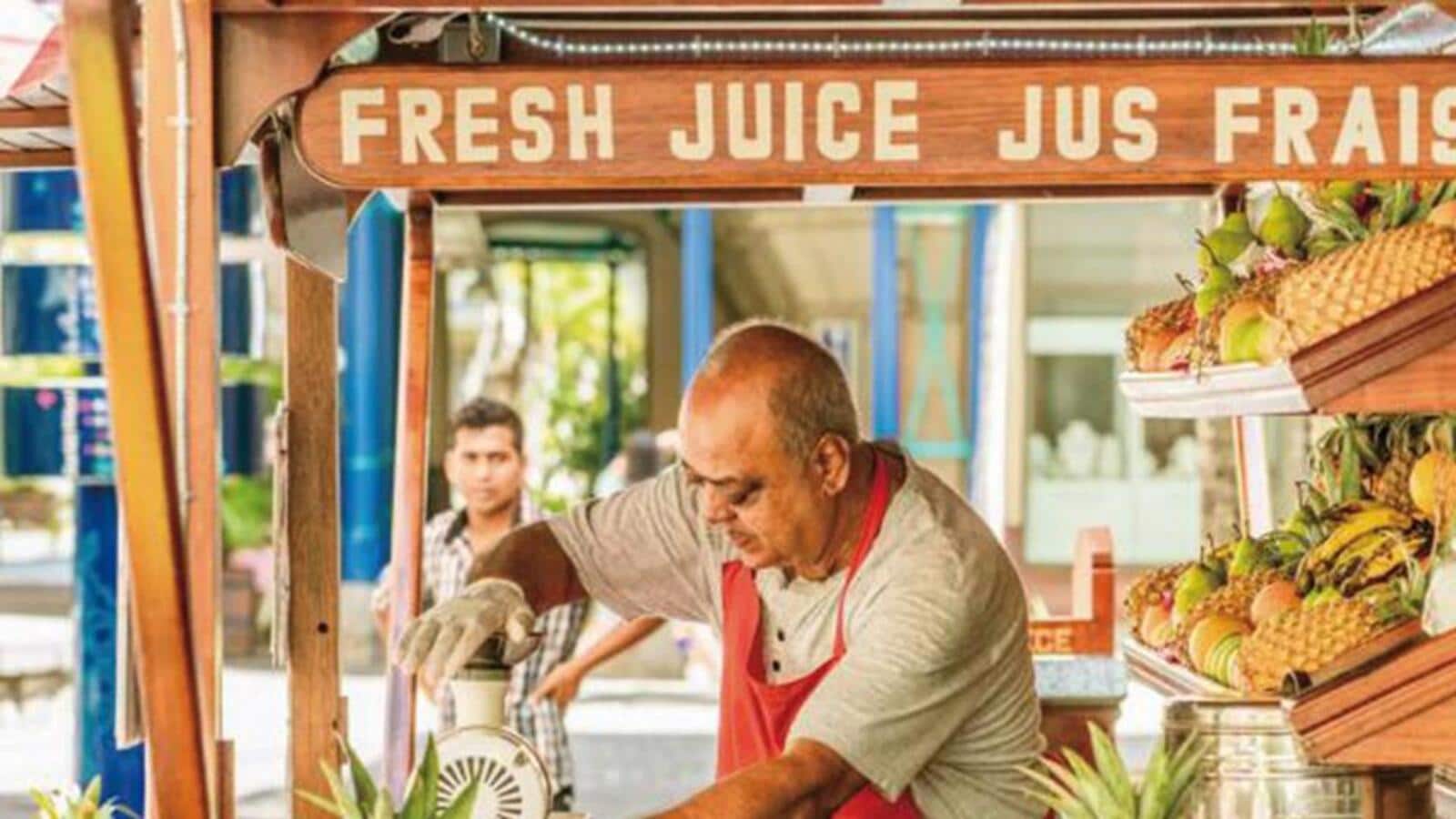 It is on Day 3 of my first trip to Mauritius—the 56th country I’ve visited—that I pass by a roadside food stall with a sign that says “Dholl Puri”.

“Is that a local version of the paani puri we get in India?” I ask my driver Hussain, who, like most Mauritians with roots in the Indian subcontinent, speaks English with a heavy French accent. (He also speaks a little Hindi that he has picked up from the Bollywood songs that play in his car non-stop!)

“Dholl-puri is the most popular savoury snack in Mauritius,” Hussain tells me. “It consists of a puri (flatbread) or farata (the Frenchified version of the Hindi word “paratha”) rolled up with a gravy made of veggies, broad beans etc. It’s delicious!”

Dholl, I later learn, is yet another Frenchified Hindi word for… don’t hold your breath… our humble dal!

Flash back in time

To my surprise, Mauritians of Indian origin are very different from the Indians in South Africa.

For one, they left India in the early 1800s, while those in South Africa arrived only a hundred years later. As a result of the time-lapse, few Mauritians with roots in India can trace their ancestors.

The little island in the Indian Ocean was part of the route that ships sailing towards the West Indies had to take to go around the Cape of Good Hope. The Suez Canal hadn’t opened yet.

Tamils came on French ships from Pondicherry, and a few years later, English vessels brought immigrants whose records say they boarded in Calcutta. Certain old families speak a smattering of Bhojpuri that has passed from generation to generation, which suggests their origins are possibly in and around Bihar.

A small population of Chinese migrants also arrived at that time. As amazing as it is to listen to Indian-looking people speak French-English and no Hindi, it’s equally beautiful to see Chinese people speak French Creole, which is a mix of French, English, some African languages, and… don’t hold your breath again… Hindi! In Port Louis, the China Town area is worth a visit for the food, the graffiti-filled walls and hidden Chinese temples.

Thankfully, all these “pravasis” or “migrants” are first class citizens in Mauritius, dominating politics, business and at the same time, continuing to hold on to the traditions their ancestors brought with them. A Pravasi Ghat museum exists in the centre of Port Louis, outlining their journeys, and a temple complex around Ganga Talao or Grand Bassin has some splendid statues of Lord Shiva and other Hindu Gods that will take your breath away.

People of Indian origin make up over 60 per cent of the population today, with Creoles and whites making up the rest. Bollywood is hugely popular as it is all over the world, but close ties with India make Indian politics quite the topic of discussion here as well.

Hinduism is the religion of choice for a majority of the people, and the customs seem to be visibly more rigorous than those practised in India today. On one morning as I leave for a scuba diving expedition in the beaches of Grand Baie in Northern Mauritius, I see dressed-up Indian couples performing a little puja on the beach. The husband ties a yellow thread around his wife’s neck, which is an annual renewal of vows. (“Gold came later, it’s the yellow thread that shows the bond,” a local Tamil lady tells me later. Does the man wear a thread to show he is married too, I ask. The answer is unfortunately, a no!)

She then tells me about the intense Tamil festival of Thaipusam, which involves fasting and piercing the tongue and other parts of the skin as a sign of gratitude to the Gods. “When I lived in Chennai, I was surprised to learn that it’s practised only by very few in India, mostly in the villages,” this 30-year-old marketing executive, who has lived in various parts of the world, tells me. “But we practice it here religiously… I do it. It’s my connect to my past, present and future.”

Amongst the Muslims with ancestors from the Indian subcontinent, the commonality whittles down to the dish that has everyone’s heart: Biryani! But in Mauritius, it is washed down by a peculiar sounding drink called “alouda”. I buy one for 20 Mauritian rupees at the main market and am surprised by two things: one, the currency notes carry the amount in Devnagari script as well, and two, the drink is nothing more than another Frenchified Hindi word for… falouda!

“I hope you’re staying in the north,” my well-travelled European friend had advised me as I planned this trip. “The water is better for swimming there than it is in the south.”

He was right. The south is where local Mauritians come to get away from the hustle and bustle over the weekends. It’s also the less populated part of the island, so large resorts dominate, as do tourist-led activities around nature parks.

The more discerning may want to head to the home of the only wine produced in the country. Uniquely, it uses lychees instead of grapes!

The west is where my heart is, for that’s where the locals hang out. Flic en Flaq is the most popular beach, and has large-sized malls alongside the roads leading there. I skipped those and picked haleem and a hard French loaf from a beach stall, instead!

Up north is “the English part of the island”, where temperatures are a bit more temperate, and the fancier gated residence complexes exist. Grand Baie is a touristy area with the most popular hotels. A few big international chains dot the east coast as well.

The terrain of Mauritius is hilly in the centre, and the winding roads may take you longer to get from one point to another than you may account for. But driving is a charming way to explore the mini-country, and there’s a beauty in being guided by the differently-shaped mountain heads you begin to recognise just a few days after being there.

The airport is in the south-east, where Blue Bay has the most pristine waters for boating and day trips to islands off the shore. But the thing to do in this area is to walk around the quaint town of Mahebourg, which offers glimpses into the French and Dutch colonial past.

I sign off my time in this area with a local meal at a colourful military man-turned-restaurateur’s eatery called Karai Mario. “Thanks for the meal and your stories, Mr Mario,” I say before leaving. “Or, should I call you Mr Karai?”

Mario laughs. Karai is not his name. It is a Frenchified version of the Hindi word, “kadhai”!

Mauritius has more to offer in terms of culture and history than the other island destinations in the Indian Ocean. For Indians, these discoveries can be profound and thought-provoking.

If you’re still the part of the group that goes for “hotel tourism”, this island may fall just short of the more newly developed properties in the Maldives and the Seychelles. But if you go looking for the beauty of the people, the similarities in our culture, traditions, foods and everyday habits, you will easily forget the blue seas and beautiful beaches that surround the country.

I look at my French-speaking Tamilian guide (now friend) and see a reflection of and love for India. Mauritius may be the 56th country I’ve visited, but seeing the faces around me, I wonder if I should call this a country that’s distinct from the one I call home.

Three hotels in Mauritius to stay at:

“Sir, this is the very room Bollywood director Zoya Akhtar lived in a few weeks ago,” the bell boy tells me as he deposits my bags in this American-sized XL resort in the southern part of Mauritius island.

Vinesh Lochun, a Mauritian of Indian heritage, who shows me around the property later that afternoon, is more detailed. Multiple pools, including adult-only ones for those who want to stay away from families, fine-dining, a fully loaded spa and immaculate sunsets is what this self-contained hotel is made of.

The Plantation Club, a more recent addition to the resort, consists of a dining area, a porch and a pool. It allows access to more premium guests for breakfast and high tea, and for dinner for those who make reservations in advance. In a resort this sized, it’s a great place to escape in order to get away from the crowds.

Most of all, this family-style resort that’s well suited to Indian guests as well, is great for weddings and offers countless “Instagrammable spots” that’d make for pictures to remember. But that’s not something Zoya Akhtar was scouting for, we reckon…

The biggest advantage of Sugar Beach resort is that it is situated on the beach area of Mauritius that’s most popular with Mauritians themselves: Flic en Flac. As a result, you can walk from the hotel beach to the local public parts easily, access food stalls and get a taste of the Mauritian lifestyle.

Also a part of the hotel property is the first ever luxury resort in Mauritius called La Pirogue, also owned by the Sun Group of Hotels. Well-off Mauritians will tell you how they came swimming to the hotel as kids in the 1990’s. Newly renovated, some of the rooms of La Pirogue seem more modern than those at Sugar Beach; only, the property can’t call itself five-star because the size of the guest rooms is a bit smaller than what norms require.

All in all, a great complex for those who want a taste of the Western beaches of Mauritius, and a bit of self-conducted sightseeing as well.

The newest hotel in Mauritius is a luxurious ultra-modern 100-odd room property that was constructed ground up after tearing down an older hotel. It is also situated in the Northern part of Mauritius, which is known to be the most exclusive, with tons of water sporting activities and great beaches for swimming.

The rooms are spacious and modern with fantastic views of the sea (and the setting sun every evening.) The clean straight lines of the design by British designer Kelly Hoppen have the potential to look industrial and cold, but offset with warm furniture, books to read and soft deign touches, the hotel feels as welcoming as home.

Most visitors may find the rooftop to be the jewel in the crown, with its infinity pool, private coves and an Instagram-friendly swing that everyone posts on social media.

But the real winner for Lux Grand Baie is its Japanese diner and bar, Ai Kisu. If it maintains consistency, this could well be the first internationally celebrated restaurant in Mauritius.