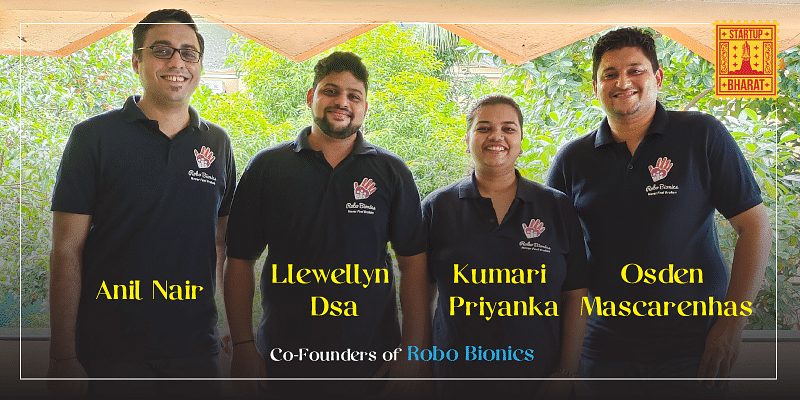 While at IIT Patna during his MTech days in 2014, Llewellyn Dsa (now 30) met his batchmate Jayant Vyas, who did not have a limb since birth.

Curious as a robotics student, he found out that Jayant had tried a couple of artificial limbs in the past. However, they were developed more for an amputee rather than a congenital disorder, making them heavy to use for long durations.

This left Llewellyn unsettled and pushed him to research ways to develop an artificial hand, which translated into ﻿Robo Bionics﻿.

Started in December 2016 by Llewellyn, Kumari Priyanka, Anil Nair, and Osden Mascarenhas, Mumbai-based Robo Bionics has developed an affordable artificial hand that can touch and feel.

Grippy, the artificial arm created by the startup, costs between Rs 2.5 lakh and Rs 3.25 lakh, which the founders claim is much lower than the available bionic arms in the market that starts from Rs 8 lakh.

Grippy is a patent-pending, 3D-printed prosthetic hand. It is NABL Lab Safety tested and certified and stands out for having a sense of touch and multi-grip control.

Osden says there are two types of arms available in the market:

Myoelectric — the metallic arm has three fingers but does not give the feel or look of a real arm — and Bionics, which works as an actual arm but is expensive. The cheaper ones, Osden adds, are for vanity and do not help the person with a missing limb.

The co-founders claim that Robo Bionics’s arm is created with must-have functions to navigate daily chores, such as opening and closing a bottle cap, driving a car with both hands, holding a newspaper, holding a handle, etc.

“We strive to improve and deliver robotic and bionic solutions to enhance the quality of human lives. Any circumstances must never break the human spirit, and through our technology and innovation, we are empowering human nature to ‘never feel broken’,” says Anil.

The startup is recognised by the Startup India Initiative by the DPIIT, Government of India.

Since 2016, Robo Bionics is working on Grippy. In February this year, it finally launched the bionic hand in the market and has manufactured 50 units so far. In the next 12-18 months, the startup wants to manufacture and sell 150-200 units in partnership with 15 partners across India.

As part of his research, Llewellyn, along with his batchmate Kumari Priyanka at IIT Patna, the duo had created a prototype. They were later joined by their college friends Anil and Osden.

“The prototype was bulky, but it was functional and had positive testing and execution on Jayant,” Llewellyn says.

At the time, the startup was part of the Incubation Centre at IIT Patna (IC IITP), under the guidance of KC Ray, Prashant Jha, Joseph Paul Aracklan, and Aditya Natarajan.

In fact, Robo Bionics was also a part of AIT 2016, organised by the SINE (IIT Bombay) and the Indian and Swiss governments. It soon received its first grant from BIRAC IIPME to establish its proof of concept, named Grippy.

After many iterations, a final version of Grippy was sent for full compliance testing as per internationally accepted standards for General and Electrical Safety at a NABL Accredited Lab, and the artificial hand was launched in February this year.

According to Robo Bionics, the primary reason for individuals to rejecting the available prostheses are complexity, extended learning time, no bio-feedback, and finally, affordability and accessibility. Some players in this space include Makers Hive, Kal Bionics, Zeus, Ottobock, and Inali Foundation — to name a few.

“Our device is developed from the ground up with our sensors and sensor fusion technology to ensure no incorrect opening of the hand. Secondly, a sense of touch enables the user to feel the opening, closing,  soft, and hard object grips without any additional surgery or extensive reliance on vision or intuition. Thirdly, the user can learn to use the device within a few minutes of training,” Llewellyn explains.

He adds that Grippy weighs half the weight of traditional prostheses at 700 grams, and the device is non-invasive, ensuring easy interfacing.

“Sense of touch can shorten the training period of our device, and amputees can touch and feel the object they are holding,” he adds.

“There are an estimated 16.2 lakhs of hand amputees in India, and globally, there are about 50 lakhs hand amputees, with only 4 percent having access to prosthetics. As most amputation cases are below the elbow (around 60 percent), we designed Grippy keeping them in mind,” Osden explains.

He adds that around 23,500 people lose their upper limbs every year, and about 85 percent are still without any solution.

In fact, the startup — after completing the compliances required in the US and Europe — will launch Grippy in these markets.

“We have also partnered with ecommerce platforms like Medikabazaar, DrStore, and Medpick for online distribution. We are in advanced discussions with two government bodies in Mumbai and Andhra Pradesh for pilot implementation,” Anil adds.

The company is in the early stages of revenue. Osden adds that while it is a for-profit organisation, the focus is not on making money, but to help people with missing limbs.

Robo Bionics has raised funding to the tune of Rs 1.2 crore through various awards and grants from noteworthy institutions, like BIRAC, SINE, and IC IITP, etc. It is now looking to raise funding between Rs 3.5-4 crore to scale its distribution and expand internationally.

Llewellyn says the startup is working on several other variations of Grippy for specialised purposes. It is in the process of setting up multiple assembly stations across India to make servicing accessible.

“Finally, the end goal is to have affordable but dextrous prosthetics accessible to anyone, anywhere,” he adds.