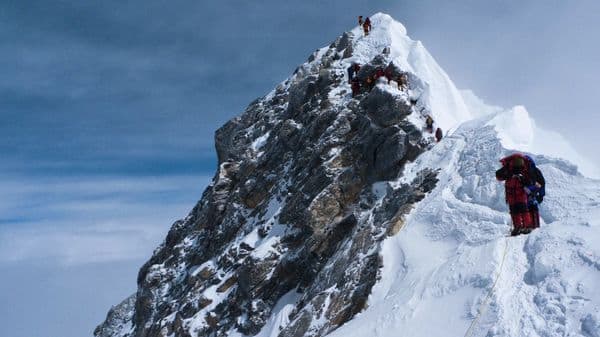 He attended a high-altitude climbing course, upped his training and within a year was peak bagging mountains around the world. By age 67, he had climbed the highest mountain on every continent, including Mount Everest twice. Today, he is one of the most respected mountaineers in the world and even has a peak near the Nepal-Tibet border named for him.

Mr. Burke’s ascent to the top of the sport came with many failed attempts, including four on Everest and four on the peak named for him, Burke-Khang.

“When the summit is within sight and you decide to turn back, that’s channeling strength, not weakness,” the 79-year-old says. “I need to think of my family, who have been very supportive along this journey.”

While Mr. Burke has no plans to temper his extreme pursuits, he has had to adjust his training. It isn’t easy for a self-described Type-A personality to dial back the difficulty of anything, he jokes. Five years ago, he realized he was attempting exercises suitable for someone half his age, like bench pressing 100 pounds. He has since decreased the amount of weight and increased the repetitions. And instead of running on the treadmill he walks on a steep incline.

“I now leave the gym sore rather than in pain,” he says.

“My Everest attempts worried her,” he admits.

In 2019, he completed a 120-day, solo canoe trip, paddling 2,300 miles of the Mississippi River. When the coronavirus pandemic derailed his plans to walk the 400-plus mile Camino Frances route of the Camino de Santiago in Spain, he continued walking around his home in Costa Mesa, Calif. His walks became daily explorations spanning 15 miles a day.

He plans to walk the trail unsupported next fall, estimating it will take him five weeks. He has also been training for a solo canoe trip of 2,000-plus miles retracing the Lewis and Clark expedition in reverse on the Missouri River.

“Goals keep me motivated and excited,” he says. “Getting older doesn’t mean we have to stop living. We just have to train harder.”

Mr. Burke works out six days a week and always starts his morning with 10 minutes of stretching focused on his lower back. His gym membership at 24 Hour Fitness is covered by the Medicare senior-fitness program SilverSneakers. He spends two hours there Mondays, Wednesdays and Fridays doing a mix of weights and cardio.

Mr. Burke warms up with 30 minutes of cardio, alternating using the treadmill, stair machine, elliptical, stationary bike and rowing machine. He rotates between four different strength routines depending on the adventure he is training for. Each has four exercises, such as leg curls and lat pulldowns that he performs for three sets of 20 reps. He jumps rope 70 times between exercises.

On Tuesdays and Thursdays, he goes for brisk walks averaging 7 miles and stops midway for lunch. If he is preparing for an alpine mountain climb, he’ll add in a hike in the local mountains. Sundays are devoted to biking with his grandson, Oliver Dillon, age 21, who has a developmental disability. Mr. Burke rides an e-bikes and pulls Mr. Dillon, who weighs 85 pounds, behind him on a trailer using a pedal assist feature for the uphills.

“He loves the motion and the mountains and it’s a great workout for me,” he says. “Ollie climbs Mount Everest every single day of his life. He motivates me.”

Rides typically last four hours and cover 35 miles, though occasionally span 50 miles. Favorites include cycling from Newport Beach to Oceanside along the Pacific Coast Highway and then taking the train home. They always stop for lunch and sometimes a walk on the beach.

Caffeine Fix: “I have a cup of coffee with a lot of cream and sugar every morning,” he says.

Lunch: Protein shake or a salad

Dinner: “My wife is a fantastic cook,” he says. “Hard shell ground beef tacos with all the fixings is a favorite meal.”

Secret sauce: “I’m a hot sauce freak,” says Mr. Burke. “I put it on everything from fish to soup.” Ghost pepper is his favorite.

Splurge: Dinner out at an Italian restaurant and a glass of Silver Oak Cabernet.

• Vasque Breeze WT GTX hiking boots ($200) give him the least problems with blisters, he says.

Strength Training as We Age

Generally, young adults focus on aerobic and resistance exercises. As we get older, we need to adapt our workouts, says Michael Rogers, director of the Center for Physical Activity and Aging at Wichita State University.

“Muscle-strengthening activity becomes particularly important in preventing age-related loss of muscle mass and bone,” says Dr. Rogers. “Many people start to experience a loss of balance in their 40s or 50s so this is really the best time to start incorporating balance exercises that can help prevent falls and other mobility problems.”

Alynn Dukart, a wellness physical therapist at the Mayo Clinic in Rochester, Minn., says that strength exercises such as squats and lunges should be performed with a weight that feels challenging and with proper technique.

“While it’s important to not overdo it, it’s equally important to find the right exercises, weight and intensity that will result in strength gains,” she says. “Without an optimal challenge, your body won’t adapt and you won’t see that much benefit.”

She suggests working with an exercise specialist who can evaluate your strength, mobility, flexibility, balance and medical issues to build a tailored plan.