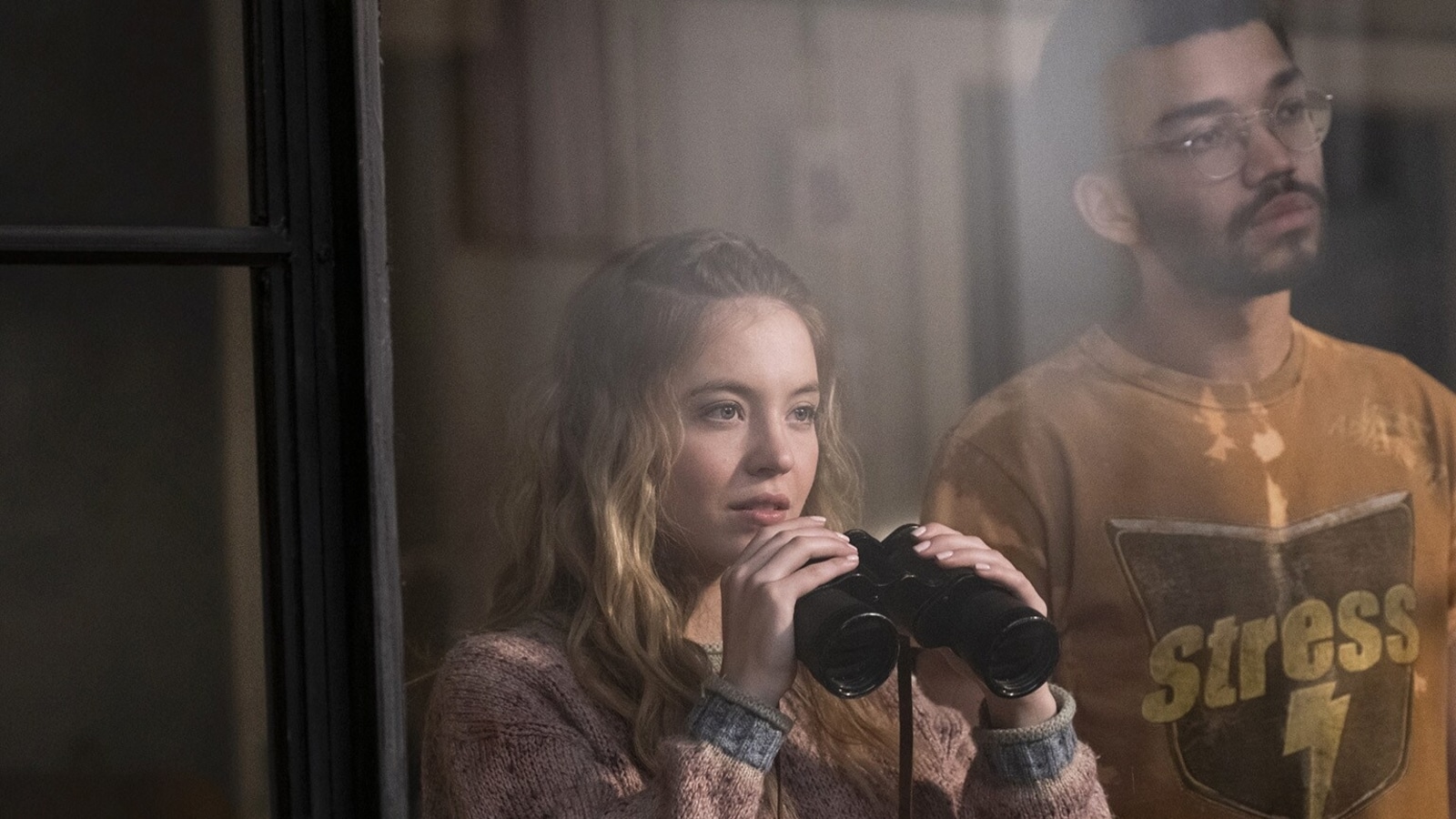 After watching the opening moments of the film, in which the credits play out over shots of irises (get it?) and a sultry Sydney Sweeney walking along the street with synth music blaring in the background, you might wonder if you’ve mistakenly switched on an episode of Euphoria. The film certainly milks her newfound status as the sex symbol for kids who spend after-school hours twerking on Reels. But with no idea what to do with Sweeney’s magnificently mysterious aura, The Voyeurs builds to a final stretch in which it basically corners her into removing her clothes.

Two 20-somethings named Pippa and Thomas, played by Sweeney and Justice Smith, move into a spectacular studio apartment in an undefined European city, and are almost immediately drawn to the fancy couple who live across the street from them. Neither Pippa and Thomas nor their next-door neighbours, whom they give made-up names, look old enough to vote. So how they’re able to afford such swanky accommodation at their age is beyond me. Maybe they’re meant to be older than they seem? Who knows, but I was unable to shake the feeling that I’m watching one of those Flipkart ads in which kids playing uncles and aunties.

Even before they’ve had their first meal in the new house, Pippa and Thomas find themselves spying on the couple next door. Things only get weirder when Pippa realises that she gets off on it, and Thomas conveniently remembers that he has the necessary technical skills to eavesdrop on the neighbours’ conversations by creating a gizmo that shoots invisible beams across the street or whatever.

While Pippa and Thomas’ dubious hobby intensifies every night, writer-director Michael Mohan straight-up refuses to scratch beneath the surface of the moral implications of their actions. Sure, we’re curious about the neighbours’ lives as well; the dude seems to be cheating on his wife, and she appears to be clueless. But after a point, any sane viewer would throw up their hands and declare that Pippa and Thomas are crossing the line. And sure enough, it begins to impact their relationship.

There are many ways that rational human beings in Pippa and Thomas’ situation could behave, but even with a pair of binoculars in your hands, you won’t find any sign of level-headedness in The Voyeurs. The problems with the movie are easy to identify — the protagonists are creeps, the people they’re spying on are uninteresting; so there’s no way that you’re going to care for either of them. But despite its rather childish handling of important ideas, the film is quite risqué in its final moments. It’s all superficial, though.

As strange as Pippa’s motivations may be, at least they’re established. However, it isn’t immediately clear as to why Thomas continues humouring her. He begins having second thoughts about their nightly spying sessions, and eventually has such a sudden overreaction to an activity that he was happily participating in moments ago, that you wonder if he’s secretly a psycho.

As it turns out, there are several psychos in The Voyeurs, but Thomas isn’t one of them. Then again, this depends entirely on your definition of what a psycho is, because when it comes to such distinctions, the movie is clearly on another planet altogether. In fact, it unravels so breathtakingly in its final moments — by both moral and narrative standards — that you wonder in despair at what someone with Paul Verhoeven’s satirical eye could’ve found in this story.