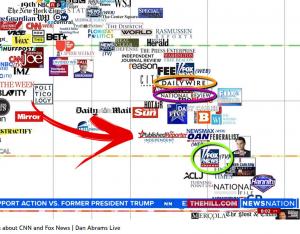 In an age of thriving misinformation, we work hard to ensure readers of The Published Reporter® are provided with true and factually accurate information.”

For instance, in January 2022, the Colorado-based watchdog determined that material published by The Published Reporter skews “Right of Center” and is “Opinion Based” or has a “High Variation of Reliability,” assigning it an overall score of 11.70 for “Bias” and 27.00 for “Reliability” respectively.

For the chart, zero is considered no bias while the higher the reliability rating, the more reliable a publication is perceived to be. A sampling of data, all of which is publicly available on the group’s website via static and licensable interactive charts, places The Published Reporter above several major news and media companies.

Media companies deemed to have both more bias, while being less reliable were:

Media companies deemed to have more bias, yet considered more reliable were:

The groups Media Bias Chart® is used to rate thousands of news and media publishers from podcasts to television news, to internet sites.

“I think the rating is fair and as Publisher, I’m comfortable being included in a list along side many news and media sources I personally watch, read and/or listen to on a daily to weekly basis” said Chief Executive Officer, John Colascione. “In an age of thriving misinformation, we do work hard to ensure readers of The Published Reporter® are provided with true and factually accurate information. Our opinion content is also well labled and differentiated from our news reporting.”

For more on how the public benefit corporation gathers its ratings watch Dan Abrams Live on NewsNation where the television news journalist covers “What the media bias chart reveals about CNN and Fox News: https://www.youtube.com/watch?v=K2ddh0S_yXA

About The Published Reporter®

The Published Reporter® is a news and media outlet which focuses primarily on news and current issues related to the United States with a local focus on South Florida. In November 2020, the online newspaper announced it had reached a significant milestone; inclusion in Feedspot’s coveted “Top 100 USA News Websites” list, putting the independent Published Reporter website shoulder-to-shoulder with some of the heavy-hitters in the media world in terms of traffic, recognition and quality. It remains an advocate against the lame stream media and focuses on Truth and America First™.