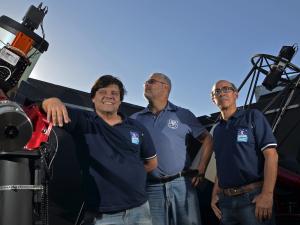 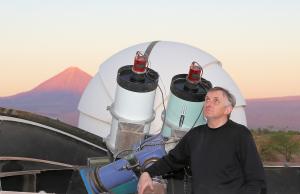 Alain Maury of the MAP survey in Chile, posing with their telescope. Maury works in collaboration with with Georges Attard in France and Daniel Parrot in the USA. Image: Alain Maury

The money will be used to bolster the asteroid hunters’ efforts to find, track, and characterize near-Earth asteroids.

Characterization: To both understand specific asteroids in case we need to deflect them, and to more broadly understand the asteroid population, asteroids need to be characterized to define attributes like spin rate, composition, physical properties, and even whether what at first appears to be one asteroid is actually two: a binary pair. Asteroids are highly variable, including in ways that could affect missions to deflect or disrupt an Earth-threatening asteroid.

Tracking: Once an asteroid is found, how do we know if it is going to hit the Earth? We need to track it with lots of telescopic observations over days, months, and years, each of which helps us refine the predicted orbit of the asteroid. Without sufficient observations, sometimes needed quickly after discovery, asteroids can even be lost.

Discovery: Currently most professional NEO surveys that discover asteroids are in the northern hemisphere. The amateur asteroid hunting community fills a need for discovery as well as follow up tracking in the southern hemisphere.

This year’s Shoemaker grant winners continue a long tradition of planetary defense programming made possible by the donations of Planetary Society members, who are primarily everyday space enthusiasts from around the world. This year The Planetary Society was able to award more amateur asteroid hunters more money than ever before: $74,375. The eight grant winners are from seven countries on three continents. Over the 24-year history of the program, approximately $515,000 has been granted to 70 winners in 21 countries on six continents. Here are summaries of the newest winners:

Vladimir Benishek of Sopot Astronomical Observatory in Serbia is awarded $9,500 to purchase a 61-centimeter (24-inch) mirror optical set to use in a new telescope he is constructing that will allow observations of fainter asteroids. The system will be used primarily for asteroid characterization studies, specifically photometry (brightness) measurements used to determine light curves (brightness with time) that facilitate the determination of spin rates and discovery of binary asteroids: where there are two asteroids rather than just one. As part of a consortium of observers, Benishek has discovered the binary nature of many tens of asteroids. Benishek was a 2017 Shoemaker NEO Grant winner.

Fabrizio Bernardi and Maura Tombelli of Gr.A.M. (Gruppo Astrofili Montelupo) at the Beppe Forti Observatory in Italy are awarded $13,000 for a new camera with larger CCD detector that will provide a much larger field of view (40 x 40 arcminutes). That will enable detection of fainter NEOs by using longer observations while still keeping the moving asteroid within the field of view. The 65-member Gr.A.M (Montelupo’s group of amateur astronomers) operates the Beppi Forti Observatory. They focus on follow-up astrometry (sky position measurements) of recently discovered asteroids to determine orbits.

Massimo Calabresi, Roberto Haver, and Raniero Albanesi of Associazione Romana Astrofili in Italy are awarded $7,329 for a replacement more sensitive camera and new filters. The camera will increase their sensitivity to reach V = 21-21.5 magnitudes which will facilitate follow up tracking observations of more NEOs just after discovery by the large professional surveys. The filters will improve their observations.

Gary Hug, David Cromer, Doug Goodin, and Russell Valentine of the Northeast Kansas Amateur Astronomers League, Inc at Farpoint Observatory in Kansas in the United States is awarded $11,591 to replace a 10+ year old camera on their 0.7-meter telescope with a new technology CMOS camera which, with associated filters will allow them to improve and increase follow-up of faint NEOs and asteroid characterization. This will complement their replacement 0.7 meter mirror that will have a larger field of view. They were Shoemaker Grant winners in 2018.

Cristóvão Jacques, João Ribeiro, and Eduardo Pimentel of SONEAR (Southern Observatory for Near Earth Asteroids Research) Observatory in Brazil are awarded $9,195 for a new camera and a video card. The camera will improve sensitivity from 20.5 to 21.5 magnitudes. The video card will speed up software used to more efficiently track recently discovered asteroids whose orbits are not well known. Their southern hemisphere location includes coverage of southern sky not well covered by professional surveys and lacking in other observatories. They have discovered a very impressive 35 NEOs. Jacques was awarded a 2000 Shoemaker Grant while at a different observatory.

Korado Korlevic of Višnjan Observatory of Croatia is awarded $12,000 for a new more-sensitive CMOS camera improving sensitivity and download efficiency for their 1 meter diameter telescope. The observatory focuses on follow-up astrometric measurements of newly discovered NEOs. Korlevic was awarded a 2019 Shoemaker NEO Grant to recoat their mirror, and to purchase a new coma corrector. In 2020, they were third-ranked in the world in NEO discovery confirmations. The observatory also has educational visits by middle and high school students.

Florent Losse in France is awarded $3,760 to replace a camera and for a new secondary mirror to work with the new camera. Field of view will increase by threefold allowing better astrometry, photometry, and easier follow-up of fast moving objects. Better sensitivity will allow imaging of dimmer objects (to V=21.5). Prior to the camera failing, Losse was one of the top 10 observers in the world in number of NEO observations per year.

The proposals were reviewed by the following expert advisory panel: