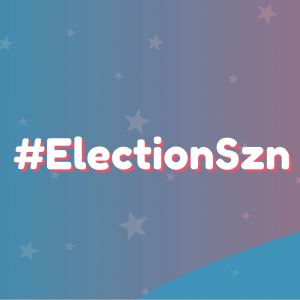 LGBTQ+ youth-focused nonprofit seeks to educate young voters with resources through partnerships with voting orgs including Rock the Vote and DoSomething.

LOS ANGELES, CA, UNITED STATES, September 20, 2022 /EINPresswire.com/ — On National Voter Registration Day today, the It Gets Better Project is announcing the release of the new digital content series #ElectionSzn which aims to educate and offer voting resources for young LGBTQ+ young people. As the world’s largest storytelling effort to uplift LGBTQ+ youth, the non-profit has produced a series of short videos which premiered on September 12 and will be released weekly through Election Day 2022 (November 8).

With an estimated 8.3 million eligible new voters who have turned 18 since the 2020 general election, the purpose of #ElectionSzn is to encourage eligible LGBTQ+ young people to register to vote and inform young future voters about the process of voting. These bite-sized videos will highlight a diverse cast of young LGBTQ+ content creators and activists sharing the reasons they are voting and the issues that matter most to them this election cycle.

To further amplify #ElectionSzn and provide election resources and information to young voters, the It Gets Better Project is collaborating with a number of voting and youth-focused organizations, including Rock the Vote, DoSomething and GLSEN. The series will be promoted on the It Gets Better Project’s TikTok and Instagram channels and at www.itgetsbetter.org/blog/electionszn/. The series is also accompanied by an effort to register new voters. Eligible voters can now register at itgetsbetter.org.

“LGBTQ+ youth care deeply about a wide range of issues facing this country, and we want to equip them with resources and information that can help them get involved in the process,” said Ross von Metzke, Director of Communications and PR for the It Gets Better Project. “Whether it’s registering to vote, getting out to the polls or, for LGBTQ+ people who are not yet 18, identifying other ways they can get involved, we are deeply grateful to the organizations that are working with us to educate and empower LGBTQ+ youth ahead of the midterm election.”

Voting is important to me because my voice plays a role in selecting my representatives at all levels of government,” said Rowen Elsmore, who streams on Twitch as ms_huffle and contributed to the campaign. “So much of our society can be better than it is now, regardless of a person’s identity. Voting is the small thing I can do to play my part in making that happen.”

Further information about #ElectionSzn and the It Gets Better Project’s work is available at www.itgetsbetter.org.

The It Gets Better Project received the 2012 Governor’s Award from the Academy of Television Arts and Sciences and has been highlighted in a wide range of films and television programs, including a Saturday Night Live sketch in February, 2021. The project has garnered support from President Joe Biden, former President Barack Obama, and former Secretary of State Hillary Clinton, along with numerous celebrities, including Kelly Clarkson, Gabrielle Union, Zachary Quinto, Mj Rodriguez, Josie Totah, and Gigi Gorgeous. More than 760,000 people have taken the It Gets Better pledge to share messages of hope and to speak up against intolerance.

Ross von Metzke
It Gets Better Project
+1 323-782-4934
email us here
Visit us on social media:
Facebook
Twitter
LinkedIn
Other