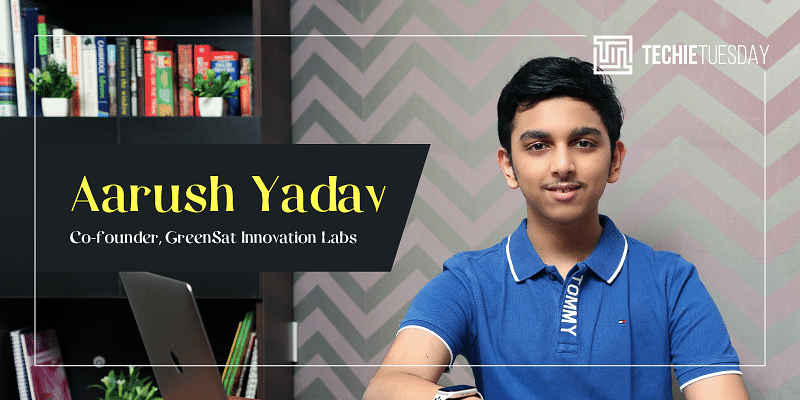 Aarush Yadav had just begun learning AI when the first COVID-19 pandemic-induced lockdown was declared last year. Like the rest of the world, his eyes were trained on the news. By August though, the news cycles started focusing on farmers from the length and breadth of India marching to Delhi to protest the Farm Bill — and Aarush, like the rest of us, saw that too.

As with most families, dinner table discussions around the farmer protests ensued, and after one such conversation with his father, the 15-year-old tech enthusiast started wondering if there was anything he could do to help them, and the agricultural sector in the country, in general.

His instructions in AI gave him an idea and GreenSat Innovation Labs, the tech entrepreneur’s first formal startup, was born.

GreenSat is an agritech company that uses satellite imagery and AI/ML to assess farmlands and provide AI-driven insights on the state of the land, including identifying pest issues, as well as other potential threats to crop growth and production.

Aarush says the startup is also building an agri-finance stack on top of the farmland assessment feature, which will enable farmers to apply for loans easily, and purchase insurance for their crops, among other things.

“Our mission is to help as many farmers as we can by ensuring they’re able to get ahead of any problems that could cause crop failure,” Aarush tells YourStory.

The startup, which offers its satellite imagery-based assessment reports and insights free of cost to farmers via WhatsApp, has around 10,000 farmers onboard, across Gujarat, Maharashtra, Madhya Pradesh, and Rajasthan.

Aarush says that although he is not immediately focused on revenue generation, he hopes that when banks see the value GreenSat brings to farmers, especially when it comes to repaying loans after a good crop sale, they will pay the startup and help spread the word to their farmer-clients too.

His co-founders include Deepak Yadav, his father; Krishna Kumar Ghosh, who manages finance and strategy for the startup; Jash Sheth, who, along with Aarush, is the technical co-founder; and Ankesh Toshniwal, who manages marketing and operations for GreenSat Innovations.

Aarush has built the app’s backend server-side code, including the database that powers image processing. He has been adding new features and functionalities to the app, as well as AI solutions to better the interface’s image processing capabilities.

The bootstrapped startup is financed by Deepak, who is a core member of the team.

GreenSat isn’t Aarush’s first entrepreneurial venture. When he was in the sixth grade, he, along with his father, created a digital recycled water trading platform, which ran successful pilots in multiple states in India. The initiative is aimed at bridging the gap between sources of reclaimed water and end-users in a bid to save fresh water and help municipal corporations generate additional revenue.

After GreenSat was launched, the young entrepreneur decided to integrate the recycled water platform into his new startup.

“Technology is transformative, and can truly change the world,” he says, adding that one of the reasons he gravitated towards the tech world when he was younger was because he wanted to harness the good it could do humanity.

Even at GreenSat, affecting the lives of farmers in a positive way is at the heart of Aarush and his co-founders’ mission.

“Tech has put the everyday man in space, and it can do so much more. It can support the collective human endeavour to become better and live better lives,” he quips.

And Aarush says he wants to embody that belief even in the future by way of social entrepreneurship.

“I appreciate the freedom entrepreneurship gives one, and I do hope to continue taking GreenSat to new heights,” he says.

His heroes in the tech world include Tesla’s Elon Musk and Bill Gates, and their early struggles in their lives, in particular, inspire him to do more, he adds.

Aarush first fell in love with tech when he was in Class 4. His school has just started signing students up for coding classes, and Aarush, along with his friends, decided to enrol.

The first few projects he made captured the then 12-year-old’s imagination, even though they were extremely basic and beginner-level feats.

“The 2D shooting games I worked on back then helped me realise that I love creating things and making stuff from scratch. My friends and family encouraged me greatly to continue coding and stay the path I was on,” Aarush says.

These days, besides honing his coding skills, and learning newer technologies such as AI/ML, blockchain technology is something Aarush is excited to explore.

He also believes that data science is going to play a huge role in the coming days, considering how much data is processed around the world, every single second.

For himself though, he envisions a future in software engineering, which he believes will help him follow his passion for building for India. His problem-solving approach hinges on talking to people, on the ground, who are directly affected by those issues, and trying to understand how he can best present actionable solutions.

The student-entrepreneur is currently shuffling online classes with GreenSat, and says his work desk has one laptop set up for his classes, and the other, for work. When he doesn’t find the time to work during the day when classes are ongoing, he can often be found burning the midnight oil.

“I’m passionate about technology, and this gives me the drive to find a balance (between work and studies). I have also made myself a timetable that helps me keep a schedule and organise my time efficiently, and devote sufficient time for every activity,” he says.

Along with his school friends, Aarush is also working on creating an on-demand app to help IGCSE students prepare for their board exams, which they will roll out soon.