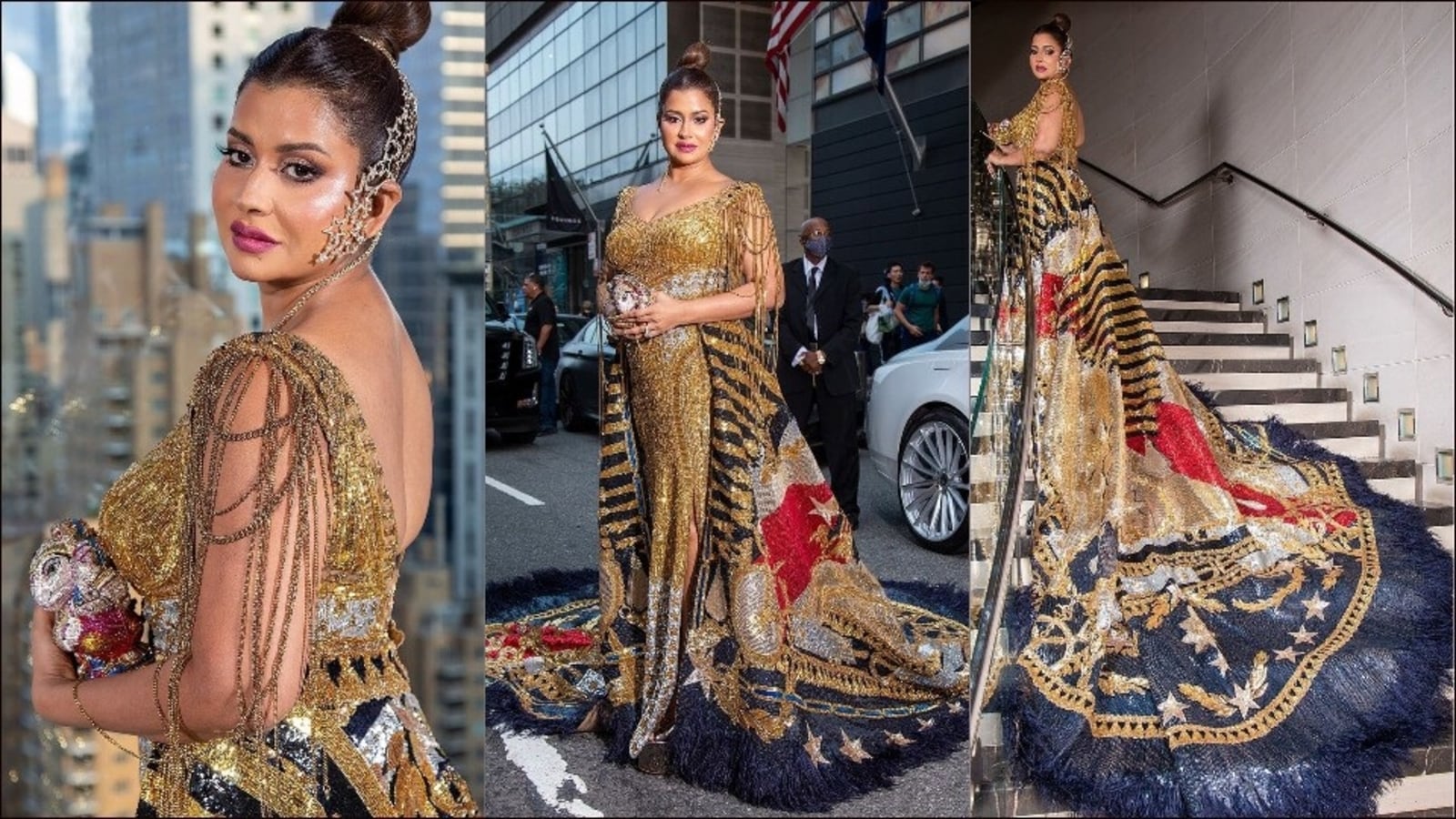 Hyderabad-based philanthropist Sudha Reddy represented India at Met Gala 2021 and made her red carpet debut in a Falguni Shane Peacock gown that was inspired by the colours of the American flag, to reflect this year’s theme – ‘American Independence.’ Though the guests at fashion’s biggest night didn’t have to wear a piece from a homegrown label, they paid tribute to the ingenuity of American style which is a mix of gusty, adventurous sartorial spirit and Sudha’s wardrobe choice did exactly that.

Calling it a “masterpiece of Indian craftsmanship”, Sudha took to her social media handle to give fans and fashion enthusiasts a glimpse of the Falguni and Shane Peacock ensemble. Reportedly the Director of Megha Engineering and Infrastructure Limited, Sudha is the wife of billionaire Megha Krishna Reddy and was the only Indian at Met Gala 2021.

Her opulent military-inspired haute couture by the ace Indian designers featured a bright gold sculptured gown that came with a dramatic 4-meter metallic train and sported colours of the American flag. Styled by Ise White, Sudha’s gown grabbed the limelight for its 3D embellishments of Swarovski crystals, sequins and bugle beads adorned on the sartorial train.

Completing her attire with a pair of sequined gold stilettos from Chanel, Sudha accessorised her look with a glitzy Ganesha clutch by Judith Leiber. She pulled back her tresses into a top knot to flaunt a pair of Farah Khan Ali’s ornate diamond ear cuffs and let her regal ensemble do the maximum talking.

Known to be a connoisseur of art and fashion who claims to like shopping from the streets of Hyderabad to high-end luxury designers, Sudha was not new to such global events. She has often interacted with a plethora of world’s prominent celebrities for her work on children’s health, breast cancer awareness and largely as a businesswoman, entrepreneur, founder, philanthropist and homemaker.

“The Met Gala has been one of the most aspirational landmark events in the world of style, one that is keenly admired by fashion greats. Monday evening’s intimate gathering was special and memorable,” Sudha shared in a red carpet interview. She added about her experience, “It was an extremely rewarding outing for me as I was able to exchange notes with many notable personalities, some of who are extremely keen to explore socio-economic welfare campaigns in association with the Sudha Reddy Foundation in the future. I am extremely humbled and honoured to have received this opportunity to represent my country at this eclectic fashion parade.”

Share
Facebook
Twitter
WhatsApp
Previous articleCan Alexa and Siri make your kids bossier? You may like the results though | Gadgets News
Next articleHow will UX with tech integration across industries help during COVID-19
RELATED ARTICLES
Lifestyle