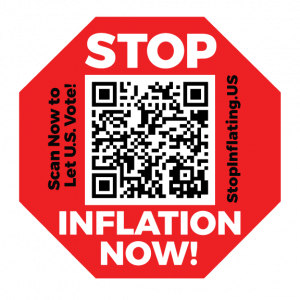 If Congress fails to act, then the States can and should lead. If we don’t put our federal finances in order, our economic and national security, and domestic tranquility will suffer over time.”

DAYTONA BEACH, FLORIDA, USA, July 29, 2022 /EINPresswire.com/ — A coalition of nonpartisan advocates concerned about the impacts of inflation and out-of-control national debt are encouraging state legislators from around the country to support a state-drafted, voter-approved, inflation-fighting, fiscal responsibility amendment to the Constitution.

At an event this week, state legislators are being urged to advocate for the recently introduced House Concurrent Resolution 101 which calls for an Article V Convention of States to propose Amendments to the United States Constitution and stipulates ratification by state conventions, effectively a vote of the people.

At the meeting, the Stop Inflating U.S. team is displaying a life-sized Superman cut-out with the face of George Washington. The figure features a QR Code to connect concerned voters with legislators and offer solutions to the current fiscal crisis facing the United States.

“If Congress had complied with the Constitution in 1979 by calling for the states to draft and the people to ratify a U.S. Balanced Budget Amendment, we could have saved more than $29 trillion in debt and prevented more than 70% decline in the dollar’s purchasing power,” explained David Biddulph, Co-Founder of Let US Vote for a Balanced Budget Amendment Citizen’s Campaign. “The recession is officially upon us, and we must act.”

“Any solution to the economic crisis, extreme taxation, and run-away spending will require a vote of the people. A Fiscal Responsibility Amendment would allow the people to vote on the solution and choose a brighter future for generations to come,” Biddulph continued. “Congress has ignored its responsibility for too long. It is time to let the people vote.”

Recent legislation introduced in the House of Representatives calls for Congress to set the time and place for an Article V convention for proposing fiscal constraints on the federal government unless the Archivist finds that Congressional Records do not support a finding that the thirty-four Applications required to call a Convention of States for Proposing Amendments was ever achieved.

“The Founders of our Country supported a Constitutional Amendment process for States to lead,” explained former U.S. Comptroller General David Walker. “If Congress fails to act on key Constitutional Amendment issues, then the States can and should lead. If we don’t put our federal finances in order, our economic and national security, and domestic tranquility will suffer over time.”