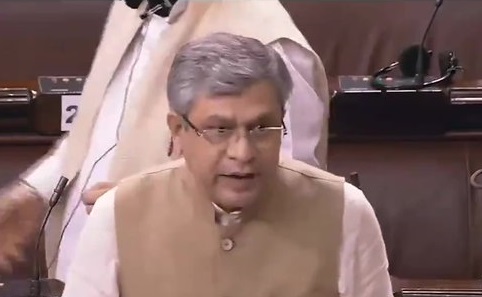 The government is likely to seek action against TMC MP Shantanu Sen, who tried to “assault” Union ministers Hardeep Singh Puri and Ashwini Vaishnaw in Parliament on Wednesday, sources said.

A meeting of Parliamentary Affairs Minister Pralhad Joshi, Leader of the House in Rajya Sabha Piyush Goyal, IT Minister Ashwini Vaishnaw, ministers Dharmendra Pradhan and V Murleedharan is currently underway on the issue.

The Bharatiya Janata Party (BJP) is readying to bring a privelege motion notice against Sen and demand proceedings in that regard, sources told India TV.

The matter escalated when TMC MP Shantanu Sen snatched papers from Communications and Information Technology Minister Ashwini Vaishnaw in the Rajya Sabha on Thursday, and tore those as the minister was about to make his statement on the alleged snooping row using Israeli spyware Pegasus.

TMC, Congress and other opposition party members, who had earlier forced two adjournments of the proceedings in the Rajya Sabha, rushed into the well of the house as Vaishnaw was called to make a statement on the issue.

Sen snatched the papers from the hands of the minister, tore and flung those in the air. As Vaishnaw’s statement was obstructed, he presented a copy of it on the table of the house.

Deputy Chairman Harivansh asked members to desist from unparliamentary behaviour, before adjourning the proceedings of the House for the rest of the day.

Opposition MPs had stalled the proceedings in the earlier part of the day as well, forcing two adjournments with not even officially listed papers being allowed to be laid.

They shouted slogans over alleged snooping and other issues.