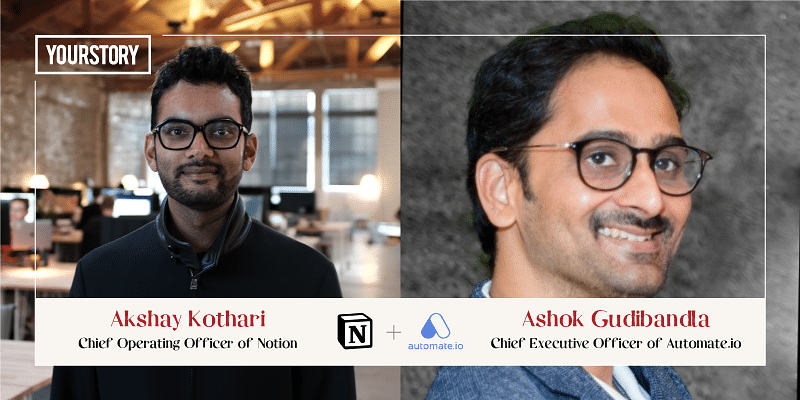 US-based ﻿Notion﻿, an all-in-one workspace for notes, tasks, wikis, and databases, has acquired Indian cloud startup Automate.io. While the deal size remains undisclosed, Notion says it will absorb the entire 40-member team at Automate, adding to its existing team of 150.

Based in Hyderabad, Automate.io will continue to operate independently post-acquisition to enable customers to take up new signups. In parallel, it will work with Notion on the engineering front to build a platform with an integrated ecosystem where anyone can put the building blocks together in few minutes and get the work done for 10 applications on the same platform, thus making them more productive at work.

With this acquisition, Automate’s home in Hyderabad will become Notion’s fifth global office — joining existing locations in Dublin, Tokyo, New York, and San Francisco. It will be Notion’s first engineering hub outside of the United States, where the company will continue hiring key engineering talent while supporting its community of passionate local users.

“Three months ago, we launched our API, and Automate.io was one of the launch partners. We realise that Automate is just going to accelerate work at Notion and bring in synergies for both our enterprise clients and individual users,” said Akshay Kothari, Chief Operating Officer of Notion.

Ashok Gudibandla, Chief Executive Officer of Automate.io added, “Our mission has always been to support businesses by automating repetitive tasks, and to be more efficient. We want users to spend less time dealing with challenging integrations, and more time building and creating the software they need. Together with Notion, we’ll be able to offer the same integration and automation experience to a broader set of users across the globe.”

Working on the synergy

Based in San Francisco, Notion was launched in 2013 by Ivan Zhao and Simon Last. Akshay joined them in 2018 as the ninth employee after selling off his previous company while investing in Notion.

Notion is a kind of collaboration tool that acts as a central nervous system to integrate all the applications people are using, thereby automating and streamlining their work processes.

For instance, if anyone is using a Microsoft or G-Suite, working on word docs or spreadsheets, they can embed that using Notion. Similarly, the sales CRM, notes taking software, wiki, databases, project management, etc — everything can be managed and collaborated on Notion.

“Notion is sort of native internet product and we are removing a lot of existing paradigms. You can start Notion as a very simple note-taking tool. But when you dive deeper, you realise that it’s a lot more powerful,” Akshay added.

With a slate of major platform partners like Zapier and IFTTT, as well as with the launch of the Notion API earlier this year, Notion says it has expanded access to thousands of integrations. The company plans to expand on these efforts with the acquisition of Automate.io.

Until Automate team joined them as launch partners, Notion executives say they had no idea about them. However, after listening to customer reviews during the event, Notion decided to reach out to them to understand more about the product.

“I connected with Ashok through a cold LinkedIn email. As we got talking, we realised how much our mission, culture, and values match the way we saw the future world — a place with interconnected applications with Notion as the connective tissue,” Akshay told YourStory.

Notion is working on talking to a lot of these applications and building connections.

“This is actually an area that Ashok and his team have spent five years — working on 200 key applications and making sure it’s a seamless experience for customers. And, today, I think it’s amazing how a cold LinkedIn email led to this acquisition today,” Akshay chuckled.

Ashok further emphasised that what attracted him towards Notion were the gaps they can bridge as a team. He believes that Automate.io has the capability to bring in the required value proposition that Notion needs in the Indian context.

“While adoption of Notion today is almost synonymous to G-Suite among the burgeoning startups in India, bridging the connectivity gaps and making it faster, seamless and bringing in the required automation will make it a phenomenally great value proposition for all the new users that are coming on to Notion. And, that’s as a prospect I am really looking forward to,” added Ashok.

Notion has grown its usage by about 5x, while India grew almost 8x in the last 18 months. Also, the startup said that the adoption is rising both among individuals as well as small and late-stage startups.

Going forward, with added tech capabilities from Automate.io, Notion will focus on streamlining automation. “Tomorrow, we hope that with just a couple of clicks, you will be able to connect your database with any of the other applications without having to leave the Notion app and make it a more flexible setup. So that’s going to be the big focus for us,” added Akshay.

Both Ashok and Akshay are also banking on the rising SaaS opportunity in India. Ashok believes that although India has a great SaaS potential, there is still a need to focus on the brand building aspects of customer acquisition, building the customer acquisition channels, and focusing on great customer experience.

“Having said that, we’re not claiming to do everything that every SaaS company does. We’re, in many ways, a connector and an information hub that people can use to be more productive. We have seen growth of companies in India like Browserstack, Postman, and Freshworks and they are really inspiring,” Akshay added.