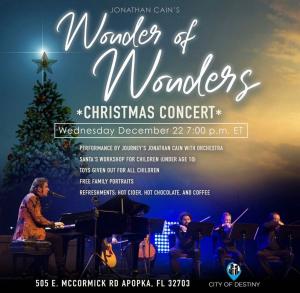 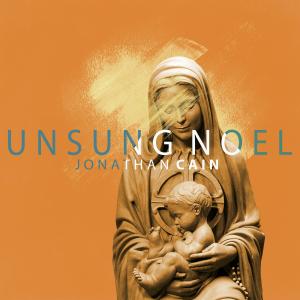 How many ‘behold’ songs are there? None! I always like to write what hasn’t been written… Behold means to look, see, notice… When I went and looked up the etymology of the word, it was deep.”

Taking people on an adventure through the Nativity during the concert, Cain will lead his Top 5 Christmas radio hit “Wonder of Wonders,” which released in 2019 and features GRAMMY®-nominated, Platinum®-selling Newsboys lead singer Michael Tait. The event will further highlight original songs like “Unsung Noel,” the title track to Cain’s Billboard-premiered album, DVD, vinyl recording (https://jonathancain.org/product/unsung-noel-vinyl-album/) and companion, full-length Amazon Prime Video, “No One But You Jesus” that is from Cain’s acclaimed Oh Lord Lead Us EP released globally last month, and a new song written for this event, “Behold.”

“How many ‘behold’ songs are there? None!” exclaims Cain. “I always like to write what hasn’t been written, and it’s so important to be fresh in the Word. Behold means to look, see, notice, recognize. When I went and looked up the etymology of the word, it was deep.”

Behold, see what God has done

He sent his only Son to reign upon the Earth

Rejoice, child of the Most High, rejoice in silent night

(From the “Behold” chorus)

The upcoming Christmas concert will also highlight classics like “Angels We Have Heard On High,” “Oh Holy Night” and “Do You Hear What I Hear.”

Recently golfing with legendary coach, Lou Holtz, and featured during Troy and Tracey Duhon’s Giving Hope gala in New Orleans, Cain will also share his personal faith story along with new music in December on the debut episode of the Pure Flix show, “Rockin On Heavens Door” (https://app.pureflix.com/videos/471778854920/rockin-on-heavens-door-trailer), which features Cain’s “Oh Lord Lead Us” as its theme song.

With more solo music to come, Cain also joins his band Journey for its 40-date “Freedom Tour 2022” launching Feb. 22 in Pittsburgh and featuring Billy Idol on the first leg of the tour with Toto taking over as support act starting April 7 in San Diego, CA.

Releasing five solo albums over the last several years, including his 2019, Billboard-featured More Like Jesus that Parade calls a “triumphant new album,” the solo recordings follow a long line of hits that bear this artist’s signature. As a member of Journey, Cain has written or co-written such massive radio hits as the best-selling catalog rock song in iTunes’ history, “Don’t Stop Believin’,” and “Who’s Crying Now,” “Open Arms,” “Faithfully” and many more.

All the latest news about Cain, his solo albums and Rolling Stone-lauded, Publishers Weekly-bestselling Don’t Stop Believin’ book, touring, speaking engagements, philanthropy and more can be found at:

In 1976 Jonathan Cain released his first solo record, Windy City Breakdown. In 1979 he joined the band, The Babys, and in 1980 joined the rock band, Journey, rounding out the songwriting genius behind the defining album, Escape, which was RIAA certified Diamond this year. Cain’s signature piano, synth playing and songwriting contributions with Journey, The Babys and Bad English have earned him many Billboard hits, multiple Gold, Platinum and Diamond-selling records, a Star on the Hollywood walk of fame, a GRAMMY nomination and the best-selling catalog rock song in iTunes’ history (“Don’t Stop Believin’”). Journey was named as the fifth best band in rock history in a 2005 USA Today opinion poll, was inducted to the Rock & Roll Hall of Fame in 2017 and continues today, selling out major venues worldwide. Cain’s solo albums that released amidst acclaim in recent years include: What God Wants To Hear (2016), Unsung Noel (2017), The Songs You Leave Behind (2018), More Like Jesus (2019) and Piano Worship (2020).

About The Fuel Music:

Established in 2008, The Fuel Music & Management, LLC, is a leading artist management and artist solutions company that independently distributes music internationally. Based in Nashville, TN, the Fuel team brings over 70 years of combined music industry experience in record label operations, major label distribution and marketing, and artist management for artists ranging from upstart bands to GRAMMY Award-winning, multi-Platinum artists. More information on the company can be found at www.thefuelmusic.com.

* FOR MEDIA ONLY: Jonathan Cain photos and more press materials are available to download at https://app.box.com/v/JonathanCainSoloPress.