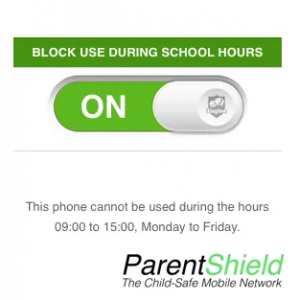 ParentShield – the only Children’s mobile network – polled 17,000 UK schools and nearly 1:5 reported a preference for a total ban of all mobile phones.

Yes, children should use phones at school because in an emergency on the way to or from school a phone is the best way to get in touch with your parent/carer”

DERBY, DERBYSHIRE, UK, December 11, 2021 /EINPresswire.com/ — While half of primary school students ( and presumably also their parents ), and 85% of secondary school students believe mobile phones should be allowed inside school, an increasing number of schools are reporting a preference to ban mobile phones completely, according to recent surveys of schools and students.

ParentShield, the specialist child-protection mobile network, polled 17,000 UK schools for the second year running and discovered an increase in the number of schools favouring a total ban on mobile phones inside the school gates. The increase has been steady in the UK since France implemented a total ban of all mobile phones and internet-connected devices back in 2018.

Because its network allows for the total blocking of calls, texts and mobile data with its SchoolBlock technology during school hours, a total ban is completely disproportionate, argues the Mobile Network, since phones provide a vital safety link for students before and after school.

A separate poll of students themselves, undertaken at the same time by Votes for Schools showed a distinct opposition to total mobile phone bans with less than 15% of secondary school students approving of such a move*

The use of blocking technology at Network Level is a far more effective way of ensuring phones can be available for vital communications and child protection at the start and end of the day, argues ParentShield. Some 6% of schools polled reported collecting all phones at the start of the day and handing them back to students at home time but this becomes a huge logistical challenge, and practically impossible in a large school. The ability for parents and carers to comply with school rules by simply pressing a button in their remote control panel is a very simple and far more effective solution. Even if a child were to ‘forget’ to hand their phone over, the ban is still effectively enforced until home time.

As it is a Mobile Network and SIM card, ParentShield is not restricted by the constraints of individual devices. The only way a signal will be interrupted is if the entire network fails or if the user puts their smartphone on airplane mode. However, if they do that, they won’t be able to share text messages or calls with other people. The ParentShield SIM and all the controls it brings will work equally well in a £10 simple phone with no apps or internet connectivity as it will in a £1200 flagship smartphone.

The child-safe and family-friendly roaming SIM has quickly established itself as a major hit with parents of pre-teens and teenagers alike. And because they can stay connected, many kids love it too.

ParentShield is the UK’s only children’s Mobile Network designed specifically with children in mind, incorporating a wide range of tools – from call recording to keyword alerts – that allow parents to oversee their child’s phone usage without invading their privacy. It can work with any unlocked feature-phone, smartphone or smartwatch and does not require any app or parental controls to be set on the device. Its features are handled remotely, allowing for optimal convenience while kids retain their independence. The SIMs work across the UK and beyond.

Being a SIM-based network-side service, parents can provide ANY unlocked phone to their child and give them a totally normal mobile phone experience without the stigma of being a locked or crippled “parental control” phone that you wouldn’t want to show your friends in the playground.

'You’re Not from Around Here, Are You?' Shares a Northerner’s Experience of Falling in Love with the South

'You’re Not from Around Here, Are You?' Shares a Northerner’s Experience of Falling in Love with the South