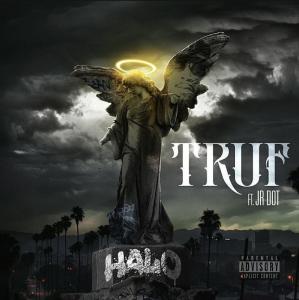 The Distinguished Rapper, Songwriter, and Hip-Hop Performer Announces the Release of the Self-Produced Single on His label EMP Music Group

LOS ANGELES, CALIFORNIA, US, June 22, 2022 /EINPresswire.com/ — Rising Rap Star, TRUF has released his newest single entitled, “Halo”. According to him, this song is inspired by “The success that comes after hard work”. He adds, “It’s about looking back at the past and seeing how far we have come”. The song has elements of Hip-Hop and Rap that are sure to capture the listeners attention and get them dancing. Truf notes that “Halo” is unlike any other song he has released. His newest single revolves around the concept of goals that he has already accomplished. He is fueled by his prior success and has all the “fire power” it takes to keep writing hits. The song celebrates how far Truf has come and grown as an artist. He adds, “What makes it different is that I have reached some milestones in life and as an artist that gives me the fire power needed to write a song of this magnitude using all facts. Nothing in this song is a hope or a goal. These lyrics are the “TRUF””.

This 5th single release from the dynamic artist follows his previous releases of “Tik Tik Boom”, “BODY(feat. The Game)”, “Tear It Down”, “The Return” and “Dinner SoulFood Mixtape, Vol.3” which show off his musical style. His style blends elements of R&B, blues, and classic West Coast rap. Truf is on a mission to share his story through the power of his music.

Born and raised in Carson, California as the youngest of four children, Truf was surrounded by

an environment full of obstacles. He was able to stay off the streets by devoting his time towards sports in Carson High, where he became a star Point Guard. In highschool was where Truf found his undying passion for music. He began freestyling on the streets of Carson and Long Beach where he quickly made a name for himself. His main inspirations are 2Pac, Eminem, JayZ, Notorious B.I.G, DMX, Nas, and Snoop Dog. Truf realized he could bring a fresh voice to rap while taking inspiration from legendary musicians. Renowned rapper, The Game, featured on Truf’s popular song “BODY”. He continues to make his mark across the nation with his music. Truf just finished up his nationwide tour with Freeway Rick Ross and has opened for iconic artists such as Bone Thugs-n-Harmony, Method Man, Too Short, Dogg Pound, and DJ Quik.

Not only has he mastered the craft of music, he is also an entrepreneur. Truf has created his own music label titled, EMP Music Group. He also has entered the world of fashion by creating EMP Apparel.

“Halo” by Truf can be found at Music Apps such as Spotify, Apple Music, Youtube Music, and iTunes

For more information about Truf, please go to https://trufcity.com or by following him on social media @trufcity