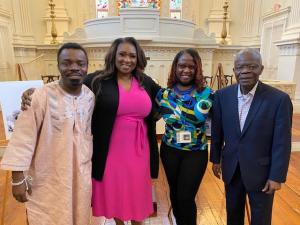 For centuries Africa has had sophisticated Kingdoms that laid the foundation for governments throughout the world, yet few know of Africa contributions to modern society. One such Kingdom was Futta Jaloh its King Ibrahiima Sorie (King Sori) and his Heir Apparent, Prince Abdul-Rahman Ibn Ibrahima Sorie (Prince Sori), Father and Son. Unfortunately, Prince Sori, was captured and enslaved for 40 years in American which ended his reign. However, in 2022, King Sori dynasty is being unearthed and cemented in World history by his decedents, His Royal Highness Dr. Artemus Gaye (Prince Artemus Gaye) and Her Royal Highness, Karen Chatman (Princess Karen Chatman).

Prince Artemus Gaye, alongside the famed author Abu Bakarr Jalloh, details the superior and intellectual building blocks of the Sori’s Kingdom that paved the way for many European and Western countries to base the Governmental system upon. Jalloh writes in, “From Babylon to Fuuta Jaloh” the Dynasty that King Sori ruled. Both authors shed light on the advancement of the kingdoms which King and Prince Sori ruled. Jalloh states that Futta Jaloh, the homeland of Prince Sori, “theocratic model, the first nation created based on the Rule of Law with a governing constitution.” This statement supports what is detailed in Prince Artemus Gaye’s book of the history and the kingdom of King and Prince Sori.

Prince Artemus Gaye and Princess Karen Chatman have been invited to meet with the Elders and the Royal members of the African countries of Morocco, Liberia, Guinea, Fuuta Jaloh, and Sierra Leone. The two are planning to visit the African countries in July of 2022 and hopes that other descendant of King and Prince Sori will accompany them on this fantastic journey back in time.

Prince Artemus Gaye and Princess Karen Chatman are asking all decedents of King and Prince Sori to contact them at royalaffairsoffice@theprincesskarenfoundation.com