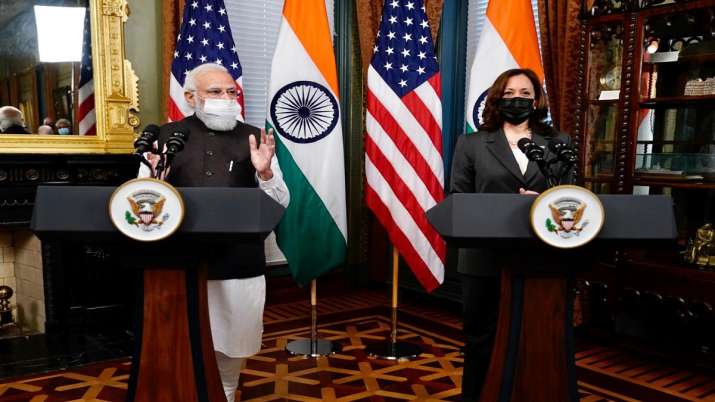 PM Modi and Kamala Harris issued a joint statement before they proceeded for a one-on-one talk.

Kamala Harris described India as a “very important partner” to the US and welcomed New Delhi’s announcement that it will soon resume vaccine export.

“India and America are natural partners. We have similar values, similar geopolitical interests,” Modi said in a joint media appearance with Harris, the first-ever person of Indian origin to be elected as the vice-president of the United States.

Noting that India and the US are the largest and oldest democracies, Modi said the two countries share values and their coordination and cooperation is also gradually increasing.

This is the first meeting between the two leaders. Harris had earlier spoken with Modi over the phone in June during the COVID-19 crisis in India.

“You are the source of inspiration for so many people across the world. I am completely confident that our bilateral relationship will touch new heights under President Biden and your leadership,” Modi told Harris.

He invited the 56-year-old Democratic leader to visit India.

“Both President Biden and you assumed office at a time when our planet faced very tough challenges. In a short time you have had many achievements to your credit be it COVID-19, climate change or the Quad,” Modi said.

“As relates to the Indo-Pacific, the US stresses on maintaining a free and open Indo-Pacific,” Harris said, amidst China’s aggressive moves in the strategically vital region.

India, the US and several other world powers have been talking about the need to ensure a free, open and thriving Indo-Pacific in the backdrop of China’s rising military manoeuvring in the region China claims nearly all of the disputed South China Sea, though Taiwan, the Philippines, Brunei, Malaysia and Vietnam all claim parts of it. Beijing has built artificial islands and military installations in the South China Sea.

She said the world is more interconnected and more interdependent than ever before.

“And the challenges that we face today have highlighted that fact. COVID-19, climate crisis and the importance of our shared belief in the Indo-Pacific region,” she said.

“We have had the opportunity to speak after you assumed the Vice Presidency. One of our interactions happened when India was battling a very tough wave of COVID-19 infections. I recall your kind words of solidarity that time,” Modi added.

Kamala Harris and PM Modi are known to have interacted so far through only one phone call.

Although she had spoken to several world leaders soon after becoming Vice President, she had a phone conversation with Modi only in June when she discussed President Joe Biden’s offer to send vaccines to India from the US stockpile when it suffered a Covid surge.

Modi tweeted after the call, “I deeply appreciate the assurance of vaccine supplies to India as part of the US Strategy for Global Vaccine Sharing. I also thanked her for all the support and solidarity from the US government, businesses and Indian diaspora.”

In protocol terms, Harris is the host of Modi since he is not a head of state like President Biden, but a head of government. However, in practical terms, the President treats Prime Ministers of major countries as equals.

The Vice President’s Ceremonial Office, where Modi and Harris will meet, is in the Eisenhower Executive Office Building (EEOB), which is located next to the West Wing on the White House premises, according to the White House. | READ MORE

The historic site was originally used by Navy Secretaries and later for a short time by the Army chief of staff. The late President Herbert Hoover also used it briefly after a fire in the West Wing in 1929.

It was turned over to Vice Presidents in 1960.

ALSO READ | Eisenhower meeting: All about the iconic building