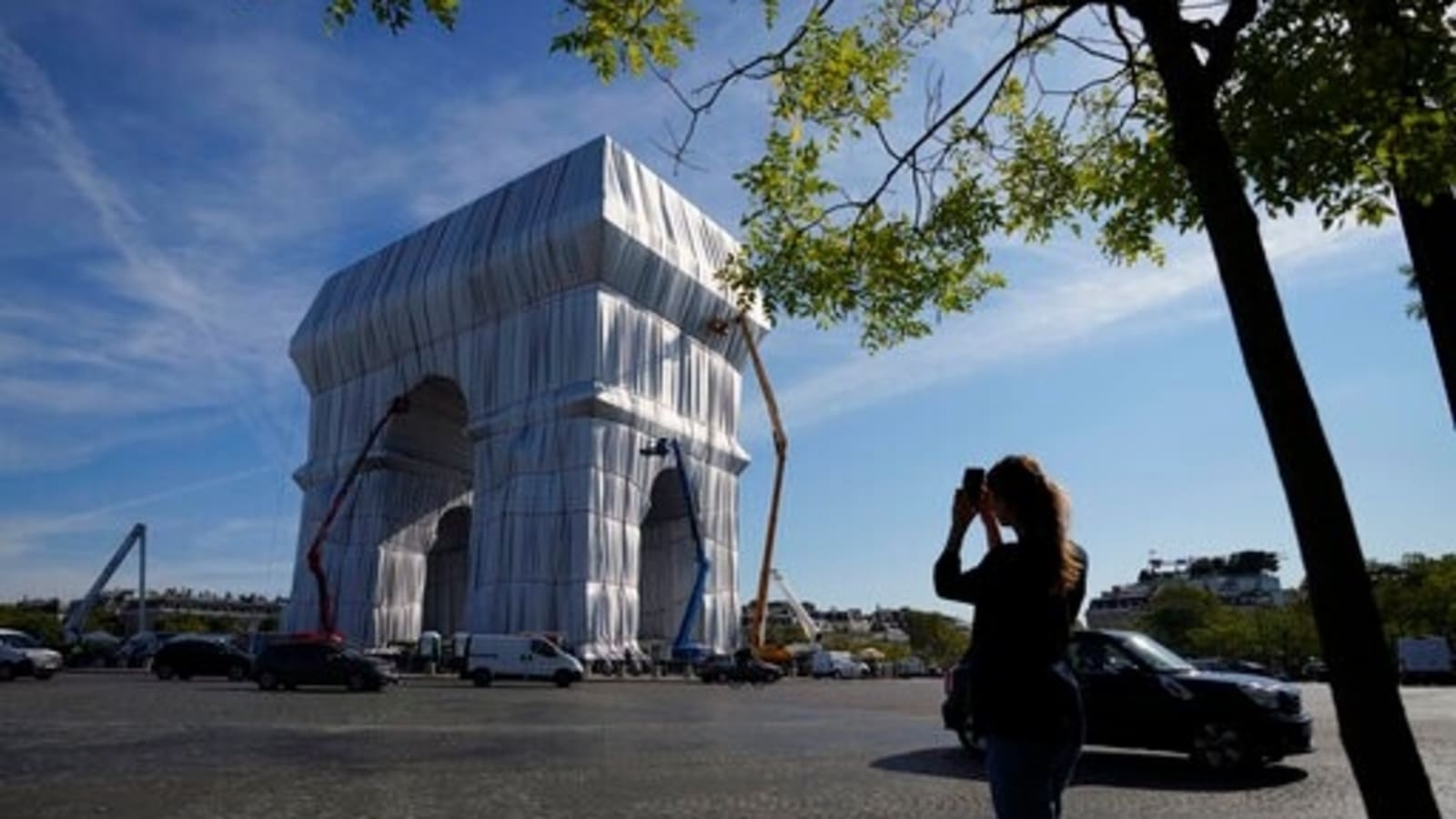 The city of Paris is unveiling a monumental artwork built around an actual monument: the Arc de Triomphe completely wrapped in silver and blue fabric.

The installation by late artist couple Christo and Jeanne-Claude, who conceived the project in 1961, will open on Saturday. Visits will take place for almost three weeks. At weekends, the Arc de Triomphe’s traffic-heavy roundabout will be entirely pedestrianized.

Visitors to the famous Napoleonic arch, which dominates the Champs-Elysees Avenue, will not only be able to see the gleaming fabric, but to touch it too — as the artists had intended.

Those climbing the 50 meters (164 feet) to the top will step on it when they reach the roof terrace.

At a press conference on the project entitled “Arc de Triomphe, Wrapped,” France’s Culture Minister Roselyne Bachelot called it “a formidable gift offered to Parisians, the French and beyond, to all art lovers.”

Bachelot added that it was “a posthumous testimony of artistic genius.”

Bulgarian-born Christo Vladimirov Javacheff met Jeanne-Claude Denat de Guillebon in Paris in 1958 and they later became lovers. The idea for the artwork was born in the early ’60s, when they lived in Paris. Jeanne-Claude died in 2009, and Christo in May last year. The monument was to be wrapped last fall, but the Covid-19 pandemic delayed it.

Christo “wanted to complete this project. He made us promise him that we will do it,” the couple’s nephew, Vladimir Yavachev, told The Associated Press.

The 14 million-euro ($16.4 million) project is being financed through the sale of Christo’s preparatory studies, drawings, scale models, and other pieces of work, Yavachev said.

Passersby on Thursday looked up in awe. “It makes me think of a big gray elephant placed in Paris on the Champs-Elysee” said 47-year-old Thomas Thevenoud, who works nearby.

“You really rediscover the beauty of the form,” said 39-year-old Parisian Agnieszka Wojel. “I couldn’t stop taking pictures because it’s extraordinary… We are very lucky.”

The artists were known for elaborate, temporary creations that involved blanketing familiar public places with fabric, including Berlin’s Reichstag and Paris’ Pont Neuf bridge, and creating giant site-specific installations, such as a series of 7,503 gates in New York City’s Central Park and the 24.5-mile “Running Fence” in California.

Yavachev said he plans to complete another one of their unfinished projects: a 150-meter-tall (492 feet) pyramid-like mastaba in Abu Dhabi.

“We have the blueprints, we just have to do it,” he said.