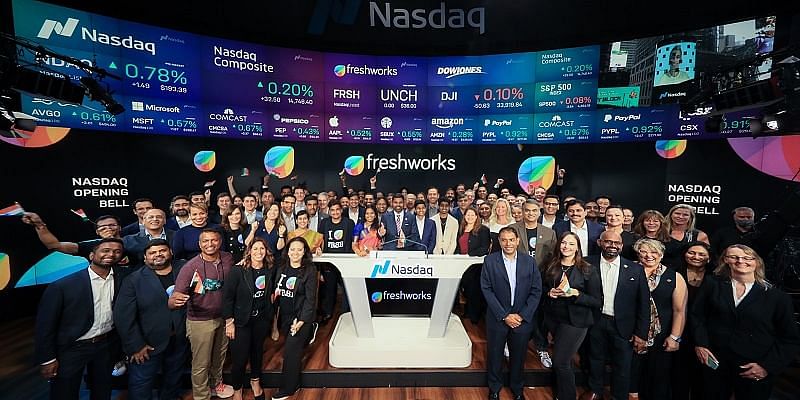 ﻿Freshworks﻿ on Wednesday became the first Indian unicorn to go public in the US and with that, more than 500 of the B2B SaaS company’s employees in India have become crorepatis (a person whose assets are worth at least one crore or Rs 10 million), said Co-founder and CEO Girish Mathrubootham.

The 46-year-old entrepreneur who grew up in the ancient city of Trichy in Tamil Nadu now feels a “great sense of fulfilment” for ensuring wealth creation for his employees, thanks to the Freshworks initial public offering (IPO).

“It gives me a great sense of fulfilment today because I feel like this IPO has given me an opportunity as a CEO to fulfil my responsibility to all the employees of Freshworks till date, including those who are ex-employees today, and everyone who has believed in us over the last 10 years and contributed to Freshworks,” Girish told reporters in a press briefing.

On Wednesday, the software-as-a-service (SaaS) company debuted on the Nasdaq Global Select Market at a price well above its IPO target range to raise $1.03 billion at a valuation of over $10 billion.

The Accel and Sequoia Capital-backed SaaS company, which is listed under the ticker symbol ‘FRSH’ on the Nasdaq, sold 28.5 million shares at $36 apiece, above its increased IPO price range of $32-$34 a share, signalling strong investor interest.

Today, at least 76 percent of Freshworks employees own shares in the company, revealed Girish. That number, he added, would’ve been higher if not for the recent spate of hirings in the past few months which brought that number down to 76 percent.

Of the more than 500 new crorepatis created due to the Freshworks IPO, at least 70 of these employees are below 30 years of age, many of whom joined the company fresh out of college a few years ago, said Girish.

“I think this (employee wealth creation) is truly something that India needs to do more of and I personally believe it’s well-deserved and that all our employees have earned it. Because all of these employees have truly contributed to Freshworks, and I truly believe that wealth has to be shared with the people who created it. It’s not just for the founders to get rich or the investors to get rich,” he said.

Girish Mathrubootham, or “G” as he is referred to as by his colleagues and friends, defined the Indian SaaS revolution in 2010 when he started what was then-called Freshdesk with Co-founder and CTO Shan Krishnasamy.

At the time, the success of his startup cemented India’s position as a B2B SaaS destination. And today, with Freshworks marking the first-ever US listing by an Indian B2B SaaS unicorn, Girish is again paving the way for India’s SaaS startups and unicorns to grow and scale globally.

Nevertheless, even as a publicly traded company, Girish emphasises that it’s still early days in terms of the impact and the gains that can be expected for those who truly believe in Freshworks’ mission. He explained,

“What I am even more excited about is that as we continue our public journey, there’s a massive opportunity for us to create life-changing impact for many employees and people who believe in our mission. And those who know that it’s still early days for Freshworks, will see the gains.”

Freshworks (then called Freshdesk) was part of YourStory’s  Tech30 cohort in 2015 at its annual flagship event TechSparks.  For over a decade now, India’s largest tech and startup summit TechSparks has been featuring the Tech30 — India’s top 30 most promising early-stage tech startups.