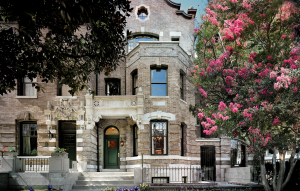 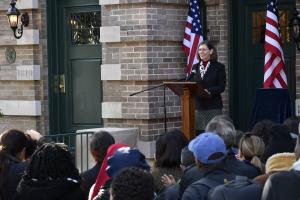 Ms. Debra McClane, architectural historian, explains the rigorous review process and the significance of being approved for the National Register of Historic Places 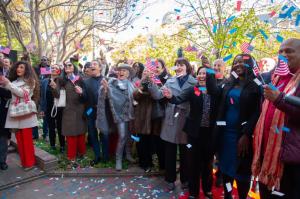 Scientologists and the community join in the celebration 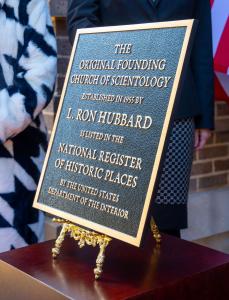 Scientologists and community leaders celebrate the church L. Ron Hubbard established with an unveiling of the plaque commemorating its historic listing

So, being listed in the National Register is a major acknowledgement of the value of a property …as a historic resource and confirms its status as a place worthy of preservation and commemoration.”

WASHINGTON, DC, USA, November 25, 2022 /EINPresswire.com/ — Community leaders and Scientologists gathered at the Original Founding Church of Scientology of Washington, DC, for a ceremony commemorating the listing of the site on the National Register of Historic Places by the US Department of Interior.

The event was a celebration, complete with the unveiling of the commemorative plaque, speeches, confetti, and tours of the historic site. It was held at 1812 19th Street NW, Washington, DC, the original historic location of the first organized Church of Scientology in the world. This historic church building now joins two other properties of historic significance to Scientology that are recognized on the National Register of Historic Places – the L. Ron Hubbard House in Bay Head, NJ, where he wrote Dianetics: The Modern Science of Mental Health in 1950 and the Camelback House in Phoenix, AZ, where Mr. Hubbard later authored the first basic books of Scientology and founded the Hubbard Association of Scientologists.

The rigorous US Department of Interior’s National Register application requires that at least one of four criteria be met in order for a property to be listed. According to the application, the Scientology property met two of these. One, “the property must make a contribution to the major pattern of American history” and two, “is associated with significant people of the American past.”

The application researched and written by architectural historian, Ms. Debra McClane, addressed the first criterion stating, “The building at 1812 19th Street, NW, Washington, DC, is eligible for listing in the National Registry of Historic Places in the areas of Philosophy and Religion as the site of the first organized church of the Scientology religion, the Founding Church of Scientology of Washington, DC. The formation of the Founding Church of Scientology is of seminal importance to the Scientology religion because it was due to its effective ecclesiastical organizational structure that the religion was able to expand rapidly throughout the world during the late twentieth century.”

Later in the application she addressed the second criterion stating that, “The building is eligible for listing for its historical association with Lafayette Ronald (L. Ron) Hubbard (1911-1986), who is recognized as an important leader in the twentieth century. Hubbard has been described as among the most significant religious figures in twentieth-century American religious history and was the founder of one of the few new major religions established in the twentieth century. Several secular studies on religion have documented his influence with regard to American religious history. In 2014, for example, Smithsonian magazine listed Hubbard among the top 11 most significant religious figures in American history along with such leaders as Billy Graham, Joseph Smith, Mary Baker Eddy, William Penn, and Brigham Young.”

During the celebration, Ms. McClane spoke to the crowd saying, “I have worked with the Church and have seen their intense care and high quality in the restoration of historic sites….This original Founding Church of Scientology site was previously recognized for its architectural significance as a property with the Dupont Circle Historic District. Today, we celebrate a new recognition. To fully grasp the significance of this one, I want to describe what it signifies.”

“This property has been a special place in all your hearts for a long time and now with this National Recognition as a Historic Place – the world will know it as the birthplace of the first Church of Scientology – the original Founding Church.”

Dr. E. Gail Anderson Holness, prominent faith leader in Washington and pastor of the Adams Inspirational African Methodist Episcopal Church, offered her thoughts in her address saying, “Having a religious faith’s historic building officially recognized helps to maintain the legacy of that faith. In this case, this recognition shows where Scientology started and how far it has come.” During her presentation she shared many common values between her Christian faith and that of Scientology.

“As a Christian Pastor that represents an Abrahamic monotheistic religion based on the life and teachings of Jesus of Nazareth, I believe it is important that we become aware of the religious and nonreligious life of others in our world.”

“From a Christian pastor’s perspective, regarding the Church of Scientology and the purpose for which we are here today, which is to celebrate this auspicious occasion, I believe it is important that we affirm each other in our spiritual beliefs and practices. It will allow us to co-exist and make our world a more palatable place for all and we will learn that we are more alike than we are different.”

The city of Washington, DC, has a deep significance for members of the Scientology religion.

Mr. Hubbard arrived in Washington, DC, as a 12-year-old in 1923, attended prep school, became an Eagle Scout, and later attended George Washington University where he was an editor of the school newspaper as well as an engineering student.

Following World War II, Mr. Hubbard returned to the city and wrote Dianetics: The Original Thesis, the forerunner to Dianetics: The Modern Science of Mental Health .

He established the original Founding Church of Scientology in 1955 at 1812 19th Street NW and incorporated the Church on the 4th of July 1955. Mr. Hubbard became its first Executive Director and forged organizational patterns for all the Scientology Churches to follow throughout the world.

The property at 1812 19th Street NW is now also listed locally in the DC Inventory of Historic Sites as approved by the DC Historic Preservation Review Board, a government body comprised of appointed preservation professionals. The L. Ron Hubbard House is now maintained as a museum with many original artifacts from the time Mr. Hubbard worked in the building.

As the congregation of that historic original Founding Church of Scientology outgrew its location at 1812 19th Street NW, the Church moved into increasingly larger buildings in the same Dupont Circle area of Washington, DC, including a location at 1701 20th Street NW that is now its National Affairs Office.

For more information on the religion of Scientology and its many locations around the world, go to www.scientology.org.

To find out more about other historic locations, go to https://www.lronhubbard.org/landmark-sites/.