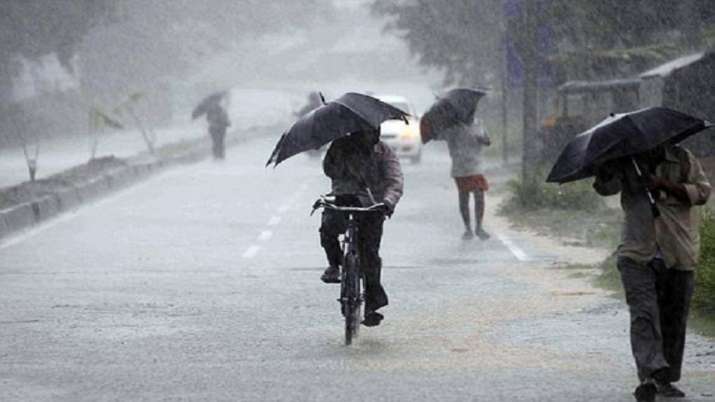 The record heavy rain that is pounding Odisha for 24 hours has claimed at least three persons died, hit over 19.53 lakh people, and inundated extensive areas in 11 districts prompting authorities to launch evacuation of people from low-lying areas on Monday, officials said.

The capital city of Bhubaneswar received 195 mm rainfall in 24 hours, breaking a 63-year-old record, while the pilgrim town of Puri recorded 341 mm, the highest in 88 years, during the period as rain clobbered large parts of the state, they said.

A senior official at the Special Relief Commissioner’s office said heavy rains during the past three days triggered by depression in the Bay of Bengal have left a trail of devastation in at least 53 blocks spread over 11 districts of the state.

“As per preliminary report received from districts, three human causalities have been reported. Two deaths have taken place in Kendrapara district due to wall collapse and one in Khurda district due to drowning. Detail investigation is on by the district administrations,” the official said.

There is a report that another person has been swept away by a nullah near Salipur in Cuttack district and authorities are verifying it, he said.

As the rain lashed most parts of the densely populated coastal region of the state, the administration by Monday evening evacuated 3,819 people from low-lying areas and provided cooked and dry food to the evacuees in different shelters.

According to the preliminary assessment, 265 kutcha houses have been damaged while as many as 24 villages are marooned. Twenty villages have been marooned in the Koraput district, while coastal Puri has three and Cuttack one.

The famed Sun Temple at Konark is in knee-deep water which forced the administration to use pump sets to remove water from its extensive premises, officials said.

Rainwater has also entered the Kedar-Gouri Temple, Baital Mandir in Bhubaneswar, and Akandalamani Temple in Bhadrak district, they said. Bhubaneswar, Cuttack, Puri, and Paradip towns were scenes of destruction caused by the disastrous rain. Vehicles were seen floating near the ISKCON temple in the Nayapalli area of the state capital, where gushing water swamped homes and markets.

An ambulance, which had got stuck on its way to a hospital in Bhubaneswar’s Old Town area was seen being pushed to a dry patch of the road by locals. Some houses in the Dumuduma locality built on farmland have developed cracks, locals said.

Waterlogging was reported from several areas of Bhubaneswar as the state capital recorded 195 mm rainfall in 24 hours till 8.30 am on Monday. The city broke its 63-year-old record when on September 9, 1958, the city had received 163 mm rainfall.

There was waterlogging in a large part of Cuttack city too and rainwater entered many residences. LPG cylinders, plastic chairs, utensils, and other household materials were seen floating like paper boats, while the accumulated rainwater ingressed the Acharya Harihar Cancer Institute.

The plaster of the ceiling of the surgery unit of SCB Medical College Hospital in Cuttack fell off but luckily it did not hit any patient or attendant, an official said.

Cuttack Municipal Corporation (CMC) commissioner Ananya Das said 200 pump sets are evacuating water from low laying areas and people in affected areas are being given dry food. Heavy rain, triggered by a deep depression, has been battering Odisha over the last few days.

Many roads in the affected 11 districts such as Kalahandi, Kandhamal, Koraput, Cuttack, Jajpur, Puri, Jagatsingpur, Kendrapara, Dhenkanal, Khurda, and Angul, have been washed away due to the heavy rainfall, the official said.

The Central Water Commission has warned of the possibility of a flood following the rains. But Dhiren Kumar Samal, the engineer-in-chief of the water resources department, said most of the reservoirs are holding less than 50 percent of their capacities.

The Hirakud reservoir is filled to 78 percent, while Rengali dam has the highest at 83 percent. The remaining six major dams are only 50 per full. “Besides, most of the river basins are in good condition. Therefore, the possibility of a flood is not anticipated now. However, we are keeping a strict vigil on the developing situation,” Samal said.

The water resources department has identified some vulnerable points on river banks and a strict vigil is being maintained to avoid any breach, he said.

Samal said the lower basin of the rivers in districts like Puri, Jagatsinghpur, Khordha, Kendrapara, Cuttack, Nayagarh, Boudh, Jajpur, Subarnapur, has already received an average rainfall of more than 100 MM but none of the rivers have crossed the danger level except Jalaka.

Jalaka water level was at 5.68 at Mathani at 6 pm on Monday compared to its danger level of 5.5 m and may cause flood situation in seven-gram panchayat areas in Balasore district, the official said.

Meanwhile, the IMD in its latest bulletin issued at 8 PM said that the deep depression over north Odisha has moved further west-northwestward during the past six hours at a speed of 13 kmph and now lay centered near Keonjhargarh.

“It is very likely to continue to move west-northwestward across north Chhattisgarh & Madhya Pradesh during the next 48 hours. It is likely to weaken into a depression during the next 12 hours,” the met office said.

In the morning, the deep depression had crossed the coast near Chandbali in Bhadrak district causing widespread rain across the coastal region of the state.

In its forecast for 8.30 AM on Tuesday, the IMD has issued a ‘red’ warning, predicting heavy to very heavy and extremely heavy rains in Sambalpur, Deogarh, Angul, Sonepur, Dhenkanal, Jharsuguda, and Bargarh. All these districts are located in the upper Mahanadi basin.

The weather office has asked all ports to hoist local cautionary signal – III as the sea is rough.