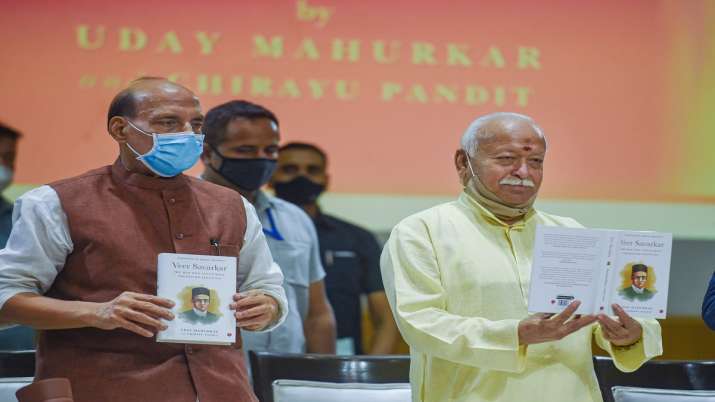 RSS chief Mohan Bhagwat on Tuesday said Hindutva is one and it would the same till the end. Lamenting on the fact that there is a lack of correct information about Veer Savarkar in today’s India, Bhagwat explained that a campaign to defame the activist and writer is also prevalent. He also stressed that in the current political scenario in the country, the thoughts of the flagbearer of Hindutva are much needed.

While speaking at the book launch — ‘Veer Savarkar: The Man Who Could Have Prevented Partition,’ Bhagwat said, “There is a lack of correct information about Veer Savarkar in today’s India. Savarkar’s thoughts are needed. The things that are needed of Savarkar in today’s time are in this book. There is a campaign to defame Savarkar. They are defaming because of their nationality of India, because their shop may be closed.” Mohan Bhagwat further said that Sir Syed Ahmed is the father of Muslim discontent.

Bhagwat agreed that the move to change the names of the roads may not be completely correct as there are many patriotic Muslims, whose names should resonate. “Our method of worship is different, but the ancestors are the same. They are very patriotic. Those who went to Pakistan during partition, did not get prestige there.” He said that after independence Savarkar was maligned.

He further said that when this uproar started about divided thoughts, then Savarkar talked about Hindutva. “Hindutva is one which is eternal. We know that now after 75 years, Hindutva needs to be spoken out loud. Talk of separatism cannot be a matter of privilege. Savarkar had said that there is no appeasement of anyone. Savarkar’s predictions one after the other have come true. After 2014, the national policy will follow the security policy, which has become clear.”

Mohan Bhagwat further said that Savarkar never accepted anything blindly. “He didn’t hate Muslims, he knew Urdu too. There are many thoughts in a democracy. Those who do not know the generosity of Savarkar’s ideas, they defame there. Savarkar had given a statement that Gandhiji is needed by the country. Gandhiji should work keeping his health in good health, because he is needed. Ambedkar and Gandhiji have been appreciated by all, but petty people have made frivolous things and condemnation about Savarkar.

He further said that walk equally, equal in duties and equal in fruits, there is no minority. Our motherland cannot be divided. Lohia also used to talk of Akhand Bharat.

On the occasion, Defence Minister Rajnath Singh was also present. Singh said that “people are not able to understand” Savarkar because a lot has been said by many people with different ideology.

“This book is written after so much hard work and research. I congratulate the authors for it. Reading about nationalist Veer Savarkar is not easy. He has done so much that it’s difficult to put that into just one book. This book will clear out rumours about the life of Savarkar. A lot has been written on Savarkar by those who have a certain ideology. Hence people are not able to understand him,” the senior Bharatiya Janata Party leader said.

“You may have a difference of opinion about our heroes but to have one perspective about them is not right. Savarkar was a great freedom fighter. Ignoring him and insulting him is not pardonable. He will always be great freedom fighter. Some people who have certain ideology raise questions on Savarkar. Twice he was sent to lifetime imprisonment by the British. He used to believe in discussion,” Singh said.