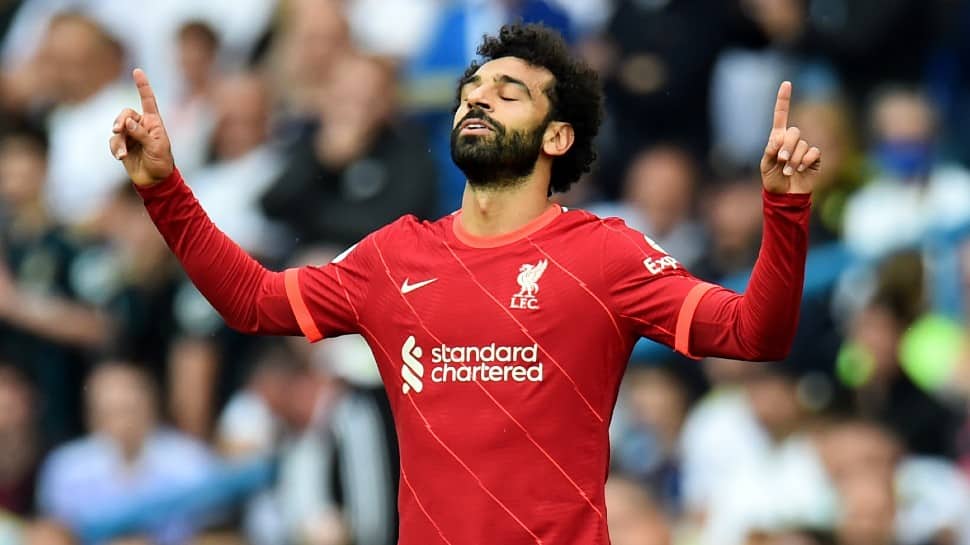 Mohamed Salah’s 100th Premier League goal helped Liverpool cruise to a 3-0 victory at 10-man Leeds United on Sunday (September 12) in a match that was marred by teenager Harvey Elliott suffering a dislocated ankle. After a lightning-fast start to the game, Salah became the 30th player to join the Premier League’s 100-goal club in the 20th minute, tapping home from close range from a Trent Alexander-Arnold cross.

The visitors missed a host of chances to make it 2-0 in the first half, before Fabinho made one count early in the second period to put Juergen Klopp’s side on course for three points in West Yorkshire. There was a worrying sight later in the half as Elliott needed lengthy treatment on the pitch following a tackle from Leeds’ Pascal Struijk, with the hosts’ substitute shown a straight red card for the challenge by the referee.

Elliott was taken off on a stretcher, receiving applause from Leeds fans as he was taken down the touchline. “It is his ankle. I heard it was dislocated and they couldn`t put it back and he is now in hospital,” Liverpool manager Juergen Klopp said.

The 18-year-old posted on his Instagram before the match finished: “Thank you for the messages guys! Road to recovery. YNWA (You’ll Never Walk Alone).”

Liverpool regained their composure to add a stoppage-time third through Sadio Mane to put the seal on a victory that moved them above Manchester City into third in the standings, while Leeds sit 17th without a win from four league matches this season.

“We were not in charge very often in the game,” Leeds coach Marcelo Bielsa told Sky Sports. “They were superior to us in all aspects.”

Liverpool’s away form has been impressive – they had won seven and drawn once in their last eight league games on the road before the trip to Elland Road, and showed no fear in going toe-to-toe with Leeds’ high-octane style in a raucous atmosphere on Sunday.

The goal that broke the deadlock came via a familiar source, as Salah was alert to Alexander-Arnold’s pullback to become the fifth fastest player in Premier League history to reach a century of goals, reaching the milestone from 162 appearances for Liverpool and Chelsea combined. Liverpool were in the ascendancy after their opener, and should have quickly made it two, but Mane could only balloon his effort over the top from close range.

The goal that put the game to bed for Liverpool came after another Alexander-Arnold cross, this time from a corner, with Brazilian Fabinho firing home the loose ball. Elliott, who has impressed this season since being promoted to the first-team fold by Klopp, was then left in serious pain having been caught by Struijk’s trailing leg.

Struijk was sent off by referee Craig Pawson and the decision was confirmed by the VAR before the red card was shown.

Mane’s frustrating afternoon in front of goal continued as chance after chance came and went, before he finally put one away in stoppage-time to put the icing on the cake and make it 10 points from 12 so far this season for Liverpool, as Klopp`s side stretched their unbeaten Premier League run to 14.