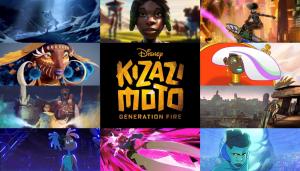 I am absolutely honored to be part of this great series, as for the first time in history, we have an animated Disney series that is highlighting our rich Egyptian & African culture.”

ORLANDO , FLORIDA, USA, November 29, 2022 /EINPresswire.com/ — Mo Ismail is a multi-talented global star originally hailing from Egypt. With his herculean looks and deep voice, he has not only captivated the audience with his acting prowess, but his baritone is the voice of a character featured in the animation series. Mo has forayed into acting in several industries and has been produced and directed various music videos. He also has lent his voice to various animation series. This multi-talented actor happens to own it all.

As a great actor, he has performed so many amazing roles in front of the camera. However, behind it, his voice has mesmerized many with his characteristic tone and accent. He happens to hold the distinction of being the first Egyptian actor to have ever voiced a Disney character for an animation series. This upcoming series by Disney is named “Kizazi Moto: Generation Fire” and will release in the current year, 2022. Viewers will get to check it out on Disney+ with great use of technology for an action-packed story plot that has much more twists and turns to watch out for.

This animation series happens to be a massive landmark for Disney and the first to highlight the African continent’s culture. It delves into the rich cultural heritage, diverse traditions, and stories of a land yet to be fully explored and known by people outside it. A whole new concept of African tales hasn’t had many representations in the animation world yet. This new animation series, which will do just that with a voice from Africa lending his voice to the character to make it as authentic as possible, is the thought process that the production house worked on.

The stories are based in various parts of the African continent with a wonderful mix of rich culture, history and a look into its future. Each character is portrayed with a fantastic tech-backed vision that illustrates aliens, monsters, and spirits, stunningly depicted from an African perspective. Plenty of action and fantasy is woven into the stories to bring to life and capture the great continent in its full glory. The audience gets to explore Africa like never before while delving into the cultural and historical aspects that have become folklore. Using innovative animation techniques, the viewers are in for some amazing entertainment as they delve into the diverse and expansive nature of the different histories embedded across the regions.

Mo Ismail feels fortunate to be part of this project because he always believes his roots and culture have so much to give to the world. Lending his voice is a privilege, and working in such a big production house also is a dream come true for the actor who has previously got to lend his voice for other animation series.

“ I am absolutely honored to be part of this great series, as for the first time in history, we have an animated Disney series that is highlighting our rich Egyptian & African culture. These are the kind of projects that inspire new generations, and unlock more creativity within the field” – Mo Ismail

He wants to be part of such projects in the future and inspire generations to come. However, this time he was all the more motivated to take up this project as it concerned Africa and showcasing it to the world was even more important, with his voice being a part of this project and sending the message across to the globe.

Share
Facebook
Twitter
WhatsApp
Previous article
JULIANA AND THE AUTOBIOGRAPHY OF PAIN: A STORY OF HOPE
Next article
The L. Ron Hubbard Theatre Celebrates as the Green Room for the 90th Anniversary of the Hollywood Christmas Parade
RELATED ARTICLES
EIN Presswire