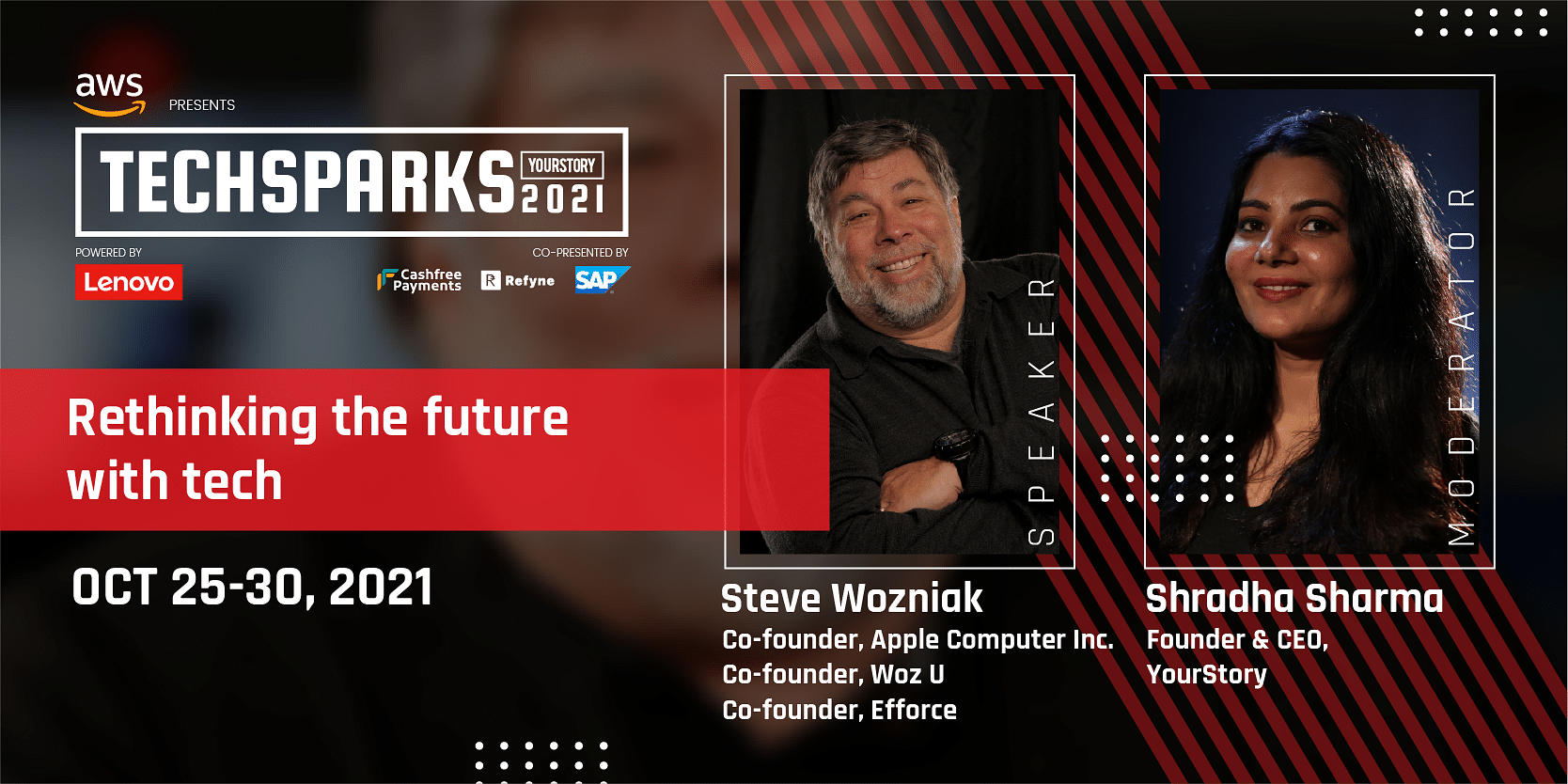 If there’s any last word in technology, it has to be Steve Wozniak’s. The voice of a person who is credited for single-handedly designing the first personal computer for humankind can only be resounding and reassuring amid the paradigm shift in systems and institutions induced by the COVID-19 pandemic.

The journey of a ‘computer geek’ who went on to become a ‘cult icon’ has no parallel in the history of modern technology. An inspiration to millions, Steve’s story serves as a role model for budding entrepreneurs and technology disruptors of tomorrow.

At TechSparks – YourStory’s flagship event and India’s most influential technology, innovation, and leadership summit – which will return virtually for its 13th edition – TechSparks 2021, Steve is set to break the bubble of future-ready tech.

“I am Steve Wozniak and I will be speaking at YourStory’s flagship startup tech conference TechSparks 2021. Since 2008, founder Shradha Sharma and YourStory have played a crucial role in enabling the Indian entrepreneurial system. The YourStory team has consistently celebrated the stories of innovators, changemakers and disruptors doing so at a time when startups were rarely celebrated or even heard of in India,” Steve shared a message via a video byte.

As TechSparks 2021 sets what’s next as its global agenda, expect global leaders, technology startups, enterprises and ecosystem stakeholders to share their learnings and vision about rethinking the future through disruptive technologies and innovative solutions.

“Today, it is only right that YourStory is again leading the charge in finding what’s next by bringing together the leaders at the forefront of disruption. Join us at TechSparks 2021 for the most defining conversations on rethinking the future in a post-pandemic world,” Steve added.

A Silicon Valley icon, technology entrepreneur and philanthropist for more than 40 years, Steve was instrumental in shaping the industry with his design of Apple’s first line of products. Steve also influenced the popular Macintosh.

The Apple II was integral in launching the personal computer industry. He is listed as the sole inventor of four Apple patents.

In 2000, Steve was inducted into the Inventors Hall of Fame, and was awarded the prestigious Heinz Award for Technology, The Economy and Employment for “single-handedly designing the first personal computer, and redirected his lifelong passion for mathematics and electronics towards lighting the fires of excitement for education in grade school students and their teachers.”

That’s not all. Steve founded the company Unuson, an abbreviation of “unite us in song”, which sponsored US Festivals in 1982 and 1983. Initially intended to celebrate evolving technologies, the festivals ended up as a ‘technology exposition and a rock festival’ , intersecting music, computers, and culture.

In 2017, Steve co-founded Woz U — a postsecondary education and training platform focused on software engineering and technology development. He has also recently co-founded Efforce — which leverages disparate applications of blockchain technology.

A big reveal at TechSparks 2021, in an exclusive interaction with YourStory founder and CEO Shradha Sharma, the author of iWoz: From Computer Geek to Cult Icon (Norton Publishing), his New York Times best-selling autobiography, Steve will kickstart India’s largest all-virtual startup-tech conference and share his all-encompassing vision for rethinking the future of everything in a post-pandemic world.

(With inputs from the official bio of Steve Wozniak updated on 09/09/2020 as published in woz.org)