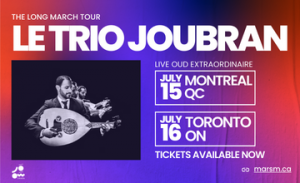 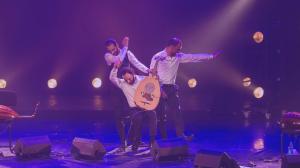 Through their mesmerizing songs, they attempt to honour the struggles and oppression of indigenous peoples around the world.

3 brothers, 3 ouds, 3 of the most original musicians in the Arab world. Oud masters Le Trio Joubran are set to captivate Canadian audiences this week.

MARSM Canada, a sister company of the internationally recognized events producer MARSM UK, has launched with an artistic programme in North America. First established in 2015, MARSM UK has been celebrating emerging and alternative Arab artists and musicians through live concerts, cultural events and exhibitions across the UK and beyond. Since its founding, MARSM aims to challenge the mainstream representation and support artists from Southwest Asia and North Africa (SWANA) and their diasporas.

“We strongly believe in the message that MARSM aims to deliver through the work it’s been doing over the past several years and we thought about how we can do the same in cities across Canada. That’s when we decided to merge our forces and expand the showcase of Arab music and arts. We want to give artists a platform to perform and show their work in a place that is hungry to connect with them,” said Naji Rizeq, Co-founder of MARSM Canada.

MARSM Canada’s outstanding debut in May was with Palestinian stand-up comedian Alaa Abu Diab, with five sold-out shows across Ottawa, Montreal, Toronto and London, Ontario. This was Abu Diab’s Canadian debut after his hilarious show Lockdown had a successful European run in Paris, London, Athens among others.

This month, MARSM is bringing world-renowned musicians Le Trio Joubran to Montreal and Toronto. The three Palestinian brothers from Nazareth, Samir, Wissam and Adnan, who have been touring the world with their ouds for the past 20 years, will play the best of their music, at Montreal’s remarkable L’Olympia on July 15 and at Toronto’s legendary Massey Hall on July 16. The group’s new album The Long March features collaborations with Roger Waters and poet Mahmoud Darwish.

“There is no power like that of art in not just bringing people together, but also bridging between diverse cultures. Alaa Abu Diab’s show was absolutely phenomenal and the energy from the audiences was contagious. Now, we are excited about bringing world-class Arab artists like Le Trio Joubran to two of the most beautiful and prestigious venues in our cities,” said Dina Al-Wer, Co-founder of MARSM Canada.

MARSM Canada plans to unveil more artists and its team promises an exceptional line-up before the end of the year.