Local Train Services Affected In Mumbai Due To Heavy Rainfall 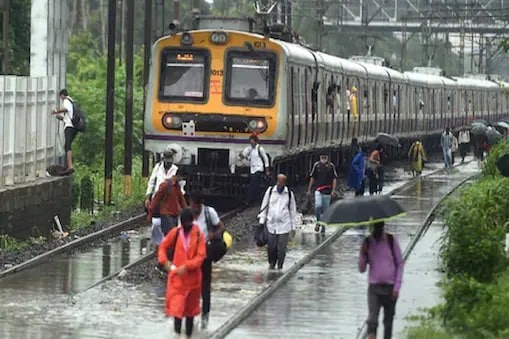 Mumbai has been witnessing intermittent rain since the last few days.

The suburban train services have been affected in Mumbai as the rainfall continued in the capital city of Maharashtra since Thursday morning. Mumbai has been witnessing intermittent rain since the last few days. Western Railway informed that all suburban (local) trains are running late by 10-15 minutes due to point failure at Churchgate station amid rainfall. It also regretted the inconvenience caused to the passengers. Train services at various railway stations have been impacted due to waterlogging near platforms and tracks at the stations.

Earlier, a railway spokesperson said that due to waterlogging between Umbermali and Kasara stations in Thane district, train service was suspended between Khardi and Igatpuri stations of Central Railway from Wednesday night onwards.

Central Railway Chief Spokesperson Shivaji Sutar said that the timings of Pune-Darbhanga Special and CSMT-Varanasi Special had to be changed due to situations caused at various stations amid rainfall.

Kasara received 207 mm of rainfall from Tuesday night till 10 pm on Wednesday. Brihanmumbai Municipal Corporation (BMC) officials said that within ten hours after 8 am on Wednesday, Mumbai received 68.72 mm of rainfall, while the eastern and western suburbs recorded 58.75 mm and 58.24 mm of rainfall respectively. The rain had subsided in the afternoon but intensified again in the night on Wednesday.

The India Meteorological Department (IMD) had issued a ‘Red Alert’ for Mumbai on Wednesday. The predictions came true as Mumbai recorded heavy to very heavy rainfall in many areas.

The vehicular traffic was also affected due to rainfall in Mumbai. The commuters faced problems due to waterlogging at several places on the main roads of the city.

“Don’t get sick”: Indonesia’s poor miss out on COVID care