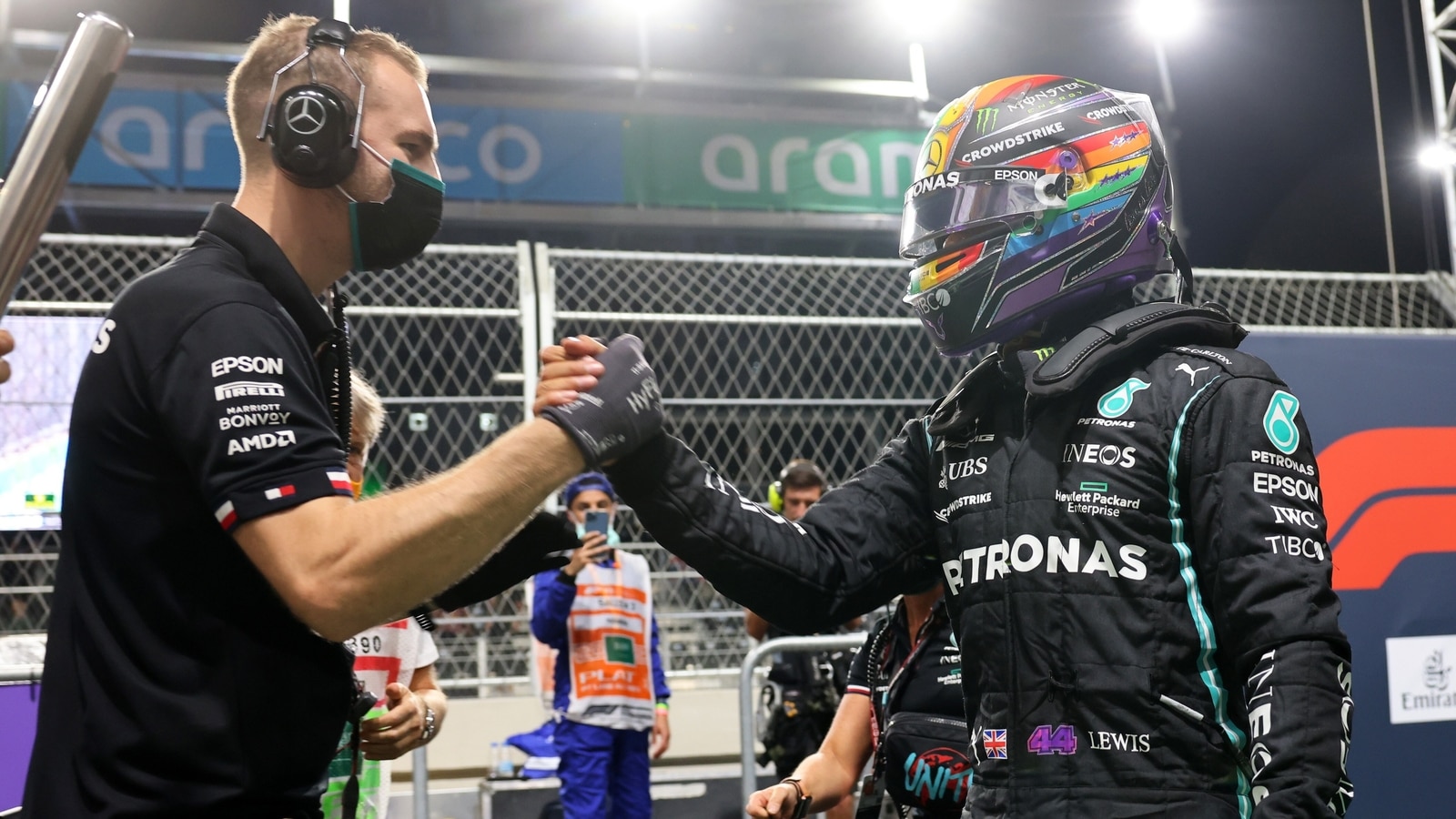 Lewis Hamilton boosted his bid for a record eighth Formula One title by taking pole position at the first Saudi Arabian Grand Prix on Saturday as Red Bull rival Max Verstappen crashed at the last corner on his final qualifying lap.

Hamilton, eight points behind the Dutchman with two races to go, was joined on the front row by Mercedes team mate Valtteri Bottas after the floodlit session on the super-fast Jeddah Corniche street circuit.

Verstappen must finish at least second in the night race to have a chance of taking the title on Sunday.

While the 24-year-old qualified third, there were immediate concerns about the state of his car’s gearbox and the possibility of a five-place grid penalty which would be triggered by any change.

“That was looking like the lap of the year,” said Red Bull boss Christian Horner of Verstappen’s last-gasp effort until the moment of impact.

“It was a mighty, mighty lap. He was pulling something very special out of the bag.”

Verstappen, who had been trying to beat Hamilton’s time of one minute 27.511 seconds and had earlier brushed the wall at turn one without consequences, said it was a “terrible” end to the session.

His car slid wide after he braked late for turn 27, went across the track and his right rear hit the barrier. He had been some two-tenths of a second inside Hamilton’s time through the first two sectors.

“I knew the pace was there and it showed at the end. I don’t really understand what happened but I locked up. I still tried to keep the car on track and keep going but clipped the rear and had to stop,” he said.

Seven-times world champion Hamilton, chasing a hat-trick of wins after victories in Brazil and Qatar that narrowed the gap to his 24-year-old rival, was delighted to be leading a front-row lockout.

“For us to get a one-two, I’m really proud of Valtteri and the men and women in our team who have just been working so hard. This is a great result,” said the Briton after the latest twist in a roller-coaster season of fluctuating fortunes.

The pole was the 103rd of Hamilton’s stellar career and fifth of the season and set him up for a record-extending 103rd win.

Mercedes are five points clear of Red Bull in the constructors’ standings.

Frenchman Gasly was later given an official warning for impeding Ferrari’s Carlos Sainz.

Hamilton started the session with the stewards still considering possible action against him after the champion was summoned for allegedly failing to respect warning flags and impeding Haas driver Nikita Mazepin in final practice.

Sainz qualified only 15th after damaging his car’s rear wing end-plate in a spin and brush with the wall that he managed to save from becoming something more serious.

With no time to fix the damage, the Spaniard tried again to reach the top 10 but complained over the radio that the car was ‘undriveable’.