Ken Tingley's Back for More

Ken Tingley has been on the front lines of community journalism for over four decades. First as a sportswriter, later as a sports editor, and finally as editor of The Post-Star in Glens Falls, N.Y. 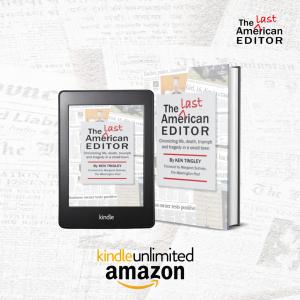 For many years, Tingley has fostered what small newspapers — at their best — stand for: their tight-knit connection to the community, their focus on people, and their indelible sense of place.”

BROOKLYN, WISCONSIN, UNITED STATES, July 28, 2022 /EINPresswire.com/ — After forty years in the world of Journalism, Ken Tingley is not slowing down.

Tingley, who served multiple roles in the newspaper industry as a renowned columnist and writer, along with a 21-year tenure as editor of The Post-Star in Glens Falls, New York, announced his retirement in 2020.

News of the departure from the publication of this cornerstone figure in the Glens Falls community caused such an impact that the city proclaimed July 17th of that year as “Ken Tingley Day” in a rare and deserving nod to the work that reporters and editors do that mirrors Tingley’s own love for local newspapers and regional journalism.

“Over my 40 years in the newspaper business, I marveled at our ability to put together a completely new product every day that included news, analysis, opinion, and entertainment,” Tingley wrote. “We provided valuable news about who was born, died, and what there was to do over the weekend. The men and women who wrote and edited those stories often worked long hours and were dedicated to getting the story right. And what made me most proud was the ability to tackle in-depth, complicated issues about our own community.”

This deep appreciation for his profession is best-exemplified in Tingley’s first book, a collection of his columns titled “The Last American Editor” released by Something Or Other Publishing that go to the heart and soul of what newspapers contribute to their environment, as he experienced firsthand during his time with The Post-Star in Glens Falls.

“If I were making an argument in court for the value of small newspapers, I would point, as Exhibit A, to Ken Tingley’s work at the Post-Star in Glens Falls, New York,” Washington Post Media Columnist Margaret Sullivan wrote in the foreword to Tingley’s book. “For many years, Tingley has fostered what small newspapers — at their best — stand for: their tight-knit connection to the community, their focus on people, and their indelible sense of place.”

After the release of “The Last American Editor,” Tingley moved forward and branched out to many different projects. Writing in his personal newsletter, “The Front Page,” he has called for the establishment of a National Newspaper Day to honor the role that local journalism plays in the everyday lives of small towns and cities all over the country.

In addition to this, he is currently gearing up for the release of his new book “The Last American Newspaper” later this year and will appear in one of Something Or Other Publishing’s upcoming Anthologies in the winter of 2022 with his piece “Roy McDonald: Profile in Courage,” a portrait of the conservative assemblyman and senator in the New York State Legislature who provided a key vote for the passing of the legislation that made same-sex marriage the law in New York.

If the last two years are a good indicator, fans of Tingley’s work can expect much more content in the coming years from his everlasting need to write.

“I once explained to one of my friends why I ‘had’ to write a column every week. I explained that if I didn’t, I might never write another one,” Tingley wrote in his Newsletter. “For some of us, it isn’t a matter of wanting to write, it is something that we have to do.”

Miguel Torrellas
Something Or Other Publishing
+1 213-952-9557
Marketing@soopllc.com