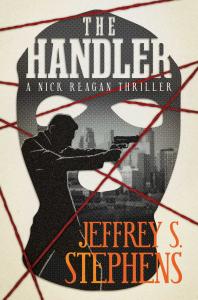 Many critics have noticed that my novels are unmistakably cinematic, and I want to see them adapted into films or mini-series.”

LOS ANGELES, CA, UNITED STATES, June 17, 2022 /EINPresswire.com/ — THE HANDLER, by Jeffrey S. Stephens, an espionage thriller presenting a cast of characters in the first of a new series, is being released in hardcover on August 30, 2022, by Post Hill Press. The eBook version will be available in early July.

Stephens states, “I returned to the genre of international espionage thrillers with The Handler. I feel at ease in that environment, and, based on my experience, believe in my ability to create credible, intriguing, page-turners. I’ve been writing for a long time and have been fortunate enough to have six prior novels published by some amazing publishers. Despite nearly unanimously positive reviews, some have sold better than others, and it was time for me to return to the place I started, with a realistic thriller.”

The Handler provides a multi-national setting, with CIA agents attempting to foil a terrorist plot aimed at causing death and destruction at several locations around the United States. The Handler will be available in bookstores as well as on Amazon and Barnes & Noble and is already available for pre-order.

Stephens says, “I’m determined to establish my brand and find an audience for The Handler, especially since I have two other completed novels I expect to have published. Furthermore, many critics have noticed that my novels have cinematic aspects, and I want to see them adapted into films or mini-series.”

A native of the Bronx, now living in Greenwich, Connecticut with his wife Nancy, where they raised their two sons, Graham and Trevor, Jeffrey S. Stephens is the author of the Jordan Sandor thrillers, Targets of Deception, Targets of Opportunity, Targets of Revenge, and Rogue Mission; the steamy murder-mystery Crimes and Passion; and the exciting father-son international saga Fool’s Errand which won the First Place Pencraft Award. Stephens has been a successful lawyer for decades, representing a number of celebrities and other notable clients who appear in his books under various guises.

Stephens and his family are avid skiers, golfers, and tennis players who have traveled extensively throughout the United States, Europe, Asia, and the Caribbean, including a fateful trip years ago to Portofino, Italy, the setting for the climax of his first novel, Targets of Deception.

Want Roadkill? There's an App for That! The “Roadkill Art” App!