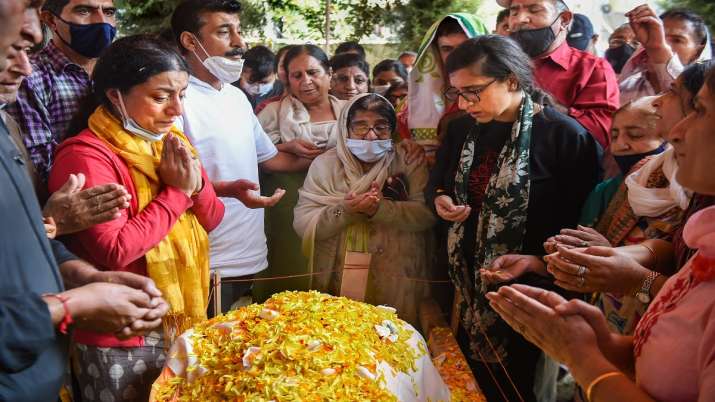 The sound of Vedic chants and ‘azaan’ from a nearby mosque fused in melodic harmony for a brief moment at the Bindroo residence where hundreds of mourners from every walk of life gathered on Wednesday to pay their respects to “humanist-businessman” Makhan Lal Bindroo who was gunned down by terrorists.

As the family prepared for the ritualistic last bath – Bindroo was killed at his pharmacy Bindroo Medicare on Tuesday evening — and the diverse chants were heard, his wife Kiran cried out in anguish. “Today, he is being sent off from this earth by Hindus as well as Muslims. He lived for humanity. He served you people… why was he killed? What is his fault?”

The chords of unity were a fitting last post for the businessman, a familiar face for those in Srinagar, many of the mourners said. There were few dry eyes in the large congregation from across the valley gathered at the Bindroo home in Indra Nagar to bid a final goodbye to the prominent Kashmiri Pandit, one of those who stayed back in the Valley through the years of turmoil and tension.

His daughter Shraddha Bindroo, however, was dry-eyed and fierce. “I will not shed tears,” said the young woman, a doctor who works as an associate professor at a Chandigarh hospital. She stood on a chair and shouted out to the killers, “Mein Makhan Lal Bindroo jee ki beti hoon. Unka shareer gaya hai aatma nahi (I am Makhan Lal Bindroo’s daughter and his body has only left Kashmir but his spirit of brotherhood will remain alive in this Valley.) Challenging her father’s killers, she said, “if you have the guts, then come have a debate with me. You won’t. You merely know how to hurl stones and open fire.”

The indomitable Shraddha, who also gave multiple media interviews about her father, said he started his business on a cycle and had helped her doctor brother and her to reach where they are today. Her mother, she said, sits at the shop and serves people.

The large crowd at her home agreed. The 68-year-old Makhan Lal, many said, stood for every person rich or poor during the last 31 years of the insurgency and provided medicines free of cost to the needy. His chain of shops was a trusted name for genuine medicines.

He had even brought his son back from a high paying job at the Medanta Hospital in Gurgaon to serve the people of Kashmir, a retired police officer recalled as he joined the queue of mourners to condole and condemn the death.

Minutes after Bindroo was shot at point blank range, allegedly by terrorists of The Resistance Front (TRF) at his pharmacy near Iqbal Park, militants gunned down a ‘chaat’ vendor, Virendra Paswan from Bihar elsewhere in the city. Almost simultaneously, another civilian, Mohammad Shafi Lone, was killed at Naidkhai in north Kashmir’s Bandipora district.

Bindroo’s wife Kiran said, “In our prayer room we have all religions together. My husband believed in one religion and that is humanity and nothing else.”

Abdullah, who was in tears as he hugged Siddharth, said, “Your father was a brave man. He stood against all odds and I am requesting you not to leave Kashmir like your father. God will Inshallah punish the culprits. It is unfortunate that the beast consumed him too.”

At one point, Abdullah lost his cool when pressed to give a political statement. “Is this the moment to ask stupid question? We have lost a wonderful human being and you have no value in emotions,” he said angrily as he waded through the crowds.

Siddharth, who could also barely hold back his tears, echoed him. “Please have some mercy. I have lost my father and am yet to come with terms with it. Please do not force me to make any statement”.

His father, he said, was a principled man who earned a name by selling genuine medicine.

“Respected by all in Kashmir for being helpful and friendly, he even motivated me to return and serve people here. I don’t know whether he had any threat. All I remember is that he was brave enough to keep his shop open since the 1990s,” the grieving son said.

Jammu and Kashmir Apni Party (JKAP) Altaf Bukhari also visited the Bindroo home to pay his condolences to the family. “Barbaric is too small a word to describe the incident. I had a long association with Bindroo saab and it is very unfortunate that he left us this way”.

From the house, the body was taken to the Karan Nagar crematorium where it was consigned to flames. The pyre was lit by Siddharth and Shraddha.

This is possibly the first time after the killing of noted human right activist H N Wanchoo in 1992, that people from across the valley gathered to mourn a death.