How focusing on change helped Piramal Group evolve and grow 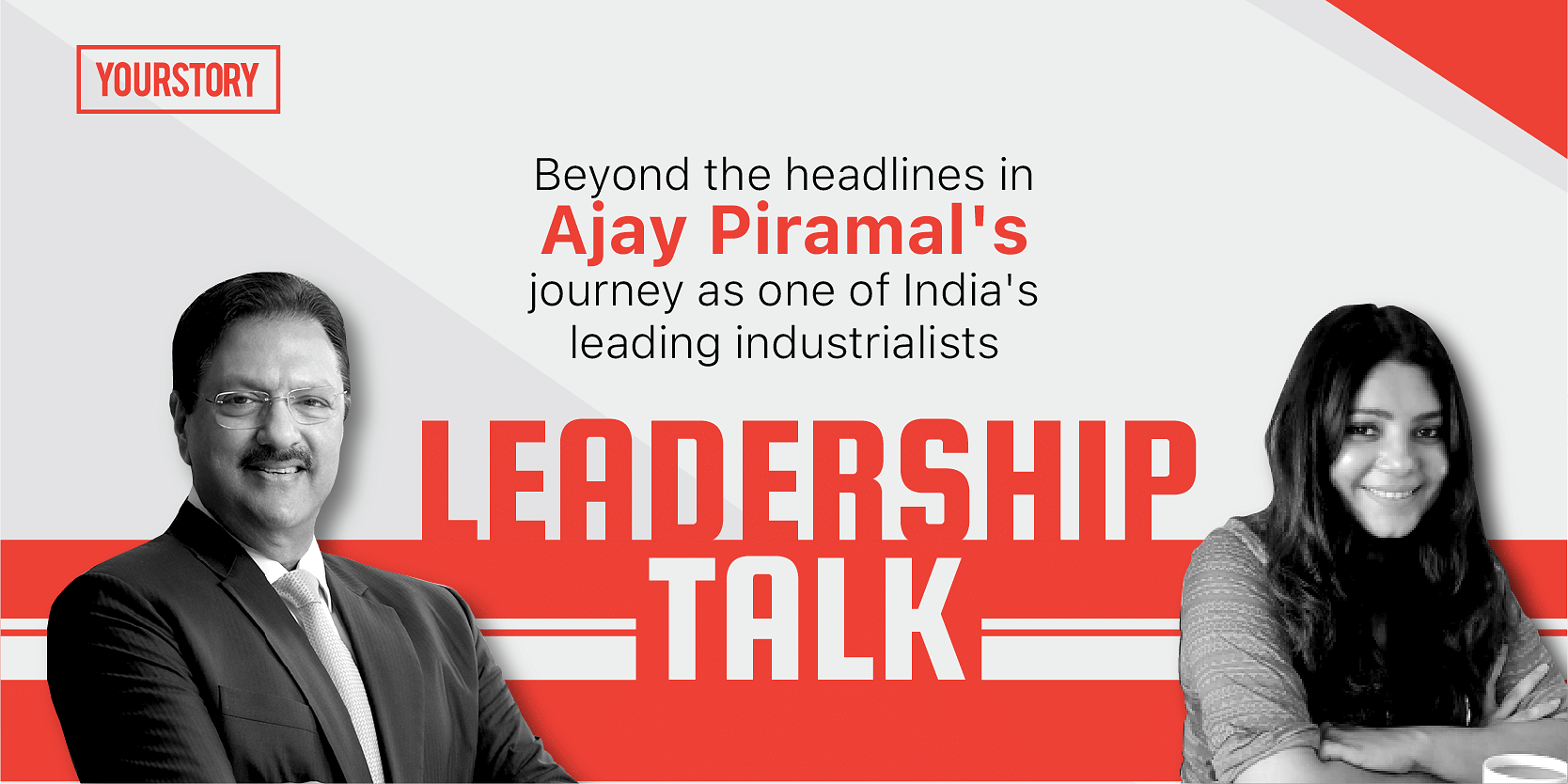 Change is the law of the universe. Nothing is permanent.

For Ajay Piramal, Chairman of Piramal Enterprises Limited, this profound teaching from The Bhagavad Gita is not only something to quote from but a philosophy to live his life by.

After having let go of the family textile business early on in his career and diversifying into pharmaceuticals and financial services, Ajay Piramal feels change is the only constant.

Piramal Enterprises Limited, one of India’s large diversified companies, has undergone several successful transformations and pivots in the last 32 years, through a series of M&As, joint ventures, organic growth, and alliances. It has been through a long and laborious journey, starting from textiles to pharmaceuticals, to the financial sector. Its profit for the latest quarter (June 30, 2021) stood at Rs 539.4 crore, up 8.85 percent from the same quarter a year ago.

In an exclusive interaction with YourStory CEO and Founder Shradha Sharma, Ajay Piramal says the company is constantly changing and adapting to stay ahead and that is one of the reasons it has been able to establish a brand that is looked at with respect.

“Building a brand is about values and purpose. Values create value in the long term,” he says. He points out that values in business are not just for their own sake. “Values make a lot of good economic sense as well.”

Citing an example of one of the group’s first acquisitions in the pharmaceutical space, Piramal says, “In the long term, because of the values, which at one time proved expensive because we had to spend in creating a new plant, forgo exports, we got value because we bought cheaper and sold higher.”

As someone who considers The Bhagavad Gita as the best management book that there is because of its practical life lessons, Piramal says it is in essence a lecture given by a mentor to a young mentee in the middle of the battlefield when the latter is having doubts about moving ahead. “Every day, we are in one or the other battlefield,” he remarks.

As someone who was thrust into the business at a very young age, Piramal says surrounding himself with people who are wise has made a difference.

“Nobody can make a decision for you. So you have to have a point of view. The way I developed a point of view is by meeting different people. I may not agree with all of them but I pick out different points from them that resonate with me.”

Having lost his father and elder brother in close succession, the then 29-year-old Piramal inherited a loss-making textile company. “At that time, I just took the job. That’s what I do. I didn’t think too much about it, just one day at a time. That’s the best way to do it. My father gave me the opportunity to grow,” he says.

At this stage in his life, as the next generation takes over the business, he wants to devote more time to making a difference in the world. And one way of doing that is by placing his bets on disruptive ideas brought in by new-age entrepreneurs.

He’s helping grow these ideas with his VC firm Montane Ventures, which was incorporated in 2016 to fund early-stage startups.

“The small venture fund is to look at new businesses. It’s an opportunity to keep in touch with what’s happening around. The world is moving so fast. Every day there is so much excitement and I am very optimistic,” he says.

‘Read beyond the headlines’

Learning from his mistakes to build one of the leading conglomerates in the country, Piramal advises entrepreneurs to “read beyond the headlines” while making important decisions.

Drawing from his personal experience, he says this philosophy came handy when the group sold its textile business and moved into pharmaceuticals by acquiring a multinational company, Nicholas, in 1988.

During that time, all multinationals in the pharma space did not consider India to be a great place for business. Indian companies, meanwhile, were not interested in acquiring multinationals owing to ‘high cost and limited growth’.

Keeping the negative narrative aside, the chairman went into the details, read beyond the headlines, and envisioned the growth potential in the pharma sector, mainly because the reach of modern medicine was limited at that time and it “had to grow” as the Indian economy was growing.

“The costs were high because the businesses were not being run well. Recognising that made the difference between decisions,” says Piramal.

During the 32 years of his career, his decision to enter the pharmaceutical industry has been the most satisfying as he reflects on his “overspeed” in the financial sector.

“To move from textiles into pharmaceuticals was a huge challenge. It is like chalk and cheese; they are 180 degrees apart. And then to build a good, valuable business is the most satisfying. We still have a good pharma business, which had actually gotten bigger than what it was when we sold it in 2010. This has been the most satisfying part of my journey,” he says.

Along with great decisions come the mistakes. One of them, Piramal says, was the ambition to grow too fast in the financial services industry.

“We went into the financial services sector and aimed to grow too fast. One has to be more conservative in lending, and our pace was too fast. Unfortunately, the circumstances around us and the environment changed significantly. So we had to go through some challenges,” he adds.

Having said that, one of the biggest opportunities in the industry today is financial services and the group is geared up to tap the same. Its most recent acquisition of Dewan Housing Finance Corporation (DHFL) reflects the company’s next big bold transformation from the existing model of real estate-focused wholesale lending business to a well-diversified financial service entity.

The main attraction of DHFL for the Group is the scale of its operations and branch network, which the latter hopes to use to build its retail lending book.

“Even in one of the largest cities like Mumbai, people rely on money lenders and pay exorbitant rates of interest. A lot of money is paid by them just to get their life going. It is important to get debt but at the right time and at a reasonable cost for the economy to prosper. We see a huge opportunity there,” he says.

Ruminating on some of the biggest challenges, Piramal says bad debts take place in fits and starts, and one has to manoeuvre around the same to resolve them.

“One has to go through a lot of learning. You need to look at risk on one side and growth and profitability on the other, and find a balance. That’s the whole challenge, not just in India but all across the globe,” the industrialist says.

COVID-19 and making a difference

Continuing with the challenges faced by the country, Piramal feels more optimistic about India’s future than he was last year, when the COVID-19 pandemic first hit the country.

“Given the constraints that we have as a country, we have done well. Last year, there was a lot of stress about migrant labourers. In the second phase, the stress hovered around hospital beds and the lack of oxygen. But by and large, we got over the problems and have been able to contain the COVID-19 spread better than most countries,” he says.

One of India Inc’s leading voices, Piramal is in no mood to relax but aims to focus more on “making a difference” through the philanthropic arm of the Piramal Group—Piramal Foundation.

The foundation is working with 22 state governments in areas like healthcare, access to drinking water, education, and youth leadership, and claims to have touched the lives of 200 million people.

“We are now working in India’s tribal districts to have a collaborative on tribal health. We are working with 112 aspirational districts as identified by the Prime Minister, which are the most backward but are aspirational,” he says.

As the next generation picks up the baton and shoulders more responsibility, the philanthropist wants to lay more focus on social entrepreneurship.

“I do not want to relax. But maybe over time, as the next generation takes more and more responsibility, I would like to do less business and move towards making a difference in the world and whatever little I can do,” Piramael says as he shares the “idea of detachment” from The Bhagavad Gita.

Don’t get attached to anything, because everything changes.