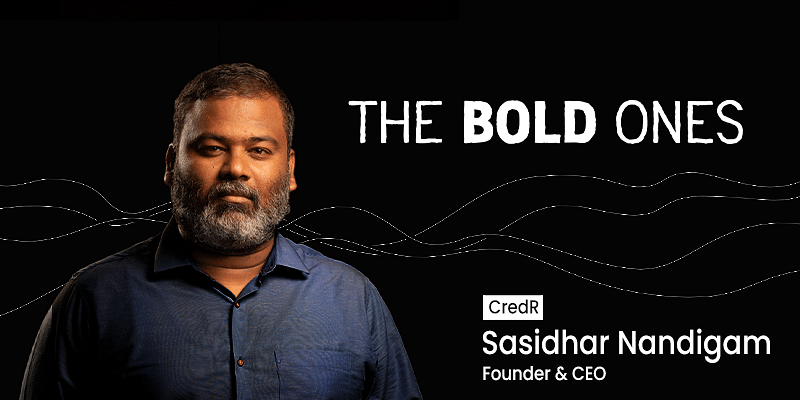 An unpleasant personal experience of buying a second-hand bike led Sasidhar Nandigam and Nikhil Jain to embark upon a journey of building a startup that works towards formalising the fragmented used two-wheeler industry.

“How do we make personal mobility reasonable and cost effective?” was the question that fired up the passion in Sasidhar Nandigam, Co-founder and CEO, CredR to stand out of the crowd and try something new.

Sasidhar is among the entrepreneurs whose stories are captured in Omidyar Network India’s newly launched video series titled ‘The Bold Ones – Innovating for the Next Half Billion’. A compilation of 11 short videos, the series captures power-packed stories of entrepreneurs who are building for the 500 million-plus Indians coming online for the first time via their mobile phones, a segment often referred to as the ‘Next Half Billion’ or NHB.

“A lot of people who have migrated to the big cities have to still use the public transportation options that are old [and not upgraded] which fundamentally means that the new generation of consumers have no option to move from one place to another in a very timely manner,” says Sasidhar in the video.

Solving for the “trust deficit in the minds of the consumers who want to buy and sell used two-wheelers”, CredR uses an online to offline distribution approach and focuses on providing good quality, affordable, and warranty-enabled vehicles to those who might be on a tight budget or do not have the means to invest in a brand new vehicle.

“We are not building a company here. We are fundamentally building a mission statement where we want to make sure that the average Indian person in the country should have access to personal mobility,” says Sasidhar while elaborating on his startup’s aim to offer independence and ease of travel through the medium of used motorcycles.

“During the COVID-19 induced lockdown in the country, migrant workers in many cities were coming online and buying used two-wheelers. The lack of public transportation led these people to buy [these used vehicles] to go back to their hometown,” says Sasidhar while talking about the upswing in demand during and after the pandemic lockdowns.

As people have started going back to work and business, the platform has witnessed increased demand from smaller towns, including Ghaziabad and Manesar in the north. Sasidhar points out that pandemic has caused a significant shift in consumer behaviour when it comes to mobility. Consumers today are looking for low-cost private mobility to feel safer, and the pre-owned two-wheeler market stands to benefit as customers are seeking cost-effective solutions from organised, trustworthy platforms.

Since its inception in 2015, CredR has served more than 1,20,000 clients, achieving a customer satisfaction score of 4.7 out of 5 in significant serving areas such as quality, good deal, transaction, service, and support.

Marching forward with the mission of becoming India’s largest and most trusted used two-wheeler brand, CredR is gearing up to open and operate over 200 showrooms in India by 2023.

The personal and professional challenges and success Sasidhar has faced while building his startup can be seen here.

The 11-part series is live on theboldones.in. Additionally, the series is also available on Omidyar Network India’s YouTube channel and social media handles.