Jojo in Usama Ishtay for AMAs 2021 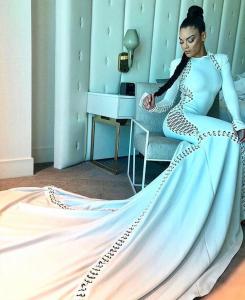 His new collection will be vibrant with a sensual modern vibe.

Usama Ishtay, a fashion specialist and A-List celebrity designer, has been featured in a variety of prestigious fashion publications, including Vogue, Harper’s Bazaar, Cosmopolitan, People, Marie Claire, and Hola!

From his humble beginnings as an Uber driver, he has worked his way up to become a recognized brand for celebrities such as Tyra Banks, Carrie Underwood, Anitta, Saweetie, Thalia, Karol G, and Nikita Dragun.

You may have seen his work on the hottest red-carpet awards, like the recent 2021 AMAs, where he dressed the superstar Jojo in a breathtaking crystal encrusted chainmail garment.

His life story has served as an inspiration to several others. Ishtay began his career as an Uber driver, driving for 12 hours per day. His first venture into the fashion sector was owner of a women’s clothes store in his hometown.

Born in Venezuela, but raised by a Syrian immigrant family, he subsequently began traveling to Los Angeles many times a year to purchase and transport products for his own land.

“Making clothes is an art. It has been my dream. Every new project has a story and inspires me to do better in the future. My decision to leave my job as an engineer and geologist has proved to be a life changing decision and each second, I feel grateful for that decision,” Ishtay said to the media.

Many say Usama Ishtay is a role model and exemplifies what it means to work hard. His peers admire him for his dedication to his profession and the industry. From his arrival in Los Angeles to confronting the realities of life, he has risen to every occasion.

“It’s not always easy, especially in the beginning. I had to save every penny. Sometimes I would see myself working 36 hours non-stop between Uber and my first product line,” said Ishtay.

His first accomplishment was dressing up Eve for an Autism Speaks event. This was a watershed moment in his development, and there was no turning back. To know more about the Usama Ishtay collection, you can visit his website or follow him on instagram.

A woman’s clothes boutique was his first foray into the fashion sector, since he travelled to LA many times a year for business. Later, he made the decision to relocate to Los Angeles in order to pursue a career in fashion design and began working on his first clothing line. Accomplished success in the field.

Having dressed the rapper Eve for an Autism Speaks event after his debut collection, he was later on able to dress Tyra Banks, Carrie Underwood, Thalia, Anitta, Saweetie, Lauren Jauregui, Nikita Dragun and many more.

His next collection and fashion show will be launched in March 2022 with a bright and sensual modern twist.

For further information or to schedule an interview contact Francis Cardenas at 805-738-8119 or media@usamaishtay.com.