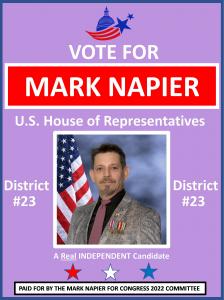 Intelligence Community and Many in Congress Refuse to Enforce Wartime Suspension of Limitations Act, No FEAR Act and Whistleblower Protections Act

Justice needs not only to be done…but seen done.”

FORT LAUDERDALE, FLORIDA, UNITED STATES, June 20, 2022 /EINPresswire.com/ — Mark Napier who recently qualified to run for office in Florida’s District #23 congressional race as a ‘real’ Independent candidate is campaigning to represent not just the middle class, but the ‘Discarded and Forgotten’–low-income, impoverished, and homeless. Napier served both the Central Intelligence Agency, the U.S. Army and experienced chronic homelessness all because he took a stand in reporting Child Pornography as a CIA Whistleblower.

Napier says…“It is the Whistleblowers who often serve as the ‘lynch-pin‘ disclosing egregious acts of wrongdoing where U.S. Agencies, Departments and Congress have failed.” It was Lord Chief Justice Hewart (1924) who said …”Justice needs not only to be done…but seen done.” Hence, more protection is needed and accountability.

Apparently, some CIA associates have never been prosecuted for such crimes, per December 2021 article: “After Years of Silence, CIA Officers Are Exposed for Child Sexual Abuse.” None of the FOIA cases reportedly disclosed by the CIA included Napier’s reported incident from August 2005, suggesting the CIA is not in full compliance to honoring the ruling by the U.S. District Court for the District of Columbia.

Napier’s last four years at the CIA were as an independent contractor in the war zones of Iraq, but mostly Afghanistan. Napier says he has more than just a few war stories to tell like the time…”three Navy S.E.A.L. snipers could not hit water, if they fell out of a boat in the middle of the Atlantic.” Well in 2005, at an overseas CIA Station in Iraq, Napier says…”I witnessed first-hand a mismanaged investigation of Child Pornography that led to the wrong individual being expelled from country and yet, the offender–who had a previous history–was coddled.”

When all others wanted to simply slide their mistake under the rug, Napier remembered a 1990 quote from the fictional character ‘Captain Jean-Luc Picard’ of Star Trek the Next Generation…”There are times, sir, when men of good conscience cannot blindly follow orders.” In 1987, the same advice was instilled upon Napier when commissioned as officer in the U.S. Army. Napier’s military values played a major role in his actions to report the wrongdoing. For Napier’s efforts he was left homeless during the Great Recession in 2009 and attempts to contest the ‘duped’ CIA were met with silence.

Retaliations were so arcane that in 2015, former CIA Director John Brennan’s reorganization and leadership training was “designed to make its leadership more accountable” among other issues being addressed, see “CIA’s Brennan to overhaul spy agency’s management structure,” Ken Dilanian, 6 March 2015 (1). No doubt part of Brennan’s actions were in response to a publicly embarrassing hostile work environment that was disclosed inside the Agency’s Counterterrorism Center, see “CIA Suspends Chief of Iran Operations Over Workplace Issues,” Ken Dilanian, 16 March 2014 (2) and “CIA Cracks Down on Bullying & harassment,” Our Bully pulpit, 17 June 2014 (3).

As Napier’s YouTube campaign video reflects (4)…“At the CIA when ‘THEY’ are in error, ‘THEY’ can get very political. In 2005, I made an attempt to correct one of the ‘THEIR’ mistakes that resulted in the system being focused on me…to silence me.” Napier says…”Abuse of title, position and authority by senior Agency officials have been reported in open source the last two decades, see “CIA is Losing its Best and Brightest and Not Just Because of Trump,” Just Security, Matt Castelli, 2 December 2020 (5) and “Bad Management Drives Talent from CIA, Internal Reports Suggest,” Los Angeles Times, Ken Dilanian, 29 July 2013 (6).”

With that said, Whistleblowers need more protection. Unfortunately, according to Napier…“The Wartime Suspension of Limitations Act (WSLA), the No FEAR Act (NFA) and the Whistleblower Protections Act (WPA as amended) are nothing more than window dressing to be enforced when the ‘Powers that Be’ see it to their political advantage; while ignoring the personal liberties, freedom and even Due Process that should be entitled.” That is why Napier would push for more significant Whistleblower protections, including accountability with teeth [criminal, civil and budgetary]. Napier suggests the following legislative efforts would be pursued by him based on lessons learned:

• Whistleblowers [employees and contractors] would be afforded “Due Process” to enable proper adjudication to flush out retaliatory efforts involving abuse of title, position and authority.

• Qualified and experienced attorneys would be furnished and paid for by and independent of the government to ensure Civil Rights and Liberties are protected.

• A means to ‘securely’ transmit Top Secret information (outside the purview of the Intelligence Community) in support of a Whistleblower’s case to Congressional committees, the DNI, the offending Intelligence Community element, or Congressional representatives is needed due to hardships, time, geography, or loss of access to the facility. Currently, Confidential and Secret information can be sent via U.S. Postal Service.

• Whistleblowers should be afforded the opportunity to solicit the media’s assistance as a “vehicle of conveyance” or as an intermediary to address issues when all avenues (email, phone calls, faxes, and correspondences) to reach the “Powers that Be” are exhausted or ignored after 90 days. Operational security is a must, but the media can be used to flag an issue.

• An advocate from Social Services needs to be available to assist the Whistleblower during a period in which they will go through troubled times (severe stress, PTSD, depression). Retaliations can lead to financial hardships resulting in the need for Section 8 Housing, food pantries, financial advisors, wellness center, public transportation and estate planning/bankruptcy.

• Government officials and their respective elements will be subjected to criminal, civil and budgetary penalties when the WSLA, NFA, and WPA are not enforced to include elements and parties within Congressional Committees who ignore their obligations to enforce compliance.

Napier believes the steps outlined will further ‘shield’ Whistleblowers from retaliation and hold government officials’ feet to the fire. Failure to enforce laws will only serve to deter Whistleblowers from stepping forward, if they ‘lack a parachute’ to take the dive.

Want Roadkill? There's an App for That! The “Roadkill Art” App!