AZTRO: The Language of Signs “TAURUS” 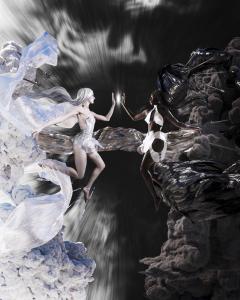 AZTRO: The Language of Signs “Gemini” 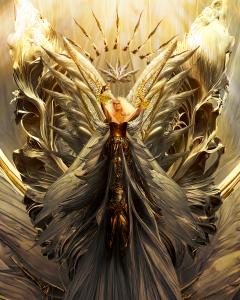 AZTRO: The Language of Signs “LIBRA” 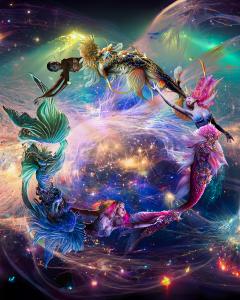 AZTRO: The Language of Signs “PISCES” 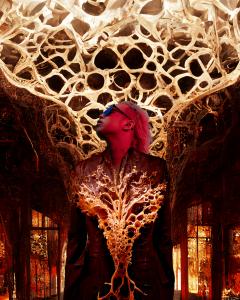 How would a Reinhardt Kenneth piece feel like if it existed as an NFT, a question only Reinhardt himself could
answer.

Reinhardt Kenneth is an Indonesian Fashion and Celebrity Photographer based in Los Angeles, CA. Acclaimed for his ability to mix high fashion, surrealism, and social awareness; he has shot for some of the biggest fashion and art publications and platforms in the world ; such as Harper’s Bazaar, Vogue, Elle, GQ, Marie Claire, The Louvre, Art
Basel Miami, just to name a few.

As Reinhardt debuts his very first NFT collection ‘AZTRO: The Language of Signs’ – he wanted the collection to feel authentically his yet elevated with elements of modern technology – Instead of stock photography, the worlds created around the muses are now obtained through 3D and generative art (AI) in collaboration with Adam Vlux and Kevin Abanto.

“What’s your sign” gets thrown around more than “What’s your favorite color” we are in the age of girls breaking up with their boyfriends because their zodiacs aren’t compatible, astrology has a cult following and Reinhardt has been able to tap into that and create transcendent pieces of art.

Hearing the background of how the AI pieces were brought to life left me speechless as Reinhardt explained how he has insane visions in his dreams, something you can’t just find and license in stock photography. Reinhardt wanted to create something he says that “feels so hyper realistic and surreal but in the same way not quite there, it’s my world, it’s my vision if it was visualized by AI”

Reinhardt had met NFT artist Adam Vlux in Denver on an “after party at a grocery store” thrown by Metanoise & Futureshape 360 a few months prior. They both instantly loved each other’s works, so it only felt right for Reinhardt to collaborate with Adam on a few pieces. Adam created “worlds” through 3D art for a select three pieces from the collection: GEMINI, AQUARIUS, and SCORPIO.

Apart from Adam, Reinhardt also collaborated on bringing his visions to life with Kevin Abanto – Reinhardt went on to say “Kevin and I never got on the phone to converse, due to a language barrier it is purely over text”. Interestingly, though, the text-exclusive conversations actually worked better. Reinhardt would describe a vision of his and Kevin would translate that into AI – in 30 minutes Kevin would have developed hundreds of AI generated scenes, something truly out of this world. What’s magical and fascinating is through NFT’s we get to witness the inside of Reinhardt’s mind at another elevation.

I had to ask Reinhardt what his AZTRO sign is, his sun is in Taurus – and he knew he had to bring extra justice to the NFT for his sun sign. “I was getting so frustrated and had a caffeine crash which led to a 30-minute power nap. In my dream I saw a sacred mother root in a land that was so barren and deserted but then it ascend to the sky and made a portal engulfed in a swarm of light, butterflies came flying out of it.” To elaborate, Reinhardt says “what’s so powerful about AI is you can create what you see in your vision, you can bring your visions to reality – it doesn’t
get any better than that. My mind is AI-compatible”

We are floating on a speck of dust in endless space and it is truly inspiring to see fellow creatives dream big and follow their inner passions, I had to ask Reinhardt what fuels his fire. “I was born in a fashion driven family; my mom is big in fashion in Indonesia and my dad works in textile” One of Reinhardt’s fondest earliest memories was drawing. Art has been his life since day 1. “Looking back at my life now it is surreal to see now in LA I get to do what I love for a living; I am seeing lots of little victories and full circle moments”

“We have poets and politicians, actors, and businessmen. I think us artists are the rare few who can tell the story visually and can make people feel through visual art. Having a voice is one of the most empowering things” Reinhardt says he wants to be an inspiration to little boys and girls around the world, saying if you have a knack for hard work, the self-love, perseverance and faith you can achieve your wildest dreams.

“The most important part has always been art and the message that comes along with what I stand for, I don’t want to worry about the money or how many followers someone has. I wanted this project to feel like my soul vomited my mind into a canvas.” In true Reinhardt style I would say, success follows happiness.

Reinhardt has created this incredible collection AZTRO but I had to ask how he found himself in the world of NFT’s. He started by saying he is surrounded by a team of strong, powerful women who just so happens to be his agents ;iKrysten McKee K-Panache MGMT, Min Lee “CM Agency + Productions” and Gina Kim Park “ARTCODED” .

Gina Kim Park found Reinhardt on Instagram around this time last year, Gina reached out and said she loved Reinhardt’s work and if he replies, “it’s meant to be”. It indeed was meant to be and from the power of a social media connection ‘ARTCODED’ was founded to collide fashion, art and tech in the NFT, web3 and metaverse space.

“When we talk about pop art, we are putting pop culture into art, we are trying to put tech into fashion but also fashion into tech, ARTCODED’s goal is to collide fashion, art and tech with the best players. There are so many people in the art space and ARTCODED serves as A bridge to create experiences and fashion stories from only the very best.”

In true fashion of hustle culture, Reinhardt has been shooting since the ripe age of 14 years old – the now twenty-something year old has been to a good deal of NFT events and spaces in the last year, he’s become familiar with the scene and the way artists are selling on the blockchain, there is no better time than now to debut on the blockchain and monetize art on a different wavelength.

“AZTRO the language of signs, is the world I’m creating I want AZTRO to feel like this magical ethereal iridescent world made out of fantasy and tech my vision if it existed as a NFT.” Reinhardt laughs humbly as he told me “I’m often not impressed with myself but this time I am, I found out with less than a month’s notice that I was doing a NFT launch show” in the span of a month WHILST spending a week away for New York’s iconic fashion week, Reinhardt pulled together 15 models, 20+ hair and makeup artists, 10-15 assistants, a studio, fashion from all around the world, incredible AI artists, shot on 3 different days, drank gallons of caffeine all whilst being in retrograde. Now that is something to be proud of.

Reinhardt goes above and beyond, he didn’t want to just ‘press the shutter’ he wanted to create a transcendent and epic collection that is uniquely his, for the world.