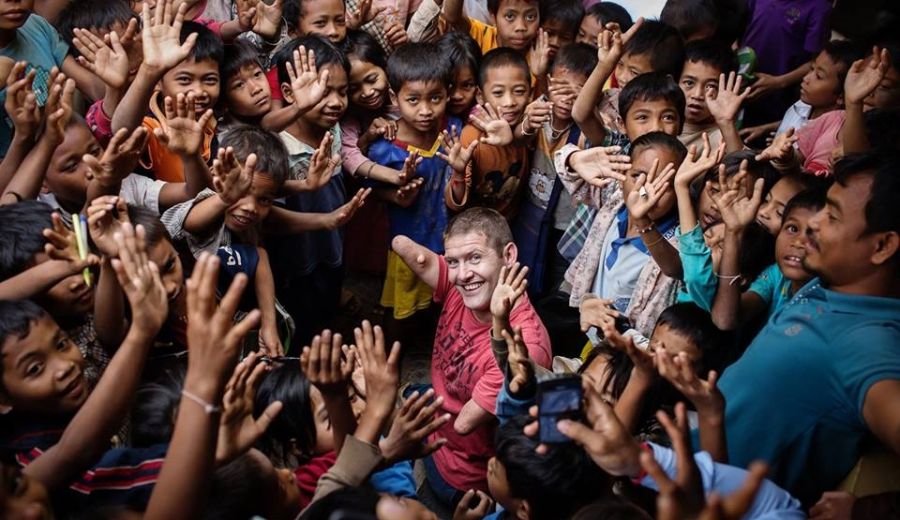 “ Not letting any limitations or destructions come in between, is what Chris Koch’s journey talks about”

Chris Koch is a renowned motivational speaker & a true world traveller making his name all over the Internet is truly fascinating to the masses out there.

Chris was born without arms and legs and despite being born in such a way he still spreads positivity all around the globe and that’s what makes him feel special. Chris comes from a countryside village like the same other kids he used to love playing road hockey and being mischievous at the school and raising his hands to help his family in farming.

His family or he never differentiated Chris into any situation, well he was treated as a normal kid and that’s how he is achieving so well in his life.

According to the sources the recent video of Chris and Sara gouda in a recent interview video discussed various things about his life growing up in a village and travelling the world and working his best to motivate the globe.

He started his small speaking tour spreading out the message around the globe saying “ IF I CAN “. Chris started the If I can program 12 years back where his main motive was to spread positive messages and inspire people who go through the same issue additionally thinks they can’t do enough.

Chris mentioned that growing up was very easy where he was treated normally, went to school normally and played sports and also helped his grandfather with farming.

Koch has travelled 28 countries and six continents, and he misses travelling after how covid hit hard on everything and everyone which was quite difficult to travel.

A Lot of people asked him how do you recover from a bad mental health situation in which he replied by saying that “ I love travelling around and spending time with my family & friends and this is what makes me happy” but since covid everything has been a mess. He mentioned that he used to wear prosthetics as a kid but hated them and they were really heavy.

Chris uses a lot of sensible humour and sayings in his presentation which makes him truly creative. He also made his appearance on Ted Show talking about his life and many more things.

Recently he was seen sharing about him at farm credit services of America in Omaha, where he spoke about his agriculture life and travel stories and whatnot.

He recently shared a documentary on youtube titled “ Make life happen” is such an inspiring documentary.

Here’s an inspiring quote from Chris Koch “ If you are worried about how you look, you are cheating yourself out of opportunity”