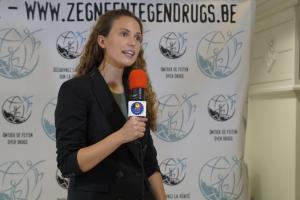 BRUSSELS, BELGIUM, July 7, 2022 /EINPresswire.com/ — The United Nations General Assembly by the Resolution 42/112 of 7 December 1987 decided to celebrate the 26 June, the International Day against Drug Abuse and Illicit Trafficking, “as an expression of its determination to strengthen action and cooperation to achieve the goal of an international society free of drug abuse.

“Supported each year by individuals, communities, and various organizations all over the world, this global observance aims to raise awareness of the major problem that illicit drugs represent to society.”

The Foundation for a Drug-Free Europe since 2004 is channeling the views of a hundred of Say No To Drugs (SNTD) organizations and groups of volunteers across Europe (including in Ukraine, United Kingdom and Ireland) whose purpose is to inform, to educate the public at large including the most vulnerable: the youth, on the harming effects of drug use. Indeed, despite what is spread by any organizations with vested interests in the business of drugs, there are no soft drugs.

It is important to remind that legally speaking, the drugs availability is strictly regulated by the International Drug Control Conventions (1961, 1971, 1988) and the Charter of Fundamental Rights of the European Union (2000/C 364/01) – Directive (EU) 2017/2103, to protect the population and prevent their illicit use. More specifically, the protection of the youth is provided by the European Charter of the Rights of the Child – Recommendation 874 (1979) and the Convention on the Rights of the Child, art.33, 1989.

But the data and legislations hardly reach the grassroots level despite the increasing efforts of the concerned institutions. Through contacts with the public, teachers, associations leaders or trainers at random from their booths/tents set up in the streets, markets, squares and by visiting shops, the SNTD teams are witnessing a striking lack of education on this vital subject, thus leaving the way open for these highly organized and powerful networks of drug dealers. So, to contribute to raise the awareness of the public, educators, community leaders and officials, the SNTD Teams are distributing freely educative booklets on the 14 most used drugs and other video educative materials provided by the Foundation for a Drug-Free World in 17 languages. “Education is the progressive discovery of our own ignorance” rightly said the philosopher William Durant (1885-1981).

All the SNTD volunteers from Europe are very concerned by this day celebration, enabling to meet and inform the public and the youth and get them involved to take responsibility to protect themselves but also their family and friends from the harmful effects of drug use.

But drug use is not just harming. Ultimately and rapidly, due to the addictive psychoactive components, the drug abuse is leading to the destruction of the user and more. The European Monitoring Centre for Drugs and Drug Addiction (EMCDDA) recently reported that “drug-related mortality accounts for a considerable percentage of deaths among young people in many European countries”. According the last estimation (31 August 2021) “at least 5,141 overdose deaths occurred in the European Union in 2019. This rises to an estimated 5,769 deaths if Norway and Turkey are included”. A dreadful ignorance!

Here after some examples from Europe of SNTD Teams in actions in the frame of the 26 June Celebration:

1) Austria
In Vienna, they held their tent at the Millennium City, a train station and shopping center, near the Donauinsel (Danube Island). The Austrian team heald an activity for children to do painting and in a very short period distributed 800 booklets, while obtaining the pledge of 40 people to Stay Drug-free.

2) Belgium
The team organized in Brussels an Open House on the drug subject followed by a 1h30 seminar in Dutch and French. More than 50 community leaders and friends were attending, very interested to get factual data on drugs. Then, they took: 22 full sets of booklets (a set contains over 20 different booklets on the most used drugs), more than a dozen info kits and DVD’s (with testimonies and short presentations).

3) Czech Republic
This year was their 18th Cyclo-run, starting on 13 June for 10 days, covering some 1200 Kms and crossing 41 towns. Along the way the “bikers and runners” met with town representatives, community leaders delivered lectures in 30 schools to more than 4,500 children, distributed 10,000 fliers and 35,000 booklets to the public, got 5 TV reports, several radios, and newspapers, raising the awareness on the untold harming effects of drug use and spreading the message on the importance of a drug-free life.

4) Denmark
A Team of some 10 persons were mobilized to held an info stand in front of the main train station of Copenhagen. This way over 2000 families received booklets from the series The Truth About Drugs. The volunteers were also able to answer questions on drugs and to get in contact with people interested for a follow-up on the subject of drugs.

5) France
Along the week thousands of booklets were hand-distributed and 160 shops visited and contributed to inform their clients about the dangers of drugs, in cities and villages across France such as in Paris (with a singer) and suburbs, Lyon, Pau, Nice, Angers, Auray, Clermont-Ferrand, Riom, Erquy, Cahors. Also, in Marseille, they got in 1,5 hrs some 272 signatures on their pledge: An Engagement to Stay Drug-Free.

6) Germany
6 brave volunteers set an info stand in the middle of the main walking street of Frankfurt. Among the visitors they had a teacher interested for his school, ladies from the Techno-Scene for a lecture, and a group of 5 teenager girls who took booklets for their friends. One came back half an hour later to take more booklets with her for more friends! In less than 3 hours nearly a thousand booklets were distributed to inform families of Frankfurt.

7) Greece
They were 15 Volunteers from the Athens team who distributed 2,500 booklets during 1,5hrs on the Piraeus harbor area and also to some shops around. The motto: “Inform people before dealers do”. Adolescents, adults and young parents, all were interested to have more data on drugs and were happy to get these informative booklets for them and friends. Many pertinent questions were answered providing the information they need to keep their children and themselves off drugs.

The FDFE and all the European SNTD volunteers are very concerned by the protection of the youth from the deleterious effects of drug use. The old saying “Prevention is Better than Cure” has a much greater implication that it seems: it encompasses not only the individual but the family circle and has a great incidence on the community and social living. Aligned with the purpose of the 26 June celebration, let us remember these words of the humanitarian and founder of Scientology L. Ron Hubbard (1911-1986): “The drug scene is planet wide and swimming in blood and human misery. Research demonstrates that the single most destructive element present in our current culture is drugs.”

The drug problem is not a fatality. To curtail the drug demand an early education of the children as primary prevention, good parental examples, the support of youth associations, community and authorities are the efficient tools. Indeed, as the old African proverb says: “It takes a whole village to educate a child”. This is the safe and sane way “to achieve the goal of an international society free of drug abuse”.