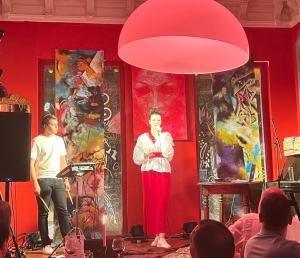 A stunning performance by Nask Taylor 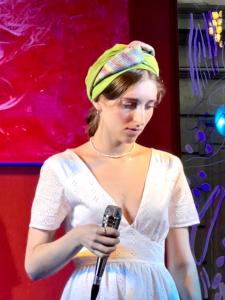 I cannot express enough my gratitude for the way friends & colleagues stepped up to support this project. This shows the level of love and support there is in Belgium for the Ukrainian victims of war.”

Proceedings were opened on the first night by Belgian Senator Mark Demesmaeker, a long time supporter of Ukraine.

In August 2015, then a Member of the European Parliament, Senator Demesmaeker was awarded, by then President Petro Poroshenko, Ukraine’s Order of Merit, taking into account his “significant personal contribution to supporting Ukraine on its reform path and while resisting the Russian aggression.”

Both artistes, following Putin’s unprovoked and vicious attack on Ukrainian sovereign territory in February of this year, left the country as refugees, and are now resident in Belgium: Anna in Brussels, and Anastasia in Antwerp.

The organiser of the two day event, Gary Cartwright said: “working with Simon Saverys, Luciano Laudon, and the team from Maison Sensi, we wanted to give these wonderful performers a chance to share their incredible talents with us, and to show them that while they are here with us they are appreciated and valued.”

He continued: “when they return to Ukraine, as they want to do so much, we want them to take away some great memories.”

The concerts were organised under the banner ‘Sensi Independence,’ July 21st being Belgian independence day, and also in recognition of the fact that Ukraine is fighting now to keep its own independence.

Anastasia, who performs as Nask Taylor, hails originally from Crimea, and is a singer, songwriter, and music producer. She has a Bachelor’s degree in music and vocals, has participated in the Voice of Ukraine talent show, and prior to arriving in Belgium she has performed in Canada and the USA.

“She has many things to say: with her irrepressible energy and drive, combined with primordial rhythms and modern synthesised sounds.Her electronic ethnic music boldly interweaves acoustic and electronic sound, distinctive harmonies and eclectic incorporation of various vocal performances.”

Her latest single, Arra Rah was released on June 20th. Anna, from Odesa, was born into a family of classical musicians. Her acquaintance with jazz began when she became administrator of the Peron No 7 jazz club in her home city.

Having moved to Kyiv, in February 2019 she first performed on stage as a member of the jazz project How Deep Is The Ocean, led by pianist and composer Oleksiy Bogolyubov.

In February 2021 she recorded her first single Bridges in the Ukrainian language, and in August of the same year became a resident of the Art Jazz School, three months later joining the freejazz project FREEBETREE led by trumpeter and composer Yasha Tsvetynski and double bassist and composer Kristina Kirik.

As well as the two concerts, Maison Sensi is also currently hosting an exhibition by Alexander Kudriavchenko, and wife Irene (who works under the name of Irene Ku).

The pair have also recently escaped from war-torn Ukraine with their family under dangerous conditions, having spent some weeks in a bomb shelter under a school in Kyiv, before they could be evacuated first to Lviv and then on to safety in Antwerp. Alexander has the distinction of of having been exhibited in the Louvre in Paris, arguably the most important art museum in Europe.

“The paintings of Alexander Kudriavchenko attract audiences not only with their perfect display of skills but also with their harmonious combination of dynamic anxiety and internal silence. His work abounds with colour, motion and challenge, and yet these aspects seem unattainable, set in a meditative state in the inner recesses of the mind,” said Markiyan Filevych, Iconart Gallery, Lviv.

Irene, an artist, illustrator and designer says of her work “Most of all I love to draw people, studying their inner world, relationship to life, relationship to the surrounding space…. Once, while drawing flamenco dancers with a simple marker, I realised that there is no more lively and driving matter than a line. You can observe the rock paintings of Altamira, or Rembrandt’s painting, or the canvases of Basquiat or Cy Twombly — everywhere we see that artists resort to the line as the main tool of the image. It creates form, and it also destroys it. So I paint portraits of people, experimenting with marker lines, trying to tame the chaos they create.”

In addition to EU Today and Maison Sensi, the art expo and concerts received generous support from: