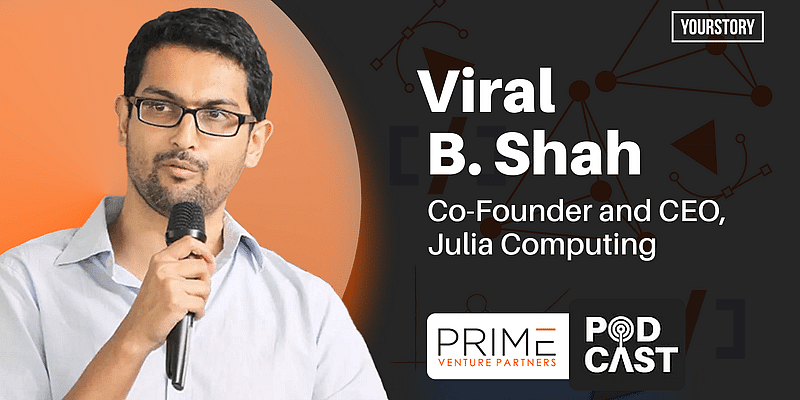 Viral B Shah is the co-creator of the Julia Programming Language and the Co-founder and CEO of Julia Computing. He and the other co-founders of the company wanted to be clear about the kind of business they wanted to build in the open-source computing industry. They refused to follow the traditional approaches of support and consulting that other open-source programming languages went ahead with once they turned into a company.

Viral aimed to see Julia as a supercomputing tool in the hands of everyday engineers and then expand to providing domain-specific software solutions to industries that could benefit from Julia.

“Build a product-oriented company instead of a service-oriented one,” was Viral’s and his team’s success mantra with Julia Computing.

Designed specifically for high performance scientific computing, Julia is a programming language, which is now used by over 10,000 companies and 1,500 universities globally, with 29 million downloads.

Being sure about the business model

According to Viral Shah, Julia already had market demand when he and his co-founders launched the programming language as a company. Hence, they were profitable from day one.

“But the trend with open-source businesses is that they go into this human-intensive support and consulting niches, which would have taken away time from us to customer support instead of building Julia,” he adds.

Their common idea was to run Julia as a product-oriented enterprise and scale on their existing USP rather than deviating completely from their core business.

“We raised our first round of funding in 2016 and got to Series A only in 2021. And throughout this time, we were unclear about our business model. We knew what we did not want but had to figure out the market pathway that we did want to take,” says Viral.

Julia is 100-1000x faster than MATLAB and Python, and Viral wants to take advantage of the benefit they already have. Now, Julia Inc. is trying to create Julia Hub that any engineer can access and use the power of supercomputing without having any specific high-level knowledge.

“We were all using Python, C, and Java to execute our ideas or run simulations, but the library dependency of these languages made them terrible. The world back then had accepted that you could not have high-level language and easy-for-production language together. With Julia, we wanted to solve this problem and we created something that was way faster than any other language,” explains Viral.

Researchers and professors were Julia’s first users. The academic community was struggling with slow programming languages and Julia presented a solution. Soon, the finance industry picked up the language to automate various analysis and management requirements and it was this step that compelled Viral and his team to transform Julia into a company.

“Everyone wanted a dynamic programming language that understood both what the humans and the machines wanted. We gave them that and Julia has never had a lack of demand in the market,” says a proud Viral.

How can entrepreneurs use Julia?

Viral says that of the 10,000+ companies that use Julia today, most of them are startups. And he specifically knew around half a dozen startups that exist only due to Julia.

“Our motive was to create a programming language that would combine the simplicity of Python with the performance of C. This benefit enables many entrepreneurs to build powerful applications in multiple domains,” he adds.

Viral went ahead to state that entrepreneurs are using Julia today to build healthcare applications, pharmaceutical applications, energy analytics software, and machine learning tools. Plus, Julia is also dedicated to offering domain-specific software solutions, which should help many startups to bring new technologies in a variety of industries.

To know more, please listen to the entire podcast here

03:48 – Why build another programming language?

19:10 – How interested is the Indian software community in Julia?

33:02 – What is next for Julia and Julia Computing the company?