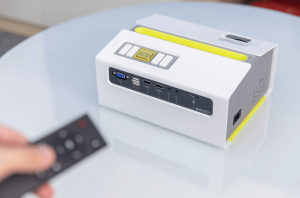 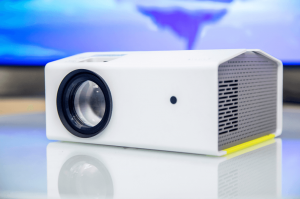 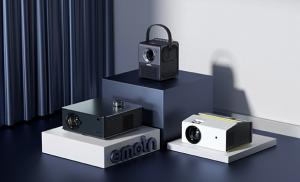 Emotn recently released an LCD projector, Emotn C1, at a low budget price of $179 positioned as the mid-to-high-end multimedia projector.

BUFFALO, NEW YORK, UNITE STATES, December 4, 2021 /EINPresswire.com/ — Emotn projector recently released a new multimedia LCD projector, Emotn C1, at a favorable price of $179, which is acceptable for users who are on a low budget while seeking high quality.

Emotn is a young and energetic innovator specializing in projectors, TV boxes, and Android TV applications. As its first released projector, Emotn C1 is positioned in mid-to-high-end LCD multimedia projector at an affordable price under $200.

Emotn C1 projector has a bold and recognizable design in appearance. The top of Emotn C1 adopts the “roof” shape design, and the body material is a white polymer material, which is wrapped from the top to the bottom. A groove is carved out in the middle of the top for remote controls and mobile phones. On one side of the groove are the keys, and on the other side are the focusing gears. The groove at the top and the anti-slip pad at the bottom are made of silicone in a youthful fluorescent yellow. The two sides are gray honeycomb cooling holes. Overall, the collision of grey, white and fluorescent yellow colors makes the projector design more fashionable and youthful.

As for the remote control, it uses an infrared connection, whose signal is more stable. The texture of the remote control is also skin-friendly, and there are simply thirteen keys on the control that you can completely blind control when you are familiar with the position of each key.

Emotn C1 has a built-in 5W speaker so it’s no need for an external speaker. The sound quality performance is stable and not any sound distortion. In addition, Emotn C1 projector can also be used as a Bluetooth speaker. After entering Bluetooth speaker mode, the optical device will automatically turn off, and the internal radiator will also stop working so that the auditory will not be affected.

Eye-Protective and Safe for Children

Emotn projector is different from the direct light-emitting principle of the TV. The light of Emotn C1 projector is projected on the wall or on the screen and diffusely reflected into the eyes, reducing eye irritation. Compared with the TV, it protects the eyes and eyesight, especially for children, it’s more safe and friendly.

Emotn C1 is a Linux system multimedia projector, it’s no need to log in to any account, and it won’t collect any personal information. Emotn C1 protects every user’s privacy and provides more safety to society.

From the design to the price, Emotn C1 projector is aimed at the young generation. Its design is youthful and the color scheme is fashionable. At the same time, the price is only $179, which is very favorable to many young users. Of course, its image quality is far more than the same price competing product projector. Currently, the Emotn C1 projector is on sale on the Emotn website, visit for more information:www.emotn.com

Laboratory Equipment and Disposables Market to Reach $4,960 Million by 2026: IndustryARC

Laboratory Equipment and Disposables Market to Reach $4,960 Million by 2026: IndustryARC