HomePress ReleaseEIN PresswireComedy Magician Dewayne Hill has been nominated for Best of the Bay...
EIN Presswire 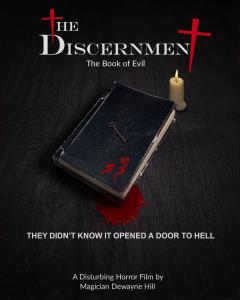 Repeat nominations is flattering and very humbling. I just want to produce good products that the audience responds to, so being nominated gives me great feedback to keep working.”

TAMPA, FL, UNITED STATES, August 16, 2022 /EINPresswire.com/ — Corporate Comedy Magician Dewayne Hill has been nominated in five different categories in the annual “Best of the Bay” by Creative Loafing magazine. Dewayne is in contention for Best Magician, Best Stand-Up Comedian and Best Family Entertainer for which he took home the winning honors of 2021. The magician produced and directed an independent thriller/horror film that has gained national attention called “The Discernment, The Book of Evil”, which has caused the magician to be nominated in two additional categories of Best Filmmaker and Best Actor. Voting is underway and will end in September.

“Repeat nominations is flattering and very humbling. I just want to produce good products that the audience responds to, so being nominated gives me great feedback to keep working,” Hill said.

Creative Loafing Magazine is a publication that reports news, trends and city life, best places of business and entertainment news. Best of the Bay is an annual award ceremony where they give awards in various classes, including Arts, Food, Beer, Services and Entertainment.

Winners will be announced Sept 29, at the Hard Rock Hotel and Casino for the awards ceremony.

The magician’s LIVE show tours the United States for various corporate events, conventions and conferences. He is also sought for high end and celebrity 50th and 60th birthday parties. The magicians film will debut in the fall of 2022.

Here are the voting links:

The Indigenous Group of Seven

The Indigenous Group of Seven