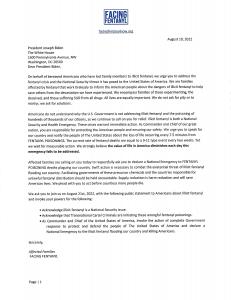 Letter to The President

DENVER, COLORADO, UNITED STATES, August 9, 2022 /EINPresswire.com/ — Colorado Fentanyl Prevention and Awareness Day event is at the Lincoln Park across from the Denver Capitol from 11 am to 2 pm on August 21st, 2022. The Colorado Professional Firefighters Honor Gaurd is presenting the memorial for families and friends of victims. Speakers include John Kellner, District Attorney for the 18th Judicial District, Cole Finegan, United States Attorney for the District of Colorado, and Waltrina DeFrantz-Dufor, PH.D. Director of the Collegiate Recovery Community D.U. Naloxone and prevention materials will be available to the public at no charge. The event is free, and everyone is welcome.

Families affected by illicit fentanyl have come together for a unified nationwide push to address the illegal fentanyl crisis in Colorado. Colorado is one of 28 states where advocates and affected families are holding events to spread awareness and prevention of the dangers of illicit fentanyl on August 21st.

Affected families requested a proclamation from the State and The City of Denver to help promote the day in Colorado and have been granted both. Other states and cities have issued proclamations and are receiving them to assist in their push for awareness.

NATIONAL FENTANYL PREVENTION AND AWARENESS DAY™ AUGUST 21st was established to remember those lost to illicit fentanyl poisoning and to acknowledge the devastation this drug has brought hundreds of thousands of affected family members and friends. The national day is observed on August 21st, starting this year. August 21st is a day of a coordinated response from fentanyl awareness organizations and affected families sharing their lived experiences as part of a whole group warning and informing our youth, the public, and the unsuspecting.

Illicit fentanyl is a synthetic opioid that is 50-100 times stronger than morphine. Cartels deliberately press fake pills to deceive and addict our most venerable population. Fentanyl is found in every type of street drug today. There are misconceptions that drug testing and fentanyl antidotes are always effective. The only sure way to protect yourself is never to take anything that is not prescribed to you and only purchase from a legitimate pharmacy. Youth are dying from buying fentanyl on social media sites like Snapchat and e-commerce sites. In 2021, 77% of all teen deaths involved fentanyl. Fentanyl is highly addictive and often leaves little room for recovery. Illicit fentanyl is a drug like we have never seen before. More potent drugs are on the horizon, as unimaginable as that seems. Our priority is to alert the American public about these dangers.

Facing Fentanyl issued a plea to The President today to declare a National Emergency to the FENTANYL POISONING deaths plaguing our country. Swift action is necessary to combat the existential threat of illicit fentanyl flooding our country. Foreign Governments facilitating these precursor chemicals and the countries responsible for unlawful fentanyl distribution should be held accountable. Supply reduction is harm reduction and will save American lives. We are pleading with the President to act before countless more people die. The letter to the President is open to the public on our website to sign in support of our efforts.

The poisoning of hundreds of thousands of Americans due to fentanyl deserves immediate action and complete government response. Our letter urges the President to acknowledge that illicit fentanyl is a National Security and a Public Health crisis. The current rate of fentanyl deaths equals a 9-11 type event every two weeks. Yet we continue to wait for measurable action. We strongly believe the value of life in America diminishes each day this emergency fails to be addressed.